I’m so drained from this year’s U.S. Open tennis tournament, which finally ended yesterday after over two weeks, that I cannot even express it to you. Even though I’m basically pretty disappointed in the results, I’m really grateful to it for being on during my recuperation from hand/wrist surgery. I was feeling so bad for all the losers that I didn’t have too much time to feel sorry for myself! 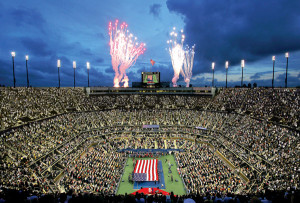 The highlight match of the whole tourney for me was the men’s semifinal between Serbia’s Novak Djokovich and Switzerland’s Stan Wawrinka. Novak is number one in the world and Stan is number nine, which is still pretty impressive. But Novak had blown through all his previous opponents, while Stan had to go the distance with some of his. Novak was expected to win by a mile, but got shocked when Stan stayed toe-to-toe with him. Actually, Stan was beating Novak for most of the match! It was just fabulous tennis, and even though Novak did win, Stan held his own and was so great that they even interviewed him after the match! What a tribute to him; they never interview the person who lost the match at these types of tourneys. This one was incredible one to watch.

Okay, so the saddest part to me is Roger Federer going out in the fourth round. But once I got semi-over that, I was able to relax for the most part. I like most of all the players so I really didn’t root for many people in particular, which makes the whole situation a little less fun. I just rooted against Serena Williams, and against Rafael Nadal, but for different reasons.

I root against Rafa because I don’t want him to come close to Roger Federer’s record of wins in the Majors. (Roger has 17 while Rafa and now has 13. And the latter is a lot younger than the former.) I still like Rafa and think he’s a really nice person, and that he conducts himself in a sportsmanlike manner. And he still lives at home, at twenty-seven, so he’s also a good family boy!

I root against Serena just because she appears to be not too nice or popular of a person, and she’s a real phony, on every level. I don’t have time to go into all the reasons I dislike Serena, but I’m sure if you put her name in the search section of this e-zine, you’ll find some of them through the years.

Plus, I really like her opponent in the final, Victoria Azarenka. I find her to be so mentally tough. While Mr. X and I were watching the ladies final, which Vika did eventually lose to Serena, to our dismay, I told him that I wish she’d write a book telling the secrets to a strong mind, iand I would be first in line to read that.

So I wanted her to beat Serena, which didn’t work out for me, and the next day I had sat there and watched Rafa beat Novak. So, suffice it to say that this was not a great U.S. Open for me.

But as Mr. X says, I shouldn’t keep taking all these losses personally. So, I’m going to try to rise above. And carry on with all the pressing matters in my own life. And hope that I’ll be such a winner that nobody will have to feel bad for me! (Okay, that is the schmaltzy-est last sentence I’ve ever written in all my writing gigs, not just in this e-zine. But I think I’m a little punchy because I’m finally getting my stitches out today. But I’m keeping that sentence in to remind myself one day of how pinched my ailing hands were making my brain. Okay, again, I’m going to quit while I’m ahead right now. Okay, for the third time, I know I’m not really ahead right now, but I just wanted to end this column already. So please forgive me on the now multiple closing schmaltz-es.)