Fresh off the heels of the emotional (for me, and not in a good way,) Olympics tennis competition, here comes the last major tournament of the year, the US Open.

As much as I really can’t bear the thought of sitting around for two weeks watching more sports, I can’t help myself. I’d hate to miss all the tennis action. I usually watch every second of this one and Wimbledon, and love it, especially when Roger Federer and Kim Clijsters win. That’s so satisfying to someone like me who believes in fairness, and always roots for good people. 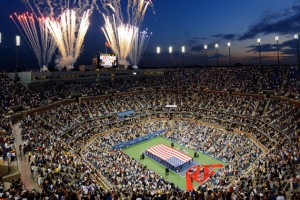 Last year, I was in New York helping out my mother, so I watched only a bit of the tourney, here and there. She actually watched most of it, but since I was doing everything for her, including outside the house, I missed most. I wouldn’t have had it any other way, though.

But, somehow, I fell behind in my tennis knowledge a bit because every time a commentator references what happened in Forest Hills last September, I’m a tad confused. It’s no biggie, though. Believe me, I would rather miss everything if I still had the chance to be with my mother.

Anyway, back to the US Open. Here’s some of what I hope and expect:

After Roger Federer won the silver medal at the recent Olympics, while #2 in the world Novak Djokovic came away with nothing, their rivalry continued last week at the Cincinnati Open with Roger winning that one in a stunning two-set rout. With now #3 Rafa Nadal having to sit out the US Open, due to knee problems, we still have the Roger-Novak situation to look forward to. And let’s not forget about Scotland’s Andy Murray, who just upset, (in more ways than one!,) Roger to win Olympic gold.

On the women’s side, this will be Kim Clijsters last tournament. She’s retiring afterwards, which is a great loss to the sport. She’s everyone’s favorite player and is touted to be the nicest girl in tennis, an assessment I wholeheartedly agree with. She has too many injuries, and a young daughter, and wants to have more children. So, sadly for us, this is it for her. I’m praying she goes out with the Championship in hand for the fourth time!

Because I was in New York at this time last year, entertaining my little mother and hanging out with Mr. X, I didn’t do my usual sitting in front of the TV watching every second of the tourney. As a matter of fact, he and I spent the entire Super Saturday with his pals in Jersey, so I not only missed the men’s semis, but the women’s final! Since Serena Williams was in it, I really didn’t care much because I just can’t stomach watching her bad sportsmanship.

But, just the other day, I noticed that the Tennis Channel was showing it! (Love that channel!) So, knowing that she had lost to Sam Stosur, the Australian player who made this her first Grand Slam title, I knew it was safe to watch and I wanted to see what unfolded. Lo and behold, there was Serena, threatening yet another female referee when she didn’t like a call. She told the woman to make sure if she sees Serena coming down the hall, to “look the other way.” She even pointed her racket at the ref and shook it at her.

How is this horrible sport allowed to still play the game? She’s one attack short of Tonya Harding!!! If she wasn’t still the only American player, of either sex, who does well, I think she’d be out of there. Or, sad to say, if she was white. I think the higher-ups in the mostly lily-white sport don’t want to look like racists if they sanction a Williams sister. But, after Serena’s second threatening of the officials in three years, it should be over for her already. And we would all be spared from watching her evil antics anymore. She should be kicked out especially because she’s an awful example to young up-and-comers. If she were in any other sport, basketball, let’s say, she would have been banned long ago. Shame on the US Open for not banning her for life after, in 2009, she threatened to “shove the ball” down the throat of a linesman whose call she didn’t like. As I still maintain today, that should have become a police matter.

All that being said, I’ll be glad for the distraction these next two weeks. I still plan to publish week-daily columns, but right now, I just began suffering from my first case of writer’s block. So hopefully, by concentrating so hard on something else, my journalistic mind will return by tomorrow. (It just has to because I have two fabulous shows to tell you about this week!)

And, if you have any ideas of what you’d like to see my opinions on, please feel free to leave it in the Comments section below, and I’ll try to accommodate all the reasonable ones. And tell me if you want me to give you the credit, (or blame,) for your suggestion.