Yet another of my crazy obsessions begins today–tennis’ U.S. Open. I watch every second of it, as I do Wimbledon. But, as this is held in New York, as opposed to England, the times work out better for me, because I like to watch it live, for several reasons. One is that if the broadcast goes over the time allotted by the network, they often change to another station, which we, the viewers, wouldn’t know about unless we were watching live.

Another is that I’m always afraid someone will leave me a message, or send an email, with results before I see them for myself. (Rules Of Engagement echoed my mania recently on an episode where Jeff went to a party hoping no one would ruin a hockey play-off for him, which he was recording at home. So I guess I’m not the only one who’s nuts. Well, in that category anyway.) 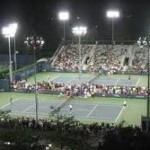 So, I’m letting you know about my hermit status for the next two weeks, just in case you try to get in touch with me and I don’t get back to you right away. Most of my communications will be in the middle of the night, when I finally get a second. [Note: I will still be posting all my Emmys Suites and Musings columns daily this week, so please check back for them. They’re juicy!]

People always ask me why I have to watch every second of the tennis proceedings, and not just the finals. My answer is that, as in life, I’m all about the journey. Without the journey, the results don’t mean as much.

And I can enjoy this year’s U.S. Open more than many of the others I’ve lived through because Serena Williams won’t be there. Yay! She always makes my blood boil with her poor sportsmanship, excuses, and so-much-less-than-gracious play and press conferences. We can relax now and let the best, and hopefully nicest, who would be Kim Clijsters for the ladies and Roger Federer for the men, win. Speaking of Roger, I’m so glad that he’s returned to winning form over the summer. He had had a bad year, for him, though most other players would be thrilled with his accomplishments. My little mo and I love him because he’s one of the classiest athletes ever, in addition to being the greatest tennis player of all time. We really don’t want this era to end. So, of course, we’re pulling for him with all our might.

So, if anything really interesting happens, like the once-in-a-lifetime Isner-Mahut match from this past Wimbledon, or Serena’s meltdown at last year’s Open, I will keep you posted. (I’m assuming, of course, that most of you aren’t as nutty as I am, and are going about your daily lives, rather than being glued to ESPN all day and night.) And, if I do venture out to any events during this fortnight, I’ll let you in on those goings-on, as well.