First of all, major congrats to Ladies’ Champion Petra Kvitova; Ladies’ Doubles Champs, Sara Errani and Roberta Vinci (who completed a career Grand Slam with this victory); and young Gentlemen’s Champs, American Jack Sock and Canadian Vasek Pospisil. [Note: It was very strange of ESPN to never show the doubles matches, outside of the one (and strange beginning of another) of the Williams sisters. I would love to know which idiotic higher-up made that decision, especially with three of the four Men’s Doubles competitors being the only Americans left in the second week!] 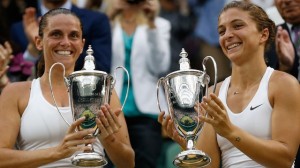 And just normal-sized props to Men’s Champion, Novak Djokovic. I can’t give him more than that because he’s caused me all sleepless nights since his victory over my beloved Roger Federer. I’m one of the few who likes Novak, but not in this instance.

Other than that, here are my final week’s musings on the Wimbledon tournament, in general. I always take daily notes as the coverage wears on. But, you may notice that this time I left-out Wednesday, Friday, and Sunday. Can you figure out why? Those are the days that Roger Federer, the stranger I love most, was playing in the quarterfinals, semis, and then the final, and I could not take my attention away from the screen. I barely even remembered to breathe on those days!!!

The only young one, Wimbledon Champion Petra Kvitova, on the right, is wearing sleeves!!!

I just finally realized why the wardrobe choices! It’s menopause city on the set, with all the older women wearing sleeveless dresses, and men in full suits. 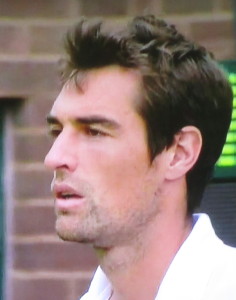 Just like with the usage of “fewer” and “less” (which I explained at the end of this column yesterday: itsnotaboutme.tv/news/sports-thoughts-wimbledon-2014-wrap-up-part-i,) many people, including all the tennis commentators, don’t seem to know the difference between “amount” and “number!!!” I’m always shocked by it. You cannot say, “The amount of points.” If something can be counted, it’s “number.” Period. If it cannot be counted, as water in the ocean, it’s “amount.” Get it? Good. Now send it on to all the sportscasters you know! And give them my regards!

Have I mentioned how gorgeous Jeremy Chardy is lately? He should be doing fragrance ads!

I’m with John McEnroe–it’s not fair to push Roger’s and Rafa’s Monday matches to another day because their potential opponents are behind a day, due to rain. 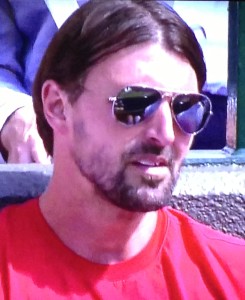 Goran Ivanisevic. How can such a gorgeous man have such a horrible hairstyle! Photo by Karen Salkin.

Just when you didn’t think that ESPN host Chris McKendry could not get more annoying–she does!!! I finally figured out who she talks like. The Kristen Wiig character from the “Password” sketch on SNL! The one who’s a has-been Broadway actress with those phony-baloney “r”s. Her way of speaking is so creepy.

Former Champion, (and current coach of Marin Cilic,) Goran Ivanisevic is so gorgeous, so why is he wearing that disgusting hairstyle? It looks like a joke.

Djokovic gave his opponent, Jo-Wilfried Tsonga, a disputed point in their quarterfinal match, as he did for another opponent in an earlier match! Such fairness is rare indeed. 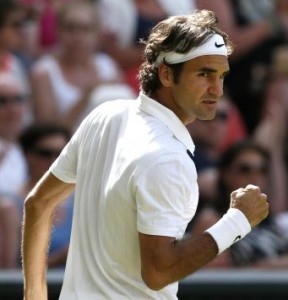 Look at Roger Federer’s dry hair, face, arms, and shirt. And this is in the middle of a match!

I just realized something–I have never seen Roger Federer sweat!!! The other guys will be dripping and disgusting, and, win or lose, Roger’s always cool as a cucumber. And his hair is always gorgeous and shiny…and dry! Love that guy!

I have to also give props when they’re deserved. Chris McKendry segued from discussing Serena’s “illness” to an interview with Novak Djokovic very well.

That whole doubles match craziness with the William’s women was so rude of Serena. (In case you missed it, I broke it all down for you here: itsnotaboutme.tv/news/sports-thoughts-new-serena-williams-problem. And then the ESPN peeps finally sort-of came out against her, too, which never happens! More proof that they must be reading this e-zine!)

I’m sure she faked it, and will then “be diagnosed” with something that will “explain” why she lost in singles.

Yeah, right, her boyfriend/coach hasn’t “seen her for a couple of days” before a doubles match.

Announcer Chris Fowler has always been the most literate one on the set, but he kept mispronouncing competitor Nick Kyrgios’ last name as “curious!” And he wasn’t joking, ala Brad Gilbert. Very annoying, especially since he said it at least a hundred times, which made my ears bleed!

I can’t put my finger on why I don’t like Eugenie Bouchard. I think some might think its because she’s the prettiest, and I have female jealousy, but I don’t think that’s it at all. Even though I can be as envious as the next person, I’ve always been swayed to root for certain females in life because they’re good-looking! It’s a carry-over from when I was a little girl and always admired pretty females as role models.

ESPN people—Please stop anointing her “the darling,” because no one cares about her except Canadians!!! Why isn’t it French Open runner-up, and last week’s #3 seed, Simona Halep, more important, at this point in their careers? It’s because Genie is basically good-looking.

But I hate her manly voice!!!

And she’s none too bright. She actually uttered this sentence: “I was always very self-confidant in myself.” Duh.

And she’s one of those dummies who think there’s an “s” on the end of “and.” 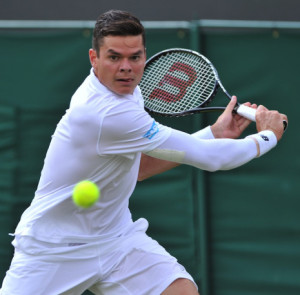 Milos Raonic. This is who John McEnroe thinks looks young! I think he looks like he’s on the Seniors Tour!

John McEnroe thinks Milos Raonic looks young?! He looks fifty to me! Like Randolph Scott in a movie about a tennis player! And John also said of him, “We gotta style him up a little bit more.” Agreed, but how is Johnny Mac the style expert???

Poor Hannah Storm always tries to get in there with awful segues.

Interesting–all the female semi-finalists have light eyes and hair, and the four men have the opposite.

I finally realized why Lucy Safarova’s eyes always look the best–she’s one of the very few women who wears eye make-up on the court!

I swear, someone at ESPN is reading ItsNotAboutMe.TV because several of them, especially Pam Shriver, seem to be listening to me! She finally pronounced “Kvitova” correctly, (for the first time ever!,) washed her hair, put on make-up, and stopped wearing sleeveless dresses! That’s too much to be coincidental. Plus, now the analysts all discussed that perhaps Serena Williams is not being truthful about her supposed virus that made her withdraw from the doubles, which they have never, ever done before!!!

But who is the ESPN wardrobe person??? I’m so glad that Pam is finally wearing tops with sleeves, but who put together her sixties outfit today? Cobalt blue pleather pants with a neon fuchsia top, and–I don’t even want to be writing this–a white plastic belt!!! Triple ugh.

I finally figured out why I don’t like Genie. She’s not cute or sweet or funny or particularly intelligent. She’s just a blank pretty girl, which are a dime a dozen out here in Los Angeles. I like sweetness like Kim Clijsters, or amusing like Victoria Azarenka. 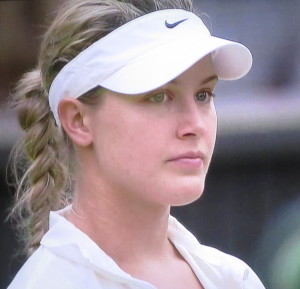 To ESPN: Enough with Eugenie already!!! No one likes her, or cares about her! You guys are trying desperately to make someone other than Serena and Maria Sharapova famous. You all think that that will help tennis, in general, but players have to earn the respect and accolades. She’s done no more than Vika Azarenka and a few others, but you guys just want to promote someone. Young guys, and even some girls, may care, but the rest of us care only about great play, kind players, and some drama, not a piece of attractive vanilla fluff.

They’re just trying to get people to watch, no matter how. And advertisers are thrilled to get a younger Maria Sharapova, looks-wise. That’s what made Maria famous, not anything else. Even when she was sucking on the court, she was selling products.

When Eugenie had the worst loss ever seen in Wimbledon history in the Final, Mr. X said of her, “She thought she was better than she is.”

I’m thrilled for Petra Kvitova to have a) won the Championship, and b) beaten the Bouchard girl. Genie was a bad sport, which should have been a surprise to no one.

The analysts all predicted Genie to win. Then they said that she didn’t lose it, but rather Petra didn’t give her a chance to win. Exactly…she lost!

Even Andy Murray had more emotion when he lost his first final! And he’s practically flat-lining all the time. 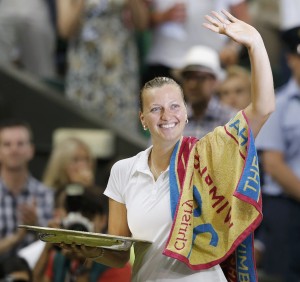 Glowing Ladies Champion, Petra Kvitova. I love the glorious lighting on this photo of her that I found on-line, taken by a female photographer, of course! Photo by: REUTERS/Suzanne Plunkett

Petra, on the other hand, was gracious and humble. And somehow, she got better-looking after she won! I never saw so many people want to double-kiss a female. They all seemed to love her!

Chris McKendry said of Kvitova, “We heard her even talk about it, there was fear she might have been a one-hit wonder.” She never said anything remotely like that! Don’t put stupid words in her mouth! Idiot.

Genie called her “my opponent,” rather than “Petra.” Bi-atch.

I’ve never trusted girls who don’t have friends. And Eugenie makes a point of telling us that she purposely has no friends on tour!

Maria Sharapova at least giggled as a young girl, which this one is missing.

She also needs to stop adding esses to the ends of words that end in “t”s and “d”s, such as “and.”

If she wasn’t nice-looking, they would never have shown almost her entire post-final press conference.

Conversely, I know love Petra, about whom I never knew much.

There will be so much more on my dislike of Eugenie Bouchard tomorrow. A creep like this definitely deserves her own column! So stay tuned. And hold onto your hats!