The US Open tennis tournament seemed especially long this year. I’m sick for Roger Federer over his loss in the semi-final, but thrilled to see how great he played throughout. He can hold his head high—he lost to Marin Cilic, the young guy who won the whole thing in the next round.

So, big congrats to Marin. He really was impressive in his last four rounds. And Mr. X’s father was full Croatian, too, so it’s nice to keep it in the fam. 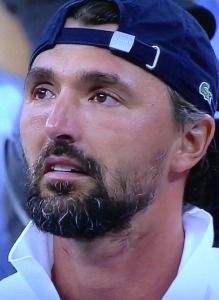 Goran Ivanisevic being proud of his charge for winning the whole thing. Photo by Karen Salkin.

If you’ve been following me on twitter, (@MajorCelebrity,) you know that I’ve become a big fan of Marin’s new coach, the stunningly gorgeous (and former Wimbledon Champion) Goran Ivanisevic. I never saw him play that much, but I sure paid lots of attention to him in the stands these past two weeks!

So, let’s wrap-up this tourney with first a re-cap of some of my tweets about it, and then my final thoughts on it that I saved for today. I didn’t write them down in exact order of play, so I apologize for not doing things in my usually linear-thinking way. (And the new ones are basically just about the last few rounds.)

[Note: I put the rest of the pix at the bottom this time because there are too many to share the space with the text.]

First, the most recent tweets:

How rude of @espn to not show us the interview with @EVesnina001 and #EkaterinaMakarova after their defeat of the #WilliamsSisters!

I don’t know which lady to root for now!  I like 6 of the 7 left; all except #SerenaWilliams. So I’m going to be sad a few times.

@Pengshuai1 is the loveliest winner since @KimClijstersPro!  So happy for her.

Love that @vika7 is so classy. She gave full credit to the girl who beat her, and didn’t even mention she had food poisoning.  Serena Williams needs to take lessons from her.  Serena not only doesn’t give anyone else credit when she gets beaten, but she makes-up fake illnesses!!!

Roger Federer has the most gorgeous hands I’ve ever seen!!! (Sorry—they move so fast, I have no pix of them for you.)

Conversely, why does creepy Genie Bouchard wear kabuki make-up on her face? It’s just so weird—it really stands-out from her tan skin.

And what is up with Boris Becker’s elbow? Mr. X pointed it out to me, and I assumed he had just bumped it, but it appears permanent. Talk about tennis elbow!!!

I love that Vika Azarenka and Gael Monfils are best friends!!!  That’s so perf.

Once the team of Ekaterina Makarova and Elena Vesnina beat the Williams sisters in the quarters of the doubles, we never heard of them again!!! I swear, I watched every second of the coverage on ESPN and CBS, and even some on the Tennis Channel, and they never mentioned the Ladies Doubles after the Williams’ got eliminated. Disgusting of them. I actually had to just look up the final results right now! And guess what—Makarova/Vesnina won the whole thing! I’m so happy for them, even if ESPN and CBS are not!

Okay, I know I didn’t comment or tweet about Kei Nishikori’s bad teeth, but when I first noticed them, (in his colossal win against Milos Raonic,) I was too exhausted to debate with myself as to whether that would be helpful or unkind. Now that I’ve had several days to think about it, I realize it would, indeed, be helpful to him. If his team doesn’t care about his marketability to tell him to at least whiten them, someone has to, and I guess it falls to me. He’s a cute young guy otherwise, but when he smiles, it’s just gross.

(And now that I know that Kei’s the fifth biggest money-earner on the men’s tour, mainly due to his Japanese endorsements, I’m shocked that he never fixed his teeth before! He can definitely afford veneers!!! Or, at the very least, braces and whitener! They could be whole new endorsements for him, too!)

And while we’re on looks, what is up with Serena’s tattooed brows? Doesn’t she have enough money to get them looking better than that?! It’s been awhile now.

At the end of Roger’s stunning loss in their semi-final match, Roger told Marin at the net, “I’m happy for you.”  And he meant it.  What a guy.

I never realized that Goran Ivanisevic was so gorgeous when he was playing. I think it’s because he beefed-up a bit now, which is sexier. And I’ve never, ever thought a guy with a beard is attractive before. Ever. Really.

At the depressing end of the women’s final, how rude of Serena to lie there in her victory, keeping her opponent, and supposed best friend, waiting at the net for almost a minute.
That was a nice, sweet, classy speech from runner-up Caroline Wozniacki.

Did anyone else notice that the crowd always lowers their cheering when Serena is announced or talks? It’s very obvious.

I think the only honest thing I’ve ever heard come out of Serena’s mouth was her getting emotional at her win.

I don’t think anyone could have handled this loss better than Caroline did.

Why do the commentators refuse to say that Serena’s “coach” is her boyfriend?  They out everyone else’s private life, but won’t mention this because he was a married man when she started up with him.

How can they say that Serena is the greatest, when Steffi Graf has four more Majors titles, and could have kept going? And Steffi had much tougher opponents than Serena’s had over the years.

And most shocking about the analysts is that they still laud Serena, even after that evil (and criminal, in my opinion,) abuse of the lines-woman here five years ago!  She threatened to “shove the ball” down the lines-woman’s throat, for goodness sake! Over a correct call! And she never even apologized and repented! She should have received a lifetime ban from tennis for that! And the woman should have filed criminal charges against Serena! Maybe the ITP should take a lesson from the NFL over this Ray Rice situation!

Okay, that topic riled me up so much that I have to go calm down now.

But, if you missed my bon mots on the first week of the US Open, you can always check them out here: itsnotaboutme.tv/news/sports-thoughts-us-open-2014-updates

And, that should be it for my tennis reporting…until next June! I usually sit-out the Australian and French Opens for some reason. Maybe because I just don’t have the time to watch every second of them, and I wouldn’t do it any other way. 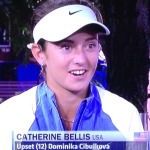 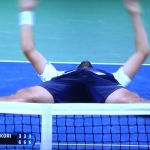 Marin Cilic after he won the Championship. I’m just being silly and immature here, but is that…or was he just excited about the win? Photo by Karen Salkin. 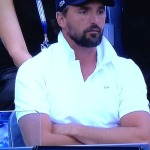 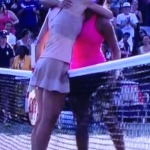 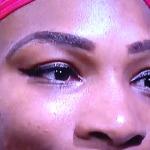 What is up with Serena Williams’ brows??? Photo by Karen Salkin. 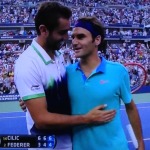 Roger Federer, on the right, telling Marin Cilic, who just beat him in the semi-final, “I’m happy for you,” and meaning it! What a man! Photo by Karen Salkin. 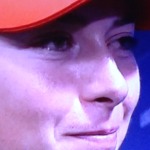 I’m not being mean, but just look at Maria Sharapova’s mustache? It didn’t come out good enough in this pic, but many of the girls had them! Don’t they know enough to have them removed, without me having to tell them?! Photo by Karen Salkin. 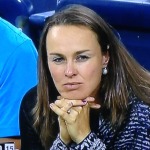 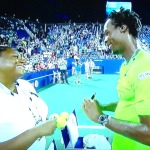 I love this moment! Entertaining Gael Monfils shared and eye-contact laugh with oen of the workers. Nice guy. Photo by Karen Salkin. 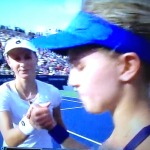 Eugenie Bouchard, on the right, giving one of the coldest handshakes I’ve ever witnessed to the girl who beat her, Ekaterina Makarova. She wouldn’t even look at the victor! Photo by Karen Salkin. 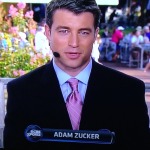 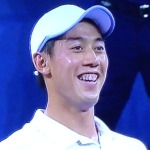 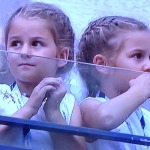 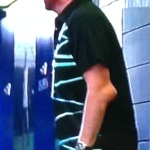 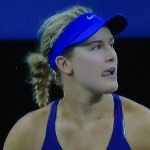