I seriously did nothing this past holiday week-end outside of watch the US Open! It took me forever, but I’m finally caught-up. So, I’m too bleary-eyed to transcribe my notes into coherent sentences.

I can’t even tell you on which days I wrote each one. But I didb;t want to let more days go by without weighing in on my second favorite tennis tourney, so here they are, as incoherent as some (or many) of them may be.

They’ll be followed by some of my tweets from throughout the tournament, which I’ll continue to do for the duration, so, if you’d like to see them, please follow me @MajorCelebrity.

And I’ll publish a whole wrap-up next week, after the Monday Men’s Final, of course, with better (and more) photos, as well. 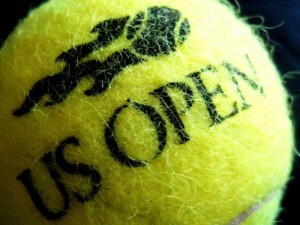 I’m so sorry, but even though I’ve taken hundreds (literally) of photos during this tourney, to go with my “reviews,” we just couldn’t get them in here in time for publictaion today. We’ll add them all to next week’s US Open Wrap-up.

The best part of the Bellis long match is that ESPN almost totally ignored the Eugenie Bouchard one. Ha!

Hey announcers–Genie Bouchard is not the “it girl!” You’re trying desperately to make her so, for some indecipherable reason, but she’s not. The stadium was practically empty for her night match that night!!! All she is is pretty.

I wish the ESPN peeps would stop making excuses for Venus Williams. Everyone has physical crosses to bear, but they don’t announce those every second. In the past, Roger Federer has had a bad back, mono, etc., but they never talk about that.

The ESPN announcers obviously don’t know the meaning of the word “gracious” to always say that Venus Williams is it!

Why do they never show the celebs??? Finally, on night four, they showed a quick montage of them, which included Clinton and the Timberlakes. It would have been fun to see which matches they were actually at. But they did show Michael Jordan ad nauseam, and Alec Baldwin the same.

I love that Novak Djokovic is so honest; I’ve seen him give away points in the past, and this time, he told on himself that he challenged a point, when he already won it and then would lose it. He’ll be a great dad.

With hi-def television, maybe these women should look into mustache removal.  Even Maria Sharapova was not exempt!

I love all the blue and pink outfits!  It looks like the wardrobe sponsors raided my wardrobe!

I love Mirjana Lubic-Baroni’s story, as everyone does.

Even though I was torn in her matches against Lubic-Baroni and Wozniaki, I’m a fan of Sara Errani.

Why does Genie Bouchard constabnly wear white kabuki make-up? I hope she doesn’t get any cosmetics sponsors!

I really appreciate that Caroline Wozniacki and Victoria Azarenka make the effort to wear eye make-up.  The sport needs some glamour.

The two funniest things I’ve ever seen in the sport were Caroline Wozniacki trying to hit the ball with her hair caught in her racket, and Roger Federer hitting his opponent by accident, and then joining in the laugh when he realized.

How gorgeous is former champion Goran Ivanisevic?!  The answer–very!!!

Caroline Wozniacki handled her victory over Maria Sharapova, and handshake, absolutely correctly.  She was thrilled, smiled and took it all in, but didn’t overdo it nor keep her opponent waiting at the net.  She put on a genuinely apologetic face for the handshake, and then let her happiness shine through. Good for her!  You go, girl!

Sunday night was the absolute first time I’ve ever seen Roger sweat.  And his shirt wasn’t even that wet, though everyone else was dripping.

But it’s hard to look at these guys sweat.  It actually makes me more than a little queasy, even, dare I say it, when it’s Roger.

I feel awful that Dick Enberg got so screwed by the rain. CBS brought him back to call Roger’s match on Sunday, but after just a few games, it poured, and then CBS went off the air! It was great to hear him call tennis again, though, even for just those few games.

The Tennis Channel people don’t shut up during the points!!!  How rude!  And they’re the actual channel of the sport!!! I definitely tweeted this one! At them!

I swear, within about a a half hour of my tweeting it, the Tennis Channel guys actually did stop talking a little!!!  Finally, I felt the power of Twitter!

I think the only person who wasn’t the least bit concerned when Fed was so far down in the first set, and then lost it, was Fed!!!

Martina Hingis got so great-looking!!!  Who would thunk it?

I think I really like Jelena Jankovic’s loose-fitting purple and blue dress.

Why would so many players choose to wear black clothing?!  Didn’t they know about the weather report, with the heat and humidity?

Stop asking Novak to dance! He doesn’t need the extra work-out, and he’s awful at it!

Victoria Azarenka is my favorite female player, for so many reasons.  She’s always so good on the court, nice, and grateful.  Last night, when being interviewed on-set, she said, “Sometimes you forget that life is beautiful; it’s as simple as that.  You’re blessed to do what u want.” “Sometimes, in the tough moments, you forget that [about being grateful,] but if you keep reminding yourself that there’s a new day and you can do something better, I think it’s great.”

I hate saying this, but Heidi Klum was an idiot last night. She was sitting in one of the players’ boxes during a tense match, and kept joking around, feeling guys’ chests and arms, lying on one of their shoulders, and generally fooling around while the player’s coaches and relatives were totally stressing. So very, very rude of her. She should be ashamed of herself. I’d tweet at her, but someone who’s that age should know how to act already, and shouldn’t need me to point-out her dreadful behavior.

MY US OPEN TWEETS

In case you missed them live, here are just a few of my tweets about the US Open, including the hashtags and “@”s because I’m too exhausted to remove them right now.

I’m telling you one out of order, for a reason. Last night, an ESPN commentator, Chris Fowler, said something on-air that he shouldn’t have, and I tweeted at him about it. Guess what? He actually answered me, apologizing for it, and saying he regretted it right away. Having done lots of live television myself, I felt his pain. And I give him tons of props for tweeting back at me to let me know he was very aware of his error. Very classy move.

If you want to see my upcoming tweets this week, please follow me @MajorCelebrity.

Now, here are my tweets from this first week of the US Open, with no further description:

Pervak’s outfit is the single worst-looking one I’ve ever seen! Maybe she’s trying to distract her opponents with it. The ugly outfit looks like her mother made it!

Why would #DanielleCollins wear a black dress in that NY heat?! And it looks sort-of plastic, too! Ugh.

Back to the #USOpen2014. Doesn’t it look like @JoWillyTsonga lost a lot of weight? He looks like a different guy to me.

I love @cicibellis99’s adorable blue & white outfit! If it looked as cute on me as it does on her, I would wear it every day! [Note: CiCi Bellis favorited it!!!]

I’m upset that #AggieRadwanska is out bc I loved her black, white, and yellow polka-dotted outfit! So cute.

Why is #HannahStorm allowed to cover #tennis? She just proudly called @stanwawrinka “Dan” instead of “Stan!” What an idiot she is!

If looks counted, (and they do with me!,) @ryanharrison92 would beat #Grigordimitrov every time.

Good to see #PamShriver finally caring about her looks! So, good for her!

Funniest thing I’ve seen in years: @CaroWozniacki trying to hit the ball with her hair stuck in her racquet! I needed that laugh.

Look how cute @ChrissieEvert looks with a #Ponytail!

Love @vika7 She expresses herself so well, much better than most of the Americans! You go, girl! Thrilled she’s back and winning.

Why would anyone in the world root for #geniebouchard? She’s not nice, full of herself, and overall nasty. What a supreme creep.

#USOpen I cannot even express how much I love @rogerfederer. And not like a crush; just as the loveliest, most talented person ever! Wow.

I love @DjokerNole’s honesty; he said he challenged a point he already won, even tho that made him lose it. He’ll be a great dad.

What a great win for @CaroWozniacki! I’m so happy for her. #rorymcilroy who?!