I think that just about everyone who knows me will be surprised that baseball is my favorite sport to watch, but it is. I think that’s because I can actually sort-of relax and enjoy the journey. With basketball, my second fave, you can’t avert your eyes for even one second. And with figure skating, which enters my heart in third place, I’m nervous for the skaters all the time, praying that each one won’t fall. (To be honest, I’m actually hoping that certain ones will!)

But baseball has it’s lulls during the action, which allows me to clean the house, (yes, I actually do do that awful chore!,) or exercise my mind by working on crossword puzzles, or check-out my emails. I would not attempt any of those during any other sport. 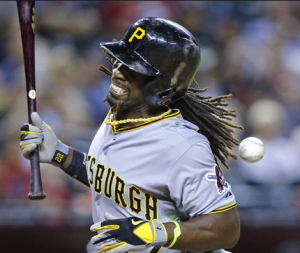 Andrew McCutchen getting drilled in the back by that pitch.

But the impetus for sharing my thoughts on this season of baseball right now is the evil Arizona Diamondbacks. I don’t watch them much, but the consensus seems to be that they’re always a bit dirty.

But their latest stunt has even my dander up. This is what happened last week-end, in a nutshell: On Friday night, Pittsburgh Pirate pitcher, Ernesto Frieri, accidentally hit the D-backs star player, Paul Goldschmidt, on the hand. There’s a stupid “unwritten rule” in baseball that says that a pitcher on the offended team has to hit a star player on the offending team the next go-round. Totally stupid, I know. It would be smarter for the first two guys to just go a few rounds in a ring. Why hurt someone else who was totally minding his own business?!

So, on Saturday night, near the end of their losing effort, the D-backs pitcher did something so heinous, I can’t believe he hasn’t been properly punished yet! (I would have suspended him for the rest of the year!) Randall Delgado purposefully threw a 95MPH fastball at Andrew McCutchen, the Pirates star, (and last year’s National League MVP,) hitting him hard smack right in the spine! How evil is that???

McCutchen stayed in the game, but the next day, when he swung the bat, he immediately grabbed his side. And now he’s been diagnosed with a bad rib fracture! The Pirates, being men, are downplaying that the two incidents are connected. But, as someone who’s had every back, rib, hand, and knee injury in the book, I can tell you that I have not a doubt that they are.

And there was nothing for the D-backs to “get back at” the Pirates for to begin with! It’s widely agreed that Frieri’s hitting of Goldschmidt’s hand was totally accidental. What is wrong with these people???

So, last I checked, there was no penalty action from the league, Andrew is really screwed and who knows when he’ll play again, (though the Pirates are hoping it will be in less than two weeks,) and that’s it. The baseball analysts are still all outraged, I’m absolutely sick over it (because I abhor rottenness, in any area of life,) and I can’t imagine that any true fan of the sport is neutral on the subject.

I have a feeling it will all just die down by next week, but I really don’t want it to. I want this to be a big deal for the heads of the sport because what Delgado did is extremely dangerous. The guy at the plate could get killed or crippled, or who knows what! If the pitcher had hit the batter in the head with a pitch like that, there’s really no telling what it could do. But it would be dreadful. A coach lost an eye last year, I think it was. And there are other stories like that. No sport is worth anything like that. You’re not defending your family from a home invader with a gun, or anything close. Someone needs to sit Delgado down and read him the riot act. He’s young (just twenty-four) so I think he’s getting the wrong guidance from his organization. Enough already.

So, let me finish-up with a few shallow topics, to bring the room up a little. Here’s the first: They should make it a rule in Major League Baseball that no players can have beards! So much of the men’s facial hair is downright disgusting. They should all be made to shave, if only so that I can eat during games! I seriously get queazy looking at most of the bearded ones. They’re just gross. 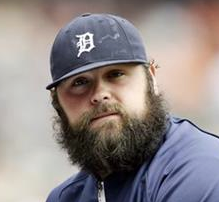 Joba Chamberlain and his nauseating beard. And dirty cap! Believe it or not, this is far from the worst picture I could find of him, but I didn’t want to foist the others on unsuspecting you!

They should also make a rule that the players’ caps and helmets have to at least begin the game clean. The filth on many of them is downright putrid. Ugh. And the Red Sox are the worst offenders. Don’t any of them want to attract normal females?

One of the worst I’ve seen, in both categories, is a guy who was one of my favorites when he came up as a Yankee in recent years. I swear, I absolutely did not recognize pitcher Joba Chamberlain, who’s now a Detroit Tiger. His beard is repulsive. Mr. X said he looks like Zach Galifianakis. (I’m proud to say that the Yankees do not allow facial hair. They may not even allow head hair, since so many of those dudes are bald…by choice!) [Note: Of course they allow head hair, by the way.]

But why do the Yankees fans hate Joba so much, all of a sudden? I was shocked to hear all the boos when the Tigers played the Yanks at Yankee stadium this week. The Yanks screwed Joba, not vice versa. And everyone was on the Joba bandwagon when he was a Yank, so I don’t get the dissing of him, at all. I still like him, although I can’t look at him without throwing-up in my mouth a little. 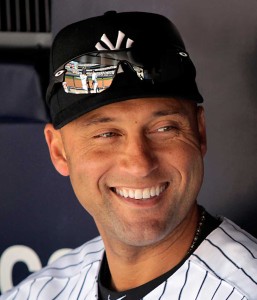 So let’s end this little diatribe in the opposite direction, on the highest of notes: Have I mentioned recently that I love Derek Jeter? I’m sure I have, but my affection for him is re-affirmed with every Yankees game that I’m blessed to see, win or lose. I’m sure I’ll write more down the line, about Derek’s last season, but I just always want to laud the guy. He’s a true gem, in every sense. And it’s been a joy to see that he’s always smiling this season. I always discover something new when I watch him, like that I just noticing that he runs like a little kid, when he’s coming off the field. It’s so cute. And, most importantly to me, of course, is that, at forty years of age, he’s still the guy who looks the best in his uniform. You go, boy!