So much juicy stuff has been going on in the world of sports recently. And I’ve been watching it all!

It’s waaaay too much for me to type-out, so I figured it’s time for one of my YouTube videos to discuss it all.  So here’s the link to it, hot off the presses!: www.youtube.com/watch?v=OXlnN5DiK9k. 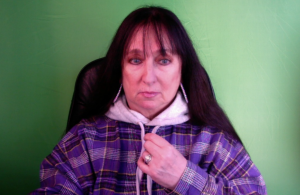 Karen Salkin deep in thought before beginnning her Sports Report on her YouTube channel.

My long-time former sports radio partner, and friend, whose newer radio projects I occasionally appear on, asked me to do a guest spot on a new show of his last week. He suggested I talk about baseball and Tom Brady, two topics I’m not especially into at the moment, other than to laud my two MLB teams, the Yanks and the Mets, for being #1 in their respective leagues right now. (You go, guys!)

So, I gave it a lot of thought, and came up with a few more interesting subjects than those. 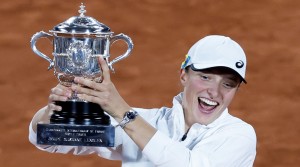 And that’s what I was going to talk about on my pal’s show. I had agreed to do the guest spot as a favor to him, and requested that he please just introduce me the correct way.  I wanted to make sure because when I did a guest turn on a different show for him a few months ago, he made it sound like I was a caller, rather the guest I was, he never once mentioned this e-zine, and he said something about my career, though while a wonderful reference, he had agreed beforehand to not mention. Ergo, a trifecta of betrayal!

I joked with him about it a short time later, so when last week’s guest spot was requested, I became Charlie Brown with Lucy and the football, and decided to trust him just one more time. Good grief!

So when I said he had to really do it right this time, he asked how I wanted to be introduced. Since I know he gets nervous, I wrote-out an exact sentence for him. One exact sentence! I wanted to make sure he mentioned this e-zine, the publicity of which is the only reason I do any show business endeavors gratis. That’s how everyone in the biz does things!!! He’s done radio shows for over three decades, so he definitely understands how it works. 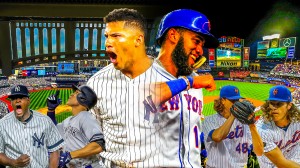 The Yanks and Mets–two sports topics near and dear to my heart!

Simple enough, right? But…he told me that he just wings his shows, (which every radio host does, by the way,) and he has only a few notes, so he can’t do that! I was in shock. He’s not able to read one sentence??? And introduce me as the guest I am, and not a friend who’s calling in??? And not mention that one thing in my very full resume, if that topic would even come up, which there would be no reason it would??? This stumped not only me, but Mr. X and everyone else I told about it, (to make sure that I was not the one who was being unreasonable.)

So, obviously, my spot on his show was no more. And then, with my topics now running through my head, (not to mention having make-up on yesterday from a brunch I had just attended that afternoon,) I figured it’s time to shoot a new video, and make it about the sports I’ve been obsessing over recently.

So, now, with all of you knowing that I, indeed, “helm the e-zine ItsNotAboutMe.TV,” (which is part of the sentence the radio host couldn’t guarantee he’d introduce me by,) here is the link to that video again:  www.youtube.com/watch?v=OXlnN5DiK9k. 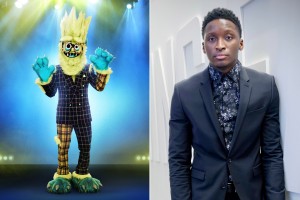 Victor Oladipo and Thingamajig on The Masked Singer? Are they one and the same?

I think you’ll find at least some of it interesting, even if you’re not a sports fan; you know I delve deeper into the topics than just the wins and losses. I share my thoughts on such matters as which player was on The Masked Singer, and how did he do? And who was the only person who guessed him right from Day 1? Here’s a clue to that answer—it’s the same person who “helms the e-zine ItsNotAboutMe.TV!”

I also unveil the top member of my “All Little Bitch Team.” Unless you’re on it, you don’t want to miss that one!

Okay, I’ve already said too much. Just watch the vid, please, and I hope you enjoy it! Here’s the link one more time: www.youtube.com/watch?v=OXlnN5DiK9k.