Trending
You are at:Home»ART»PARTY/SPORTS/ART: TAG HEUER AND AMGEN TOUR OF CALIFORNIA PARTNERSHIP PARTY
By Karen Salkin on May 2, 2017 · ART, PARTIES, SPORTS THOUGHTS

They may as well have billed this soiree “Two Things That Karen Loves” because it married attractive watches with a sports team!  Tag Heuer threw this celebration at Galerie Montaigne on Melrose to trumpet that they are sponsoring the upcoming bike race, the Amgen Tour of California. 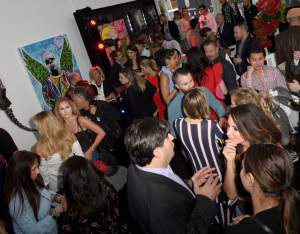 The buzzing crowd, featuring Karen Salkin, (down front, on the left, in the blue sweater,) and Michael Roth (in the front middle, with the fabulous thick hair!) Photo by Joshua Blanchard/Getty Images, as is the big one at the top of the page.

They also unveiled their new colorful jerseys, which were designed by a young artist named Alec Monopoly.  There were four models on stage during the official announcement, and Alec went along and sprayed-painted one letter from his first name on each shirt, coming up with A-L-E-C.  (I wonder if that’s why Tag Heuer chose him for the job—because he’s a tagger! I’m not even sure that I’m joking.)

In the actual race, these shirts will serve as the “Best Young Rider” jerseys, one of which is awarded at the end of each day to the—guess what?—best young rider!  (In this case, “young” translates to “under 25.”)  What a carrot to make you ride faster!  I can’t even ride a bike, but I’d try really hard, if I knew one of these artistic tops was my prize at the finish! 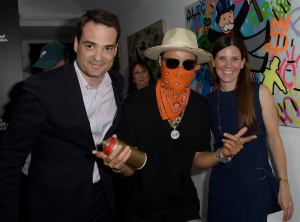 Kilian Muller, Alec Monopoly, and Kristin Klein. (With a special guest appearance by moi, in the background.) Photo by Joshua Blanchard/Getty Images.

Kilian Muller, (President of TAG Heuer North America,) welcomed the crowd, and then Kristin Klein, (so many “K”s—I love it!,) (who is both the President of Amgen Tour of California and Executive Vice President of AEG Sports,) explained the new partnership to the assemblage, (of which I was front and center—I wanted to get as close-up a look as possible at everyone’s timepieces—I’m a nut for good watches!)

After the brief speeches, the attractive crowd partied on either the back patio or inside the art gallery.  Or, as my friend and I, in both areas!  (And I’m happy to report that in the entire time I spent outside, there were only a handful of smokers!  Los Angeles has finally gotten hip to how disgusting that habit is.  Good for those revelers!) 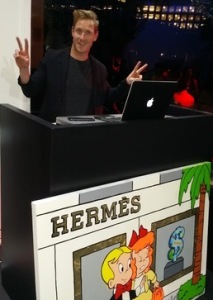 The DJ. Photo by Alice Farinas.

I’m sure you all know that my favorite component of the party was the delicious, creative hor d’oeuvres from Vucacious Catering.  The tiny tidbits were so unusual that I can’t even describe most of them for you, actually.  (I do know that one was a crispy potato cake topped with salmon, crème fraiche, and caviar.) And they kept them coming all night long!

Speaking of all night, the DJ was so good that no one seemed to be anxious to leave, even when the festivities had been over for awhile.  That’s the sign of a successful event!

The only thing that would have made it better is if we had each left with a mock-up of the feted jersey of our own, so I can make believe I’m an athlete myself! And a young one, at that!!!