LEBRON JAMES GOING BACK TO CLEVELAND!

Who knew?! Certainly not I! I had already laid-out all the reasons, to Mr. X, why LeBron James was absolutely, positively not going back to his first team, the Cleveland Cavaliers next season. And I’m rarely wrong about things like this. I even convinced Mr. X, who had been pretty sure that that’s what was going to happen.

He suggested I write about it. I didn’t want to clutter-up my column about the NBA Draft with all my “proof,” so I wrote just a few sentences declaring, “Despite what the buzz is in the sports world, I predict that LeBron James, who just became a free agent, will not go to Cleveland.  I can’t even believe that anybody thinks that he will!  (I’ll try to write a column backing up my theory in the near future.)” My bad. 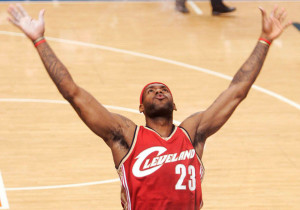 As much as I hate being wrong, I’m glad that I was, in this case. I used to love LeBron when he was a Cav, and rooted for his team even against my much loved San Antonio Spurs. (I know—ouch.) I watched as many of his games as I had access to, and marveled at his basketball skills. He was my new Michael Jordan, (whom I had long since turned against, as soon as I met him.)

I was crushed for the downtrodden city of Cleveland to have lost their supposed savior. And, even though Pat Riley had been a fan of my show, (and was very nice to me,) when he lived here, I was never a fan of the Miami Heat; neither the team nor the real heat that’s been disgusting every time I’ve visited that city. (And the rest of the state, too!)

I became a James hater, even though I had defended his right to change teams, (and had also even defended the goony way in which he announced his decision to take his “talents to South Beach.”) But, as a true Empath, I could not rise above feeling the betrayal that Cleveland inevitably felt.

A few weeks ago, I had started writing my column on why he definitely would not go back there next season, but tennis got in the way. I kept pushing the LeBron decision column down in the schedule, and figured that as soon as he signed with whichever team was not Cleveland, it would not be pertinent anymore, so I sort-of abandoned the whole article. [Note: But my proof, in a nutshell, was: the death threats against LeBron and his fam and associates when he left, the very public burning of his jerseys, the horrible letter the Cavs owner, Dan Gilbert, published on the team’s website, (and just took down a few days ago!,) and other stuff along those lines. Never mind.]

But then, here comes the announcement. I found-out right before I started writing this last Friday. I tweeted about my wrong-ness right away, (@MajorCelebrity,) and then surfed the web for the deets, beginning with the Sports Illustrated “essay” by LeBron, explaining it all, actually very simply. (I’m sure that “telling it” to an actual sportswriter helped quite a bit, though.)

This actually made me cry by the end: www.si.com/nba/2014/07/11/lebron-james-cleveland-cavaliers.

I took the week-end to see if there’s anything else I wanted to say on this topic, and one interesting thing presented itself. I noticed that Kareem Abdul-Jabbar wrote his own thoughtful essay, expressing doubt as to if anyone really can “go home again.” (You can read it here: time.com/2977353/lebron-james-cleveland-cavaliers.)

Kareem is the only person I had seen come out and say what I was thinking when the Donald Sterling recordings surfaced, with Donald ranting against black people. As horrible as what he was yelling at his girlfriend was, Kareem asked in print why no one seemed to be outraged that a private conversation could be recorded and outed to the public! Those were my thoughts exactly! Even though I have met Kareem a few times in the past, I hadn’t realized just what a clear-thinking, intelligent, thoughtful, well-spoken (and written) person he is! So, that’s another positive to come out of the new LeBron situation for me.

There’s nothing much for me to add, except that I wish the city, and LeBron, much happiness. It will take awhile for me to root for the Cleveland Cavaliers again, but it just may happen. Like a spurned lover who’s considering taking back his or her flat-leaving love, we’ll just have to wait and see.