I’ve been too busy watching sports to write about them! But now that so many big events have just wrapped-up, with the United Sates’ amazing World Cup victory over Ghana yesterday, and Wimbledon and the Baseball All-Star game fast approaching, I decided to weigh-in on the recent competitions, most notably, for me, the Spurs winning the NBA Championship…for the fifth time!!! [Note: I wanted to wait until the Kings parade was over to publish this, out of respect for all my Angeleno readers, who were totally distracted yesterday.] [And before the one for the Spurs tomorrow, which I’ll be glued to!] 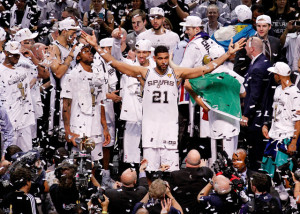 I could not have been happier with how this NBA season wrapped-up! Those five finals games could not have been scripted better! And lest you think that I’m just hopping on the San Antonio Spurs’ bandwagon now, Mr. X can attest that I’ve been rooting for them since before their first title, back in 1999!

Unlike some others I know, I was rooting for the Spurs and not against the Miami Heat, though I’m definitely not fans of theirs. But the people who are making fun of the Heat are wrong; they’re still a great team, they just got beaten by a better one, one with heart, which is something the Heat are lacking. LeBron James is still the best player in the league, (and possibly ever,) but he needed his teammates to come up to his level. To me, it was like watching him with his former team, the hapless Cleveland Cavaliers, all over again. I have a distinct image of the great Michael Jordan walking off the court after losing yet another eastern Conference Championship to their big rivals, the Detroit Pistons. He answered what some interview threw at him by saying, “I can’t do it alone.” I feel like that’s what LeBron was thinking on Sunday night.

I kept telling Mr. X that Kawhi Leonard deserves that MVP trophy because without him, the Spurs probably would not have won the last three games. Mr. X thought it was going to go to Manu Ginobili, but I stuck to my guns, and the reaction of all the players when Kawhi’s name was announced confirmed that they all agreed with me.

Since everyone kept referencing LeBron James crying after the two losses on their home court in Miami, I was shocked that I never saw a sign in the Astrodome last night saying, “Kawhi me a river.” You see? The Spurs need me!

One interesting note is the international make-up of the Spurs team; nine of their players are from other countries! That fact seriously boggles my mind.

Anyway, a major congrats to the Spurs on an absolutely exciting 2014 play-offs. I loved (almost) every second of them!

[Sidebar: I was impressed by a quick little sentence that commentator Jalen Rose uttered during yesterday’s Father’s Day telecast. It was so simple but to the point that I even tweeted it right away, which is something I rarely do. This is what he said: “Everybody’s situation is different, but if you have the chance, make it right with your dad today.” I have a feeling that it may have resonated with a lot of people watching the game. So, props to Jalen for putting it out there.] 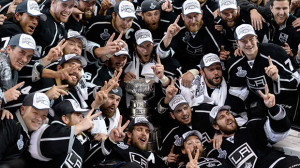 I’m thrilled for all the Kings fans here in Los Angeles. (And for my friend, Noelle, in Montréal, who’s the biggest Kings fan I’ve ever encountered!) This was a hard one for me since I’m also a New York Rangers fan. (But the Rangers never put my name on their big center scoreboard, welcoming me to a game, as the Kings did for me back in my heyday. And before theirs! So, I’m a bit more partial to this west coast team.) No matter how it was going to turn out, it was a win-lose for me because I’d be happy for one team and sad for the other.

But I don’t know how fans can watch that much hockey; I was seriously dizzy and nauseous, and having trouble focusing my eyes, after watching just parts of some of the games! And even though I’ve always loved athletes, in general, I could never have a hockey player as a boyfriend because, besides that half of them are missing teeth, I just think they’d be too intense off the ice, as well.

But no matter what, I’m happy to add my congratulations on this amazing play-offs for them!

I really enjoyed the first two legs of the Triple Crown this year, and was so disappointed when California Chrome failed to complete this uber-rare accomplishment by not winning the Belmont Stakes.

And I do agree with California Chrome’s owner’s thoughts on that no new horses should be allowed to race in the third leg. But I don’t agree with the way in which he said it, nor his timing of lashing-out when his horse lost that final race. I realize that the entrance procedure can never be changed, because then the results couldn’t be comparable to the others in history, so there’s really nothing that can be done about it. But I really have no problem with the content of his thoughts on the subject.

I don’t have much say about this recent tennis tournament, except that I’m absolutely sick to my stomach that Raphael Nadal won another one, (because I don’t want him getting so close to Roger Federer’s singles titles record,) and I’m happy that both Williams sisters got eliminated in the second round. And now I have to agonize about all the results at Wimbledon which begins in less than a week! More stressful times for me ahead.

Yes, he is disgusting, on so many levels. But no matter what, I still don’t feel that people’s private conversations should be a) recorded, b) released to the public, and c) have their livelihood taken away because of said comments. I’ll be weighing-in on this whole topic in the next week or two, but just think about this: is there any one of us who would be happy if their private conversations were released? It doesn’t matter if the topic is race, religion, friends, or enemies; what’s said in private should remain in private. (Maybe he should have just said those comments in Vegas!) That’s all I have to say on the topic for now.

That’s my brief sports thoughts for now. I have to get back to watching a baseball game now.