I swear—this is my last tennis column (for a little while,) but this tennis chick deserves her own column, so she’s getting it. But not for the reasons you may think. Read on.

I hate to give this girl even more publicity than she’s already getting, (undeservedly so,) negative though it may be, but tennis fans need to know that just because the advertisers are trying to shove Eugenie Bouchard down our throats, as the new “sweetheart” of tennis, she’s far from that.

Just as perennial bad sport Serena Williams is getting older, and losing more matches, (which means we soon may not have to put up with her tennis court shenanigans any more,) and I was beginning to relax and be able to enjoy the women’s game, along comes a new player for me to root against.

First let me tell you a little parable about something that happened to me in real life. Before Mr. X, I had a boyfriend I’ll call “O.” After we broke-up, as time went by, he became more of a very close brother to me, and that’s how I thought of him, rather than as an ex-beau. After a while, he started dating an adorable girl I’ll call “L,” and the two of us couples became very close, and enjoyed spending time together. It was perfect. Then O and L broke-up, and after another while, O started dating a girl I’ll call “C.” Though I hadn’t met her yet, I felt that it was getting serious, and this could be “the one.” So when he asked me to meet them for lunch so I could meet C, I was so excited that O would finally be happy. But as I walked back to my car, post-luncheon, I had this horrible sinking feeling, realizing that I just did not like C at all. And the years have proven to everyone that I was correct about her. 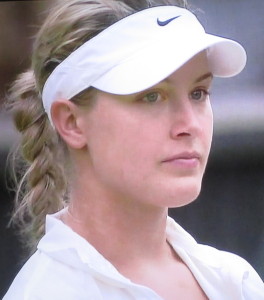 That’s the feeling that crept-up on me regarding Canadian tennis player Eugenie Bouchard. I always sit-out the Australian and French opens, because watching every second of them, as I do with Wimbledon and the U.S. Open, would take away another month of my year. So I knew nothing about this twenty-year-old from Montréal before June.

But when Wimbledon started last month, and I heard that she was a real contender, (because she had made the semi-finals of the previous two grand slam tournaments this year,) I was really excited. I started rooting for her, sight unseen, because I just wanted there to be someone who could potentially beat Serena Williams. And that’s basically how the ESPN commentators were hyping this girl, too.

But, as the fortnight wore on, that same feeling I told you about two paragraphs above came over me. At first, I thought, “What a pretty girl!” I’m ashamed to admit it but, the same as most people in the world, it appears, I am a tad swayed by good looks. So, I was rooting for Eugenie to become like Maria Sharapova was when she was young. Maria’s tennis-playing led to her fame which led to tons of product endorsements (because she was a tall, pretty, blonde,) which led to more fame, and it all translated into millions upon millions of dollars for Maria. I could see right away that this was what the powers-that-be were going to try to do with Genie.

But after watching her closely for the past two weeks, here are my assessments of her:

She reminds me of two things from movies, and pretty, likable stars they are not! The first is a Stepford Wife. She looks good, but has absolutely no emotion whatsoever. Eugenie barely even smiles! She always looks miserable, even after a big win, like she had in the semi-final. She doesn’t even pump her fists! I’ve never seen anything like it, except in sociopaths.

The other person she reminds me of is the lead character in the old film, Leave Her To Heaven. Gene Tierney, who is absolutely gorgeous, (and my favorite old female movie star,) plays this character. But it’s definitely not their looks that are similar; it’s the character herself. Gene plays Ellen, who’s a cool character who fools everyone. In reality, she’s just into herself, and is even capable of murder to get what she wants. I’m not saying that Eugenie is capable of anything as heinous is that, of course, but her demeanor is the same as Ellen’s. Chilling.

And Genie admits that she has no friends on tour! Why a twenty-year-old girl doesn’t want to befriend another female, I just can’t understand. She should do so if only so that when she’s traveling the world, she won’t feel alone! It’s just not normal to not have friends on the tour at that age.

From what I’ve read and heard, she did have one good friend just a little while ago; England’s Laura Robson and Eugenie studied at the same tennis academy in Florida, and it appears that they used to be inseparable. But, as Eugenie got further into tournaments, it seems she dropped Laura from her life. In interviews, I’ve heard Genie say that the tour is not the place for friends. Yeah, right. Try telling that to adorable and gracious Kim Clijsters, upbeat and funny Victoria Azarenka, or any of the Italian or Czech girls! Everyone should want to have another female they can confide in, in any walk of life. But to be a very young girl, circling the globe, it’s just not natural.

Here’s another weird thing about her: try contrasting her reaction at being runner-up in her first Grand Slam final with those of Dominika Cibulkova in the same position at the Australian Open, and Simona Halep at the French Open. All three of those young girls were in their first Grand Slam final this year, and the other two were downright joyous. You couldn’t wipe the smiles off their faces at the end if you wanted to, yet Eugenie Bouchard just looked miserable during the trophy presentations at Wimbledon. Not good sportsmanship, either.

That’s all my new thoughts on her today, (though I’m bound to have more during the US Open, unless she just disappears from our radar by then, knock on wood,) but if you missed yesterday’s Wimbledon Wrap-up, here’s some of what I had to say about Genie then:

To ESPN: Enough with Eugenie already!!! No one likes her, or cares about her! You guys are trying desperately to make someone other than Serena and Maria Sharapova famous. You all think that that will help tennis, in general, but players have to earn the respect and accolades. She’s done no more than Vika Azarenka and a few others, but you guys just want to promote someone. Young guys, and even some girls, may care, but the rest of us care only about great play, kind players, and some drama, not a piece of attractive vanilla fluff.

They’re just trying to get people to watch, no matter how. And advertisers are thrilled to get a younger Maria Sharapova, looks-wise. That’s what made Maria famous, not anything else. Even when she was sucking on the court, she was selling products.

When Eugenie had the worst loss ever seen in Wimbledon history in the Final, Mr. X said of her, “She thought she was better than she is.”

I’m thrilled for Petra Kvitova to have a) won the Championship, and b) beaten the Bouchard girl. Genie was a bad sport, which should have been a surprise to no one.

The analysts all predicted Genie to win. Then they said that she didn’t lose it, but rather Petra didn’t give her a chance to win. Exactly…she lost!

Even Andy Murray had more emotion when he lost his first final! And he’s practically flat-lining all the time.

Petra, on the other hand, was gracious and humble. And somehow, she got better-looking after she won! I never saw so many people want to double-kiss a female. They all seemed to love her!

Genie called her “my opponent,” rather than “Petra.” Bi-atch.

I’ve never trusted girls who don’t have friends. And Eugenie makes a point of telling us that she purposely has no friends on tour!

Maria Sharapova at least giggled as a young girl, which this one is missing.

She also needs to stop adding esses to the ends of words that end in “t”s and “d”s, such as “and.”

If she wasn’t nice-looking, they would never have shown almost her entire post-final press conference.

Now, let’s hope she either mensches-up, (which I seriously don’t see happening anytime soon,) or goes on a big losing streak, so we don’t have to keep having this hype shoved down our throats.