I hope you read my little tribute to Derek Jeter last week. I had been working on it earlier in the year, but decided to wait to finish the column until the end of the season. Little did I know how magical that ending would be! (You can read it here, if you missed it: itsnotaboutme.tv/news/sports-thoughts-derek-jeter.)

But now there’s so much new information, on his post-baseball-playing career, that I just had to do some quick updates on him. 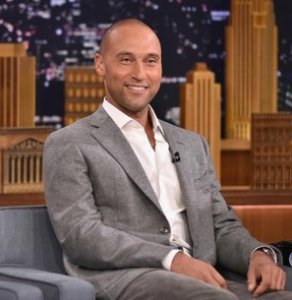 I love Derek Jeter’s new endeavors! Not only did he start a website for athletes to communicate directly with their fans, but he’s also now a book publisher! And the first two works are books he wrote!

I am a tad disappointed in him, though, because he told the reporter who interviewed him on the field, after his last game, that his post-retirement plan “is no plan.” That’s the first instance I’ve known of him fudging the truth; he’s had to be working on these projects all along! I can’t figure out a reason for that non-truth. Perhaps he didn’t want to muddy his on-field career with talking about what’s next, but he should at least have said something like, “Stay tuned.” (But that little white fib did not deter me from dreaming that he proposed to me, right after his recent appearance on The Tonight Show!*) [Note: On that show, Jimmy Fallon did all the talking! He basically just recapped to Derek what Derek had done in that last home game! I like Jimmy, but let the guest speak, for goodness sake! Especially if it’s a just-retired Derek Jeter!]

I was telling Mr. X about tDerek’s new situation, and it sounded somewhat familiar. At first, I couldn’t put my finger on it, and then I realized from whence it came–it was like one of my favorite scenes from perhaps my all-time favorite movie, Gidget Goes Hawaiian! For those of you not as well-versed in this fabulous film as I am, here are the scoops: On vacation is Hawaii with their families, Gidget tells Abby, her arch-rival at the resort, that she’s too depressed over the break-up with her steady, Moondoggie, to even leave her room for the duration of the trip. So, Abby’s thrilled that she has all the cute young guys they met on the plane to herself. All of a sudden, Gidget decides to join them in the nightclub that night, and does a perfect dance with the professional dancer guy. Abby is, of course, livid. When she goes to see Gidget the next day, Abby tells her that she’s full of surprises, and asks her if there is anything else she can do. Gidget answers, “Not a thing!!!” We immediately cut to a scene of her surfing like a pro!

So that’s kind-of what I feel that Derek did; he told us that he had absolutely no plans for his life after his last game, and within three days, he had published two books and put up a professional website! He totally Gidget Goes Hawaiian-ed us!

But I’m absolutely thrilled for him! And for all the people who can benefit from reading his books, and talking to the pro athletes he put together for us. Derek Jeter continues to be a everything a man should be. You go, boy!

P. S. Despite stupid, speculative reports to the contrary, I knew he wasn’t getting married on Sunday, as every website had incorrectly predicted! After such a controlled, disciplined existence for his entire forty years of life, I didn’t think there was any chance that he would rush into something as big as marriage the second he had some freedom from all that restraint. I’m not saying that he’ll never marry his current girlfriend; I’m just saying that it wasn’t going to be the week-end after he retired from baseball.

And did you notice that, after whipping everyone into a frenzy about it, the rumors perpetrated by the press just faded away on Sunday? Derek was probably just having a retirement party. Jeez–give the guy a break!

*(In case you’re interested in what happened when Derek proposed to me in my dream, I woke-up before I answered him! So, I guess we’ll never know what my answer would have been. Yeah, right.)