I’m thrilled to be able to begin my next thousand columns with one about Derek Jeter. What a way to start!

Nothing that I write about Derek Jeter can even begin to capture the glory of this man. But he deserves every tribute that he gets, big or small, so I have to at least add my two cents.

For my readers who still think that the only people who care about Derek Jeter are sports fans, get a load of this: In March, he was #11 on Fortune Magazine’s Fifty Greatest Leaders list!  He was just two behind the Dalai Lama, for goodness sake!!!  (In case you’re curious, the Pope was first.) 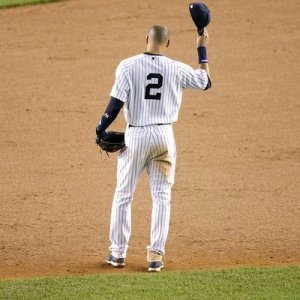 Even my sports-challenged pals (like the one who once asked me, word for word, I swear, “What’s this Super-bowl you’re always talking about?,”) know who Derek Jeter is!  And it’s not even from the gossip pages, since he’s never on them!

On the national broadcast of Derek’s last game on Sunday, baseball announcer Ron Darling said that DJ was handsome, which I keep forgetting about.  I’ve always said he has the best body in baseball, and has for the entire twenty years!!!  And I also always forget to put him on my list of crushes, which is strange, for me.  I do have a small one on him, but it’s so much more than that.  I love, respect, admire, and revere him.  I wouldn’t even want to be his girlfriend because it would never be an equal relationship for me; he’s the pinnacle in sports. And men! (But Mr. X is still better, especially in the humor category. And in the putting-up-with-me one!)

But Derek Jeter transcends sports; he’s actually what every human should be–lovely, kind, conscientious, not full-of-himself, (although he has every right to be,) respectful, loving of his family, fun, intelligent, hard-working, disciplined, a great friend, and supportive teammate–shall I go on?

He’s always been one to provide thrills for Yankee fans, and his final home game of his career gave us more of the same. I had never seen him like that before. He was twitching, breathing out, and squeezing between his eyes to keep from crying. We can all sympathize, but none but a tiny few of past greats can empathize with the emotions he was feeling his last time on the field at Yankee Stadium.

How did he not cry, though?! I sobbed, loudly!, through the entire game. (Heck, I did that through the whole season!) I could not bear for his career to end. I don’t know how he kept it together. What a guy!

And then, just when we thought the game was all over, and Yanks manager Joe Girardi was going to take him out of the game with two outs in the top of the ninth inning, to what would most likely be the most intense ovation any of us has ever heard, the other team tied the game up. Against one of the most successful closing pitchers this season. So, the Yanks had to play the bottom of the inning, and someone had to get on base for Derek to come up to bat again. And that’s exactly what happened. (I’m explaining this for the few people who aren’t already aware of the drama, by the way.)

And just like that, Derek Jeter hit a walk-off base hit to win the game! His very last one in pinstripes! (And he celebrated like he was a little kid, who had just won his very first game!) OMG! Field of Dreams has nothing on this guys! If this scenario was written in a script, it would have been dismissed as hokey and not believable.

But, we all saw it with our own eyes. And I predict that it’s going to be one of those events where everyone will remember where they were when it happened. Mark my words.

I just hope that there are no Hall of Fame voters who are idiotic, or contrarian, enough to not vote him in on the first ballot. He deserves to be the first unanimous electee in the history of the Hall.

On a personal note, I have two infinitesimal connections to him right now.  The first is in the “ending the major part of our New York lives” category; both of us just ended our tenures there this summer.  His is obvious, and mine is what I’ve written about a bit previously–my childhood home is no longer in my life.  So, we’re both done with half-living in New York, at the same time.  I’m as sick over him retiring from his regular life there as I am about my own situation, which, trust me, I’m pretty busted-up about.  Although, for both of us, I guess we feel relief that it’s finally over because waiting for the end, on both counts, has been uber-stressful. He’s spent twenty years there, and I spent more than twice that.  But I feel it was equally productive, and informed our presents and futures.

The second tiny thing we have in common now is that this week is a new beginning for both of us—me with my new site design, (which is still a bit of a work in progress at this point, so don’t judge quite yet,) and Derek with the rest of his post-playing life.

On that endeavor, I wish him the best of luck, and all the happiness and success, and rest!, in the world. Few people are as deserving of all of those as he.