OMG!  I love this year’s NCAA March Madness college basketball tournament so much!  My only problem for next week-end is that, although my two favorite teams (outside of UCLA, that is,) are still in it, they have to play each other in next week-end’s Final Four!  The good thing of that is that at least I know one of them will be in the finals.  The bad part is that one of them won’t make it. 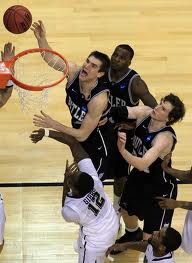 The intensity of the Butler Bulldogs, in the dark jerseys.

Those teams are VCU (Virginia Commonwealth University) and Butler.  As amazing as VCU’s journey is, I think I have to root for Butler because they were last year’s runner-ups and if the final second shot of Gordon Heywood, who now plays for the Utah Jazz, had gone in, they would have been the champions over Duke.  So, I’d love for them to win the whole thing this year.  And senior Matt Howard is such is man.

I love both young coaches, too.  Butler’s Brad Stevens, who looks like he’s in high school is thirty-fur and everyone’s new favorite coach, the animated Shaka Smart of VCU, in only thirty-three!!!  Pretty impressive “young fellas,” as enthusiastic play-by-play guy Gus Johnson would call them. 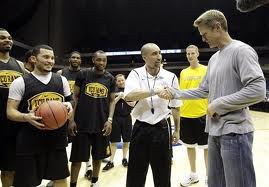 Another interesting thing is that if VCU wins, they’ll be the first champions who had to win seven games in the tournament’s history.  This year, the NCAA implemented a First Four, allowing extra teams to compete, which I think is great, but no expected any of them to make it this far.  VCU was one of those teams, hence they’ve already won five games to the everyone else’s four.  Interesting stuff for the record books.

UConn and Kentucky round out the Final Four, and at the end, which is next Monday night, I’ll be feeling awful for someone.  Even the teams I root against, I feel bad for.  But I can’t look away.  The whole thing is just so great, and, even for the guys who lose at any point, this tournament is an experience for them to cherish for the rest of their lives.

The last thing I have to say on the subject of college hoops is that possibly even more entertaining than some of the games themselves is the commentary of Sir Charles Barkley, 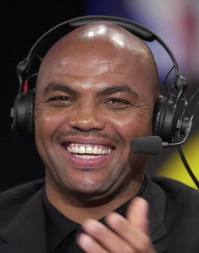 who had me rolling in the aisles on Sunday. (It’s just way too long to explain here, but for those of you who saw it, it was when they were interviewing UConn’s Kemba Walker, and Charles was making fun of Kenny Smith’s always asking the same questions that he had just asked, and it involved the word “:switch.“  Hilarious stuff.)

I rarely, but occasionally, scroll through the games if I get very behind, but never the halftime report because of Charles.  He makes everyone, fellow commentators and the audience alike, enjoy themselves.  He’s who I always wanted to do a talk show with.  Back in the day, a production team was trying to put me together with David Emmanuel, the man who designed Princess Di’s wedding dress!!!  While he was a lovely person, the royal wedding was such old news, and, while we all know that I can always talk with anyone at anytime, this was just a strange combo.  I’d tell them that they should pair me with Charles, (who wasn’t doing TV at the time, but I always loved his outspokenness while being interviewed himself,) and we’d have a hit, but no one listened to me.  I bet that now they regret it.  I know I certainly do.

While I’m on the topic of commentators, I have to commend Reggie Miller.  I used to hate him when with a passion he was an Indiana Pacer, but now I love listening to him.  He’s an excellent color guy, especially because of his loud and clear voice, with good diction.  I can understand about 95% of what he says, which is far from the norm.  Especially in the case of poor Marv Albert, who I believe is having difficulties with his voice.  I feel terrible for him, but I think they have to hire someone in his place until Marv’s very muffled voice heals.  Nowadays, he talks like Michael Bolton sings.

As you can tell, college hoops have been my main focus this month.  But I also got to see a couple of pre-season games of my beloved Yanks and Mets, which was very enlightening.  In the case of the Yankees, I’m a tad sad to see so many strangers wearing the revered pin stripes, but I’m willing to give them a chance.  I have to keep reminding myself that just a few seasons ago, Mark Texeira and Nick swisher were strangers too! 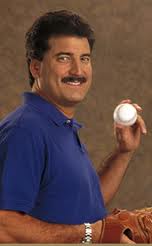 But I have to report that Keith Hernandez, the former Met who’s their color commentator on the New York channel WPIX, was even more disgusting than usual this past week-end.  Besides that he was reading the paper while his team was playing(!), which he readily admitted, thinking that makes him look above it all, he showed-up with a cold so bad that he was worried he might be getting pneumonia!  For the fifth time!  So he foisted it on everyone else there!  Including eighty-eight-year-old guest announcer Ralph Kiner!

All Keith was thinking about was himself, (as usual,) and how he was hoping he didn’t get sicker.  How about being considerate enough to not get anyone else sick!  I’m horrified at this behavior.  And his bosses are just as bad because they should have made him stay home or sent him home when he showed-up.  His disinterested insights are not necessary or warm and inviting anyway.  You know how I’ve pointed out that many American Idol contestants aren’t selling the song–they’re trying to sell themselves?  That’s what Keith does with baseball.

I actually have to force myself to tell this story, and it’s not even to really support what I just said about him, but it may give you a little insight into Keith, and it’s on-topic and sort-of fun, so here it is.

About seven summers ago, my mother and I were leaving our cabin in Aspen for early dinner when I saw a man walking in the patch of grass on the side of the property.  I could not believe my eyes!  Here was former Met Keith Hernandez!  It was so strange.  I was sure I was correct, but I asked my mother, “Isn’t that Keith Hernandez?”  She seemed very unconcerned, which was also a surprise because she and my father had been long-time fans.  So, off we went.

But I couldn’t let it go because I was sure I was right.  So, during dinner, I called my friend at the front desk of the lodge and she confirmed that it was indeed Keith Hernandez who had checked-in.  [Sidebar: When I told my mother that it was Keith Hernandez next to our cabin, she exclaimed, “Keith Hernandez?  I thought you said ‘Hernandez,” so I thought you meant the gardener and I was wondering why you were so excited to see him!”]

So, when I got back to the cabin, I left a brief message for him telling him that if he needed to know where to go in Aspen, I would be happy to fill him in.  (I was sort-of the town Cruise Director.)  Goony of me, I know, but Aspen is very easy like that, and I assumed he was stranger in a strange land.  But when I hung-up, I called Mr. X back home and embarrassedly told him what I had just done.  He couldn’t believe it!  He asked, “If you bumped into him in L.A., would you even say hi?”  I answered, “Of course not!  If I walked out of our house and Keith was right in front of it, I wouldn’t even say hi then!”  To which he inquired, “So, you go to Aspen and turn into a yokel?”

Just as we were laughing about it, guess who called me?  You got it.  Keith said to please come over to his cabin and tell him what I know about the town.  Never remembering how disgusting guys can be, I walked the few steps over, and he spent the whole time lying on the bed!!!  And I thought I was the goon!

I couldn’t get out of there fast enough!  And the next couple of days, my mother said he came to our cabin looking for me.  Ew.  I avoided him until I knew it was his last night, and then I felt bad, so I left him a message that my friends and I were heading over to the private club for the night, and I’d leave his name at the door.  As we girls were dancing and having a great time, while making fun of the trampy blonde who was dancing next to me, I heard the guy who was grinding on her call out my name.  Again, you guessed it.  We girls were hysterical.  The whole week ruined a Mets hero for me.  Oh well.  At least he didn’t have a cold to foist on me, so it was a good week.