The 2010 NBA Play-offs have just begun, but I must register my affection for LeBron James, right off the bat. Yes, to everyone who’s been asking, last year I was very disappointed with his walk-off-the-court-without-shaking-hands behavior. But he’s young, and so wonderful in so many other ways, that I forgave him. And to remind the population, I usually forgive but NEVER forget! (That should have a bunch of you shaking in your boots.) 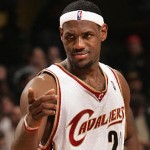 I’ve never met LeBron, or even seen him in person, so all these observations are based on what I’ve perceived of him on TV. I never believe what I read because I’ve been misquoted so many times, and had many falsities written about me, so all I can go on is what I’ve witnessed with my own eyes, and heard him utter with my own ears.

He always appears to be lovely and honest, and actually speaks better than most NBA-ers. When he’s being interviewed on the court, he always cocks his ear to really listen to the questions, which I can’t even tell you how much I admire. And he rarely gives pat answers. He actually answers the question! That’s practically a miracle for an athlete.

And best of all in those situations, he always says the interviewer’s name, which must be special to them (I know it would be to me!,) and pats his or her shoulder at the end, and always says, “Okay, thanks.” Very admirable in the world of sports.

There’s so much good about his game that my eyes can’t pick-up every little nuance, though I am guilty of re-playing some of his moves dozens of times, and even keeping some for posterity. So, I was truly amazed when the sportscasters the other day told us to watch how LeBron follows the ball from the rebound on the opponents’ part to when they try to lay it up, and how his block is so right there. My mouth was hanging open. They even explained it mathematically (they had to bring in an expert for that, as you can well imagine most of the announcers wouldn’t have those numbers in their heads) and it proved truly amazing.

When asked about it in an interview, and how he can achieve those spectacular blocks over and over again, he explained his heroics with one simple word: “Anticipation.” I love that boy! He knows he’s the best in the league, by far, and so doesn’t act like it. From wanting to play only in his hometown (so far) to employing his high school posse to run his humongous empire to being the league’s best player, LeBron James is the kind-of athlete that any city, family member, friend, or fan can be proud of. I know that I am. You go, boy! (And your Cleveland Cavaliers, too.)