The 2014 Winter Olympics are finally over, (whew!,) and I need a day to collect my final thoughts on them. But I must weigh-in on the Ladies Figure Skating controversy on its own, partially because I want credit for something I really did notice before anyone, in my detective work.

I should have tweeted it right away, but my twitter was down at the time, (we were overhauling it,) and besides, I didn’t want any trouble with Russians. 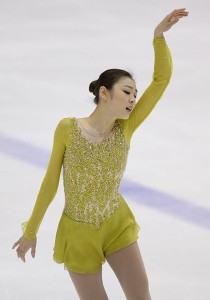 Let me first state that I really don’t know who really did deserve the win—Korea’s Yuna Kim or Russia’s Adelina Sotnikova. The latter did one more triple, which fairly gave her a higher technical score, but Yuna’s “component” score, which is for artistry, should have been much higher than it was, (because she’s by far the best skater ever,) and brought her way up to the top.  As NBC commentator (and my cuz-in-law,) Sandra Bezic stated about Yuna, “The level of performance was head and shoulders above anyone else.” She seemed to think that Yuna won, and explained that, as a choreographer, she looks for all the little things, and that no one else in the competition can compare to Yuna. I agree that Yuna was way under-marked in those scores.

On the other hand, as much as I am always more in favor of balletic style, such as Yuna’s superior one, Adelina skated with such power, joy, and abandon, that perhaps she really did deserve the win. Scott Hamilton, whose opinions I rarely respect, pointed something out that did give me pause this time. He said that since the Olympics are an athletic competition, the fact that Adelina had a more difficult program, that she executed almost to perfection, made the result a fair one. 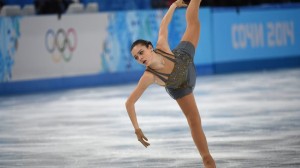 And I’m adding that she did have the performance of the night, aided more than in part by skating it in Russia, before an uber-enthusiastic home crowd. So, for me, it’s a toss-up. But I did lean a bit more towards Yuna, having been a ballet dancer myself, and never even close to being an athlete!

All that being said, this is where the controversy, and my detective work, come in. When Adelina first got the news that she won, she ran backstage and hugged her whole camp.  Some others got in on the celebration, including the always-classy and kind bronze medalist, Carolina Kostner.  But I noticed a woman coming from a different door to bear-hug the teen-age winner.  The woman looked sort-of like Meryl Streep as Margaret Thatcher, and I didn’t know why I took special notice of the encounter, but as I said, I’m always in detective-mode. I even asked Mr. X who he thought she was. 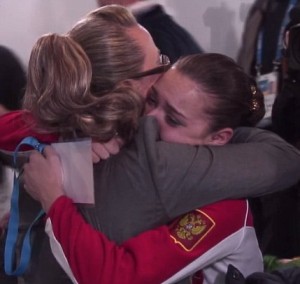 When I re-watched the whole competition on the prime-time coverage, (I watched it all live, in the L.A. morning,) the woman caught my eye again–but this time she was a judge!!!  Of that very competition!  That was outrageous!

I immediately made Mr. X see it, because I couldn’t believe my eyes.  I said that someone as close to a top competitor as this woman obviously was to Adelina had no right judging that very competition!

Since I never heard another word about it, (and trust me, not a second of the entire Olympics coverage eluded me,) I assumed there were good, or at least fair, circumstances I was not aware of, so I let it go, wishing all the time that at least one other person would mention it.  I felt like I was in one of those movies, like The 39 Steps, where I’m the only one who sees the evil, and no one will believe me.

And now comes news that it’s a big stink. 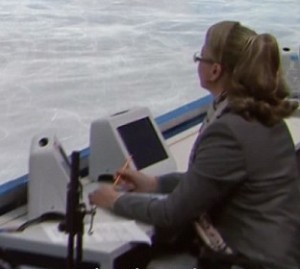 It turns-out that the woman in question, Alla Shekhovtsova, is not only a Russian skating judge who was judging that particular competition, but she’s also the wife of the General Director of the Russian Figure Skating Federation, Valentin Piseev.  It just doesn’t seem right.

So, here’s my take on it. Even though the judging system received a complete overhaul about a decade ago, after the potential for “fixes” were discovered in the old one, it’s still a tad shrouded in mystery. I don’t know every detail of it, but the judges scores are now anonymous, which is even worse than before. (I’m pretty sure that the way it works is that there’s a big panel of judges who put their scores in, and then the computer takes a few of those scores to count, and no one knows whose they are.) The part of the new system that’s more fair than in the past is the awarding of points for every little thing in a skater’s program now. It’s pretty complicated, but there are technical “callers,” who even use replay to decide what exactly was performed. Most of that makes things better for the skaters, but since judges can still award “grades of execution” as they see fit, and not have to answer for them, that’s where a judge for a certain country can really throw a monkey wrench into the works.

So, if this Russian judge’s scores counted, she could have single-handedly made her pal, Adelina, beat Yuna. No one has answered the questions about if they can figure out if her scores were among the chosen, and just what they were for both girls.

But, my final word on the topic is that someone who’s so obviously palsy-walsy with one of the competitors should not be on the panel in the first place! I’m sure nobody’s going to even look into the situation, although I’m sure the Koreans are trying to make it happen; the ISU (the governing body of International Figure Skating) is probably just hoping the controversy will go away real soon. I’ll tweet (@MajorCelebrity) if there are any developments in this story.

But I wouldn’t count on any Russians winning anything major (that’s judged) in the next Winter Olympics go-round that will be held in—you guessed it–South Korea!