Being the sports nut that I am, I was thrilled to be invited to this “Sports Summit” put on by Sports 1 Marketing, a company that was co-founded by former NFL quarterback, (and 1978 Rose Bowl MVP,) Warren Moon, (who looks as young as he did when he was playing, by the way!) 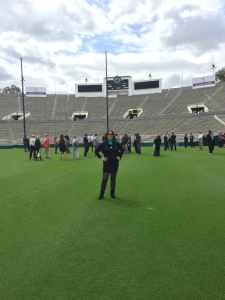 Karen Salkin, back on the Rose Bowl field! Photo by Alice Farinas.

This was the organization’s inaugural event, so I really had no idea of exactly what to expect, and I assume that was also true for the rest of the guests. But nonetheless, so many people arrived early to the Rose Bowl.  I’ve never seen lines like that except for events that are offering free beauty services to the first group of attendees! So, way to go, Sports 1 Marketing!

After they checked us in, (which I thank them for making easy enough—there was none of the drama I often see at big events,) we received a tour of the entire Rose Bowl.  I’ve been to this iconic stadium so many times over the years, mainly during my close friendship with the UCLA teams back in the day, and I’ve even been on the field, but this tour was a revelation! 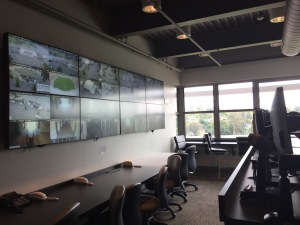 They put us in small enough groups that enabled us to see and hear everything the guide was sharing with us. We visited the Command Center, the Press Room, and the Keith Jackson Broadcast Center. And then came the best part for me, especially on a day that featured absolutely beautiful weather–we got to hang-out on the field for awhile! That was actually the second time this month that I did that, but the other was at night, so it was a different vibe then. And prior to a few weeks ago, I hadn’t been on the field since I was friends with those UCLA athletes back in the late ’90s! 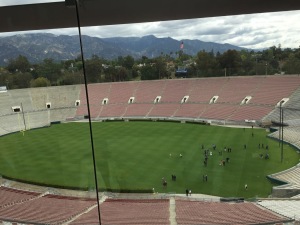 The view of the Rose Bowl Field from the Press Room. Photo by Karen Salkin.

After a bit, the VIP guests moved into the Visitors Locker Room for an hors d’oeuvres reception.  For once, the food was not the attraction for me; it was my surroundings!  Even with all my sports experiences, I had no idea that professional team’s locker rooms were so gigantic; that was eye-opening.  (Actually, back when I was doing my TV show, I played in a Celebrity Charity Softball Game in Florida’s Tampa Stadium, so I was in a locker room then.  But I was just trying to survive in that oppressive heat down there, so I wasn’t taking much notice of my environs.)

The entire group then moved on to the Home Locker Room, which was adorned with all kinds of informative Rose Bowl posters around the entire perimeter, between the ceiling and the lockers. We each grabbed a boxed lunch and took a seat at a table, so the program could begin. *[Please make sure to read my program note at the very bottom of this page, when you get down there. Hint: It’s a grammar lesson. Bet you can’t wait!]

That’s when the highlight of my day came–I got to chat with Warren Moon for a bit about my days doing sports radio!  I give him a lot of credit—everyone was clamoring for time with him, so he could have been forgiven if he didn’t engage in a conversation with me, but he totally listened to everything I had to say, and even followed-up with a couple of questions of his own. He even laughed when I told him that my method of color commenting is to discuss the athletes’ looks, say who is cute, and out the ones who really need to fix their hair!  (He has no worries at all in these categories; he’s still very attractive and has no hair!) 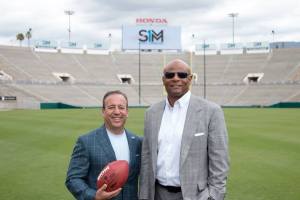 The program began with the keynote speaker, Dave Meltzer, who is the co-founder (with Warren Moon) and CEO of Sports 1 Marketing. He gave a very interesting talk, which included singing Warren’s praises.  Dave pointed-out that Warren was one of the first black quarterbacks, and then quipped that now UCLA has a Jewish one, which is even more rare.  (I know that my former sports radio partner has been jumping out of his skin over that development because he always used to lament how few Jewish athletes there are. So to have one in his own backyard must be thrilling to him.) Dave offered us some wise business advice, which I’m sure the assemblage really appreciated.

When he was finished, there was a panel discussion, led by LA Times sports writer Sam Farmer.  Ironically, and amusingly, even though he can write, he can’t really speak, which I have a feeling he’d be the first to tell you.  He was a wreck when he was on the stage by himself for a few minutes, and tried to speak to us on his own, but he came to life as soon as he got to moderate the panel discussion. His discomfort was actually quite endearing.  He’s the opposite of moi—even though I’m now a writer, it’s so much easier for me to just talk by myself, as I did on my show for all those years.  That’s why guys have always compared me to Vin Scully! (At least I hope that’s why!) Maybe Sam and I should team-up—he can do all the writing, and I’ll speak for us both, (as I always do for Mr. X.) 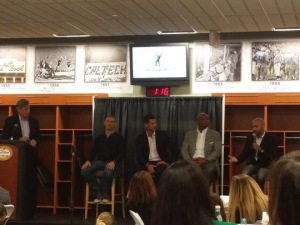 The informative panel consisted of a quartet of successful, informative gents: the aforementioned Warren Moon; Josh Booty, (who’s a former quarterback, and World Series Champion pitcher—impressive!); regenerative medicine doctor Dr. Hasan Badday, (the one I most interested to hear); and businessman Jeremy Barnett, (who was the only one who apparently did not get the “business attire” memo.)

I give Sports 1 Marketing a lot of credit for making their maiden voyage just the correct length.  Events such as this one often tend to go on and on, but this one ended at just the perfect time. 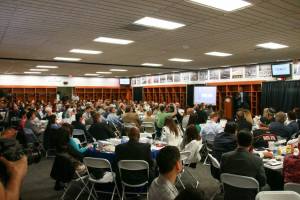 The assemblage, paying rapt attention to the program. Not a texter in the bunch! (But can you tell that I’m the only one taking notes? See if you can find me, but if not, here’s a clue–the bright blue sleeve is mine!) Photo courtesy of Sports 1 Marketing.

As an added bonus, in addition to all the knowledge we accrued that day, we each left with David’s book, which Warren wrote the forward to.  Now that I got to see them both in live action, which means I can hear their voices in my mind as I read it, I have a feeling the advice in there will mean even more to me.

I can’t wait until Sports 1 Marketing’s second event, which I believe will be this summer.  I just hope that these locker rooms are super air-conditioned!

*[Program note: Many of you know by now that, as a journalist and former teacher, (and just a person who wants everyone to speak well,) I take any teaching opportunity that I can, so here’s an easy one. It was brought up this day by one of the speakers continually saying, “me and my siblings.”  I’m not naming him, but he must have been absent the day they taught the “my (anything) and I” lesson, as, sadly, so many people were.  But I have a feeling that, being the obviously intelligent man that he is, he will be happy to learn that lesson now. (And, hopefully, now that you are reading this, you will never make that mistake again yourself.) So here’s all you need to know about that particular grammar rule: Just remember to always put yourself last. Easy enough, right? “My friend and I,” “my siblings, my cousins, and I,” “the guy I’m stalking and I,”…I think you all get it now. Sometimes the first-person word is “me,” rather than “I,” but I think I’ll save that lesson for another time. Aren’t you relieved?]