My friend Thomas and I were happy to be guests at the taping of this really fun musical and athletic entertainment show, Jump, Jive, and Thrive, which celebrated cancer survivorship.  And you’ll have the chance to see it for yourselves on CBS this week-end! 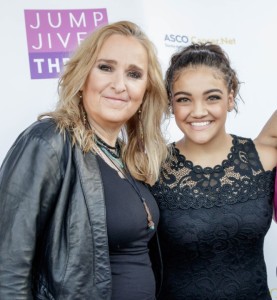 It was taped at UCLA’s historic Pauley Pavilion, which made it that much more special to me, since I was friends with many of the athletes who competed there in the late ’90s.  I don’t think I had been back there in at least ten years, and the memories just came flooding back. The feeling of walking into that building is one I always cherish.

The funds raised by Jump, Jive, and Thrive will benefit the Breast Cancer Research Foundation.  To highlight that situation, several famous cancer survivors participated, including singer Melissa Etheridge (whose singing and guitar playing I was really impressed with) and Olympic athletes Shannon Miller and Scott Hamilton, with the latter two hosting the festivities.

The very beginning of Le Petit Cirque’s performance, before it really got going. Photo by Karen Salkin.

The show combined gymnastics, music, and dance, three of my favorite branches of the arts, so I was especially enthralled by it all.  Thomas is a skateboarder, so he was impressed with all the athletic accomplishments on display that evening.

There were many highlights in the two-hour presentation, but my favorite was a special showcase by Cirque du Soleil’s youngster division, Le Petit Cirque.  They really wowed me. As with all TV tapings, some portions had to be done over, and I was sooo hoping that their number would be one of those, because I wanted to watch them again and again, but, of course, being Cirque members, they nailed it in one take. Darn. 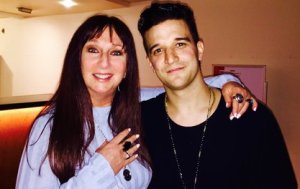 Karen Salkin and Mark Ballas, at a previous meeting. Photo by Jeanine Anderson.

And, since Mark Ballas became My New Best Friend a few months ago, (even though he may not even be aware of still holding that coveted title, since we were both too busy to even say hi at the pre-show festivities that night,) I really enjoyed his lovely singing duet (as opposed to dancing, which he is more known for,) with his beautiful bride, BC Jean.  (Their duo moniker is Alexander Jean.)  They treated us to two numbers, one upbeat and one ballad, each as appealing as the other. 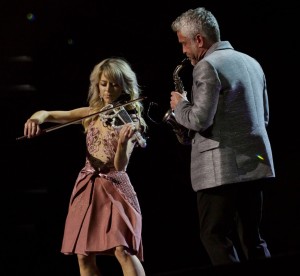 And then he introduced his current Dancing With The Stars  partner, electronic violinist Lindsey Stirling, who played her stunning rhinestone-encrusted violin, which was actually just strings on an outline!  She played with saxophonist Dave Koz, while my former New Best Friend, Olympic gold medalist Nastia Luikin did a gorgeous gymnastic routine.  I really don’t know how these ladies who have retired from the sport, (forty-year-old Shannon Miller did a routine, as well,) are able to still have such beautiful athletic skills!  It’s unbelievable.

As the evening went along, in-between the entertainment, we heard uplifting personal stories of surviving cancer from several of the participants, including one tiny little gymnast, who could not have been more than seven years old. That one really got to me. 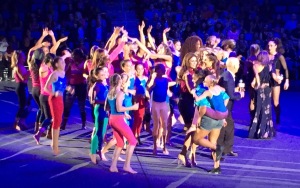 The fun closing number. Laurie Hernandez is on the front right, with the little girl on her back. Photo by Karen Salkin.

And, because UCLA’s Women’s Gymnastics coach (and cancer survivor,) Valorie Kondos Field, was involved, we were treated to plenty of tumbling, which I love. To the delight of the crowd, many of the numbers featured Olympic gold medalist (and—more importantly in this town!–Dancing With The Stars champion) Laurie Hernandez, who is really beloved for her darling and ebullient personality. I especially enjoyed a piece all the gymnasts did while former The Voice contestant Judith Hill sang, which I believe will be the closing number on the telecast. 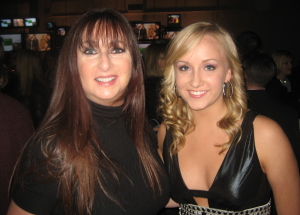 Karen Salkin and Nastia Luikin at a previous event. Photo by Lauren Bennett.

Of course, I have no idea just what portions of what we saw in person will make it into the one hour show on CBS this week-end, but I hope that Cirque de Soleil’s Le Rêve performance will make the cut. Theirs was a short presentation, but any time you get to see anything from Cirque de Soleil, I say grab it!

And I say that about this entire Jump, Jive, and Thrive show. It’s not just wonderful entertainment; there are a lot of hopeful stories about surviving cancer featured along the way.

So set your DVRs right now!!! (And if you look closely, you might even see Thomas and me cheering everyone on from the audience. Me choosing to sit in a TV taping audience is quite the rarity–but this show merits all of our presence, on so many levels–so you better catch me now!)

Jump, Jive, and Thrive will air during the day on CBS on Saturday, October 21st.  (It’s 10AM here on the west Coast, but you should check your local listings for the exact hours.)