Trending
You are at:Home»SPORTS THOUGHTS»SPORTS: DRAMATIC LAST DAY OF THE BASEBALL REGULAR SEASON 2011
By Karen Salkin on September 29, 2011 · SPORTS THOUGHTS

People always ask me why I love sports so much. They just need to look at the drama from the last day of baseball’s regular season last night to understand. I don’t even care about most of the teams in contention, but my heart was pounding watching it all unfold.

Both Wild Card races came down to the last day, which I believe is a first. I didn’t watch the National League games, although the guys on ESPN kept us apprised of what was going on, which was, sadly for the Atlanta Braves, almost equally dramatic to the American League. 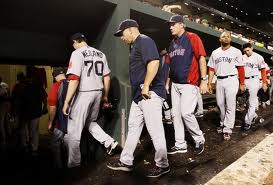 The absolutely defeated Boston Red Sox team, going into the clubhouse after their game, with still a glimmer of hope.

But, truly, I’ve rarely witnessed anything like the last few innings of both games in the AL East. The hated (by me) Boston Red Sox had been up nine games in their division as recently as September 3. The Tampa Bay Rays had been basically an afterthought for most of the season as the Sox battled my beloved Yankees for the top spot.

The Yanks clinched the division title about a week ago, which left the other two teams to battle it out for the Wild Card spot. (The Los Angeles Angels of Anaheim, with the stupidest name in all of sports, were in it for a few seconds, but not at the very end.) So, last night, the Sox and Rays, in different games, took the field with everything to win or lose. The Sox played the out-of-the-race Baltimore Orioles in that city, while the rays battled the Yanks at home in Tampa. (Well, actually St. Petersburg, but that’s not part of the story.)

I kept an eye on the scores all evening while I worked, until the late innings, when I felt this was perhaps history not to be missed. The Yanks were up on the Rays in the top of the 8th, 7-0, so I pretty much assumed, as I’m sure everyone did, that it was over for the Rays, and as long as Boston also lost, those two teams would play one game today, winner take all.

But the Sox were winning their game, which was now in a rain delay, and, as long as they won and Tampa lost, the Red Sox would be the victor in the Wild Card race.

I really didn’t know for whom to root; I wanted whatever would be best for the Yanks, even though they won’t play either one in the first series of the play-offs. Mr. X kept telling me that he thinks the Yanks would prefer for a limping Red Sox team to get in, but since it wouldn’t affect them in the first round, I would think they’d root against their arch rivals on principle alone. And I just couldn’t bring myself to root for them, either.

But it looked pretty grim for Tampa—down by seven in the next-to-last inning? Come on. So, here it was, two out in the bottom of the ninth, and up comes Dan Johnson to pinch hit. Yes, he had hit a big game-tying home run against Jonathan Papelbon, Boston’s lauded closer, in the ninth inning of an important game three years ago. But how often does lightning strike? (Not against Boston, in this case, but in a similar scenario.)

With two strikes, Johnson hit another game-tying home run! I almost couldn’t believe my eyes! And with that, the game against the Yanks went into extra innings. What an incredible feeling that must have been for him.

So, now the rain had finally stopped in Baltimore, much to the chagrin of the Red Sox, who would have won if the the game had been called off at that point because it was considered an official game in that inning, (which would have been a horrible way for the Wild Card race to end,) and ESPN returned us there.

For blow-by-blows of the innings, please google it. But suffice it to say that with Papelbon (and his dangerous stare,) on the mound for the Sox in the bottom of the ninth, up by one with two outs, it seemed like the worst they could do is go into a one-game play-off against Tampa Bay today, if both won. But, two doubles and a single later, it was all over for the Boston Red Sox. They had lost the game. And with that stunning loss, perhaps the chance to go into the play-offs. It all depended on the outcome of the by now extra-innings game taking place in Florida. And, to make it all worse for them, they had to root for the Yankees to win that game!!! That thought alone had Mr. X and me wringing our hands with glee! 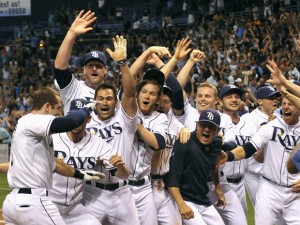 And then, literally three minutes later, it was all over. Against what was tantamount to a Yankees farm team, (as manager Joe Girardi had pulled most of his starters by then, in the middle of their seven run lead,) Evan Longoria hit the lowest and shortest home run I think I’ve ever seen.

I’ll be happy for the Rays, as long as their presence in the post-season doesn’t adversely affect my Yanks. I just wish it had taken them longer to win because the Sox had only those few minutes to have to root for the Yankees. I would have liked that to go on at least a little longer.

But what a story for the Rays!!! I like former Yankee Johnny Damon, (although he’s also a former Red Sox,) so I’m happy for him. The whole night proved, once again, that Yogi Berra was indeed right–it’s not over until it’s over.

There was similar drama in the National League, but, with the Mets long out of it, I didn’t pay much attention to it. Speaking of the Mets, the punctuation mark to this whole drama is that now, with the colossal collapse of the Boston Red Sox this month, my beloved Mets are off the hook for the worst baseball disaster in history, which happened just four years ago. I can’t even relive that one here. (It made me glad that my father had already passed on because he couldn’t have borne that pain.) This is one distinction that I’m thrilled to see go to the Red Sox.

For the play-offs that begin tomorrow, all I can say is Go Yanks!!!