Sorry for the late “review” of the Australian Open tennis tournament, (it ended on Sunday,) but it’s taken me a few days to process what I’ve just witnessed!!! On both singles sides! 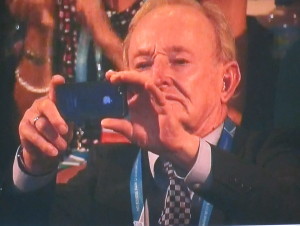 I guess I wasn’t alone in my excitement over the Men’s Final; the great Rod Laver was taking pix, too! Photo by Karen Salkin.

I don’t usually watch this one, nor much of the French Open, but when I heard who won each singles discipline, I was so overjoyed that I just had to watch the re-reruns of the two finals. (Which is plural in this case because I’m speaking of more than one; but each individual one is just a final, not finals. Please, everyone on TV, finally learn this speech lesson!)

First let me laud the victors, and then I’ll tell you a bit more about the whole tourney.

OMG!!! Stan Wawrinka, whom most of you haven’t even heard of, beat Raphael Nadal in the Men’s Final!!! I just wish I had bet on this outcome! (But, since I bet on only things I know for sure, which is always my answer to the classy inquiry, “Wanna bet?,” from just about everyone, I could not. Nor did I think Stan had even the slightest chance against Rafa; even as I was watching it, knowing the results, I was doubting!) 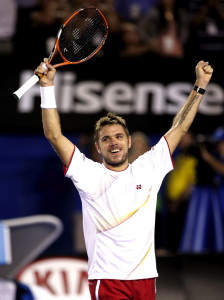 I’m so thrilled for Stan that he won his very first Major; he’s twenty-eight and has been on the pro tour for more than a decade. He’s moved up the ladder in the past year, to the Top Ten, but he’s always just an also-ran; he plays great, but seems to just miss beating the top guys. His Aussie Open fourth round match against Novak Djokovic last January is now a classic, as is last year’s US Open Semi-Final between the two. (Sadly, he lost both. But he did beat Novak along the way in this one. He’s actually the first person to beat both Novak and Rafa in one tourney, so, extra props to him!)

Stan, (whose good friend and Olympics gold medal-winning doubles partner, Roger Federer, refers to as “Stanimal,”) won his finals match against Nadal fair and square. Of course, Rafael had to get an injury when he was already losing, (which, am I the only one who always finds it suspicious when he does this?,) which made it a little harder on Stan for awhile; the commentators always make it clear how hard it is to play against an injured player, because it takes your attention away and ruins your rhythm. But Stan regained his composure, and won in four sets. 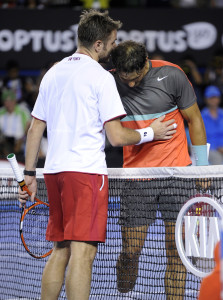 Stan checking on Rafa at the end of the Championship match.

Instead of celebrating his first Grand Slam victory by falling to his knees or violently pumping his fists, as most everyone except Roger seems to do upon winning, Stan just classily put his hands in the air, and then immediately went over to Rafa to ask how he was, and semi-console his opponent. Class all the way. How can you not root for this guy?

Outside of always rooting against Rafa because he’s been Roger Federer’s on-court arch-nemesis for all these years, I’ve always liked him, and stood up for him to his critics. (Yes, I do know how creepy it is that he picks his butt before every point, but I have to respect his superstitions.) But, I must admit now that he was sort-of a sore sport when he lost this one. Yes, he always wants to win, but he should have been happier, or at least faked it, for someone he’s been pals with since they were teens. And Stan is known as one of the nicest guys on the circuit, so more reason for Rafa to be supportive of his win, and welcome him into the small group of guys who’ve won a Grand Slam tournament in the dozen or so years since Roger has taken over tennis, big-time. 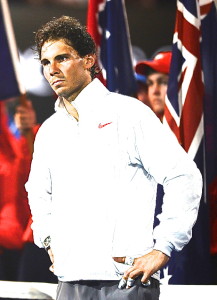 Rafa being a sourpuss at the awards ceremony. Not nice of him.

Speaking of Roger, I’m thrilled that he’s somewhat back on track, at his advanced age of thirty-two. He made it all the way to the semis at this Australian Open, but once again ran into Nadal. That’s actually the reason I find it hard to watch tennis nowadays; I just can’t bear to see Roger lose.

Speaking of losing, my how the mighty have fallen. On the women’s side, the once top-ranked Venus Williams was out in the first round! And her sister Serena, the number one seed here at the Aussie, got upset in the fourth round by the beautiful Ana Ivanovic. (I don’t know why I never hear about Ana’s looks, like we did with Anna Kournikova. I don’t think there’s ever been a more stunning-looking tennis player on the women’s side. And she’s sweet and darling, as well.) You know I’m always happy when those spoil-sport Williams sisters lose.

It seemed to be a tournament of upsets as number three seed, Maria Sharapova, lost in three in the fourth round to eventual runner-up Dominika Cibulkova. 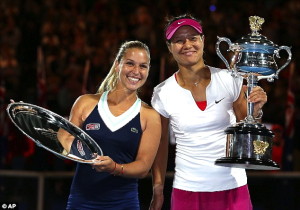 Dominika was perhaps the happiest runner-up I’ve ever seen! She made all of us viewers feel better. As the number twenty seed, she was just happy to make it to the Women’s Final, and even though she was gritty on the court during the match, the second it was over she was all smiles. Her speech was charming, and you could tell that she was genuinely happy for Li Na to win her second Major.

Li is always a crowd favorite because her post-match speeches cannot be beaten by any player anywhere. She once again charmed the crowd with a speech akin to a stand-up comedy routine. You can’t help but love the girl. She’s thirty-one, and almost retired a year or two ago. But then she began working with Justine Henin’s former coach, Carlos Rodriguez, and that has made all the difference. She’s someone who, just like her male counterpart at this tourney, Stanislas Wawrinka, is having success later on in her career, and I couldn’t be happier for her.

So, to sum up the 2014 Australian Open, it was really great to have a duo of new champions. And oldies, at that! I wish only the best for these two hard-working, deserving players, and I can’t wait to see how the rest of their year unfolds.