CELEBRATING MAY DAY 2018 WITH SPRING ODDS AND ENDS

Today is actually May Day, which I heralded here in INAM for the first time last year. It worked out so well then, that I decided to do it again this year. Once again, there’s so much to review and preview this month, (as there seems to be every year at this time.) So I’m celebrating May Day by sharing all that info with you.

Let’s begin with some quick wrap-ups: 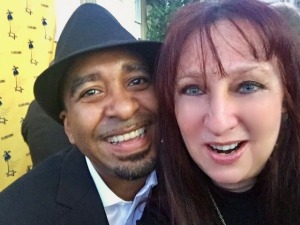 LA JEWISH FILM FESTIVAL—The opening night in Beverly Hills was really fun. After a quick dessert reception, (which featured little packages of cookies to bring into the theatre,) we settled in for a screening of Sammy Davis Jr.–I’ve Gotta Be Me, a wonderful documentary about my old pal Sammy, which featured a ton of info about the icon that even I never knew! It was so riveting that I totally forgot to eat my cookies! (And for me to forget about food is a really big deal!) I was thrilled to re-connect with his son, Manny, who was my little buddy back in the day. He made me cry that night when he told me that he had thought of me often through the years because I was “one of ” his “most precious people.” You can be sure that we’ll stay connected now. Thanks, LAJFF!!! (And there are still a couple of more nights of events, so you can still get in on the fun, here: www.lajfilmfest.org.)

A SHAKESPEARE JUBILEE AT THE WALLIS—This kick-off of BritWeek in L.A. did not disappoint. I’m far from a fan of Shakespeare, but with so many on-stage participants, there was a lot of variety, (including some opera!,) and no scenes were too long. Shockingly, (because he’s not an actor,) Nigel Lythgoe’s appearance as Bottom from A Midsummer Night’s Dream, complete with four fairy children, was the hit of the evening! (That’s a photo of the evening’s entire cast at the top of this page, by Rex Geert.) 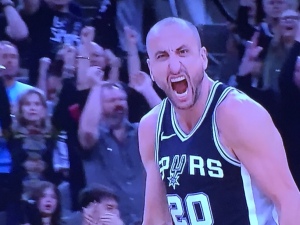 THE NBA PLAY-OFFS, TO THIS POINT—I plan to write about the NBA play-offs at length again this year, but here are a few quick observations so far, to tide-over my fellow sports fans out there: 1) Brent Barry is the best commentator. He’s no-nonsense, has a soothing voice, and gives us lots of good sense info. 2) I’m in love with Jazz stars Ricky Rubio and Donavan Mitchell!!! 3) The Utah Jazz is my fave team now, followed by the Philadelphia Seventy-Sixers. 4) Chris Weber always tells us what the players are “saying,” which just cracks me up. 5) I hadn’t realized that nutty Lance Stephenson of the Indiana Pacers went to Lincoln High School in Brooklyn!!! So did my father, who later became the Chairman of the Speech Department there, and also the President of the Alumni Association, which he actually founded! So, no wonder I get a kick out of his antics. (Those of Lance, not my deceased dad!) And lastly, for now, 5) I wept when it might be the last games of Dwayne Wade, Tony Parker, and mostly Manu Ginobli. But it is sort-of nice to witness exciting new blood. 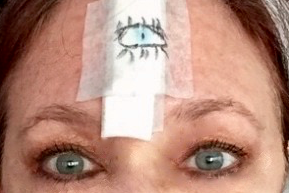 Karen Salkin, rocking her bandage in her own creative way. Photo by Mr. X.

SURGERY UPDATE—My dozen stitches came out last week, so now I’m on the mend. I’m thrilled to be out of the woods with this particular skin cancer episode, but now I have to be checked, all over!, every six months. I guess it’s time to find a woman derm because I’m not getting undressed in front of a male, other than Mr. X, of course! (But he only played a doctor on TV!) And a female I still look better than, because I don’t want to imagine that she’s judging me. And winning! (She may be a doctor but we’re all girls first.) I’m still in a lot of pain, but knock on wood for make-up and bangs! I don’t think that anyone can see how bad it looks right now. (If you missed the whole story, with my health warning to everybody, you can, and should, read it here: itsnotaboutme.tv/news/health-skin-cancer-surgery-with-a-warning-for-you-all.)

And now, a few upcoming events that you should not miss: 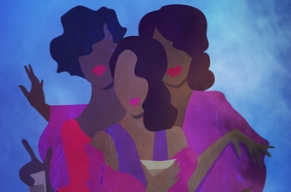 BLUES IN THE NIGHT—I’ve really missed former Artistic Director Sheldon Epps at the Pasadena Playhouse, so I’m looking very forward to his show at The Wallis this month, Blues in the Night, which he originally produced on Broadway way back in the ’80s! But since it’s comprised of all old blues songs, which tell the story, I’m sure it’s timeless. I’ll do a full review of it next week, but if you just can’t wait, you can get your tickets here right now: www.thewallis.org.

MASTERS OF TASTE—I hope all L.A. foodies will be joining me at the Rose Bowl this Sunday for this really fun, and filling, event! I cannot wait for it! Here’s the story, with all the info you need to join me there this week-end: itsnotaboutme.tv/news/eventdining-masters-of-taste-2018-preview. 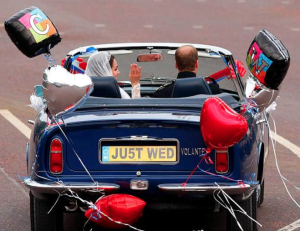 The previous fabulous Royal Wedding. (We Americans erroneously thought that Kate was doing the driving.)

THE STUPID ROYAL WEDDING—Let’s just all place bets on how soon creepy Meghan Markle will start speaking with a phony British accent, ala Madonna and Oprah Winfrey. (And also how soon the Brits will start referring to her as “our Meggie!” This e-zine is copy-written, so please remember that you heard it here first!) I’ve been a champion of Prince Harry since he was a kid, so I was hoping for a wife I like better for him. I felt awful for him to lose his precious mother so young, (and, of course, for William, as well,) and to be left with an aloof father, and then have to hear about your erroneous parentage forever. (We all know that he looks just like Diana’s boyfriend during her marriage to Charles, James Hewitt. Harry is the spitting image of him! Everyone knows it, the same way that we all know that Ronan Farrow is the son of Frank Sinatra and not Woody Allen.) I do believe that Harry loves this woman; I just hope that she does him, as opposed to being married to her life-long quest for fame. That Mr. X doesn’t trust her, either, gives me even more pause—he’s rarely wrong about anybody. I’ll still be watching the wedding at the crack of dawn on May 19th, but without the joy that I felt when William and Kate wed. Oh well. But the most important question is—what will I wear to watch it??? A fascinator, for sure. But what topper goes with a fuzzy bathrobe? [Note: I’ll be giving you all the tips for watching the royal nuptials the day before they happen, so please keep an eye out for that article.]

And last but not least, we have…MY GARAGE SALE!!! I hope that strangers have no idea where I live, but if you’re one of my supportive pals reading this, just get in touch with me privately for the deets. I really don’t want to get rid of anything I own, but it’s either that or get rich and move to a bigger house.