Trending
You are at:Home»OLYMPICS»OLYMPICS: WINTER OLYMPICS 2022 WRAP-UP
By Karen Salkin on February 25, 2022 · OLYMPICS

Well, another Olympics has come and (finally) gone, and once again I watched every second of the Games. 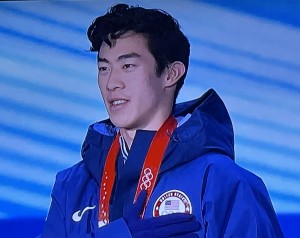 Nathan Chen with his very deserved Gold Medal. (This is weird–he looks at least ten years older on the Medal Stand here than he does in every other instance!) Photo by Karen Salkin, as is the one at the top of this page.

First of all, I apologize for not tweeting for the entire two and a half weeks, (except once, to correct full-of-herself NBC late-night host Maria Taylor for constantly incorrectly referring to Olympic Champion Nathan Chen and Nathan Chin.) I was just way too engrossed in the proceedings to do normal things, like sleep! I didn’t even check emails, phone messages, the news, or social media the whole time—I didn’t want to see any results because I was usually behind in my watching.

The television coverage was around the clock, on two different channels. Most of the sports on USA were shown live, while most of NBC’s were snippets of what we had already seen on USA. But Beijing is sixteen hours ahead of Los Angeles, so I usually didn’t get caught-up, even if I stayed awake until 5AM!

But I did manage to see it all. And so much of it had me in tears—happy ones. 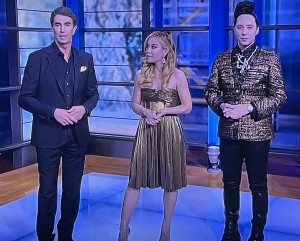 Tara and Johnny, along with host Terry Gannon, demonstrating the stupid NBC stance, in triplet, that I mention below. Photo by Karen Salkin.

Except for the Figure Skating debacle, which I have so much to say about that I’m giving that tale its own article next week. So stay tuned for that. (Unless you’re creepy Tara Lipinski or so-much-less-fabulous-than-he-thinks-he-is Johnny Weir. Those two might want to look away.) [Note: I used to love Johnny back in the day, so that I don’t now makes me sad. He even called me right after I first met him, and I was downright giddy about it. But next week you’ll read why I’m not a fan right now.]

Unlike I’ve done in previous Olympics Wrap-ups, I didn’t take notes during the presentations. So I’m winging it here, a few days after it was all done.

Actually, I had planned on not reporting on this one at all, which freed me up to just watch and not worry about writing about what I was seeing. But then, on the penultimate night of the games, I looked-up David Wise, one of the athletes, in this e-zine, because I remembered writing something good about him four years ago, and I was happy to discover that I loved him back then, as well.

And then, as I perused that entire article, the warm feelings those remembrances gave me also made me feel somewhat bad that I had not done any of that for this Olympics. So I realized right then and there that as hard as it would be for me to try to remember every single thing that happened for the past two and a half weeks, I would have to make my best effort to do so. So here I am. 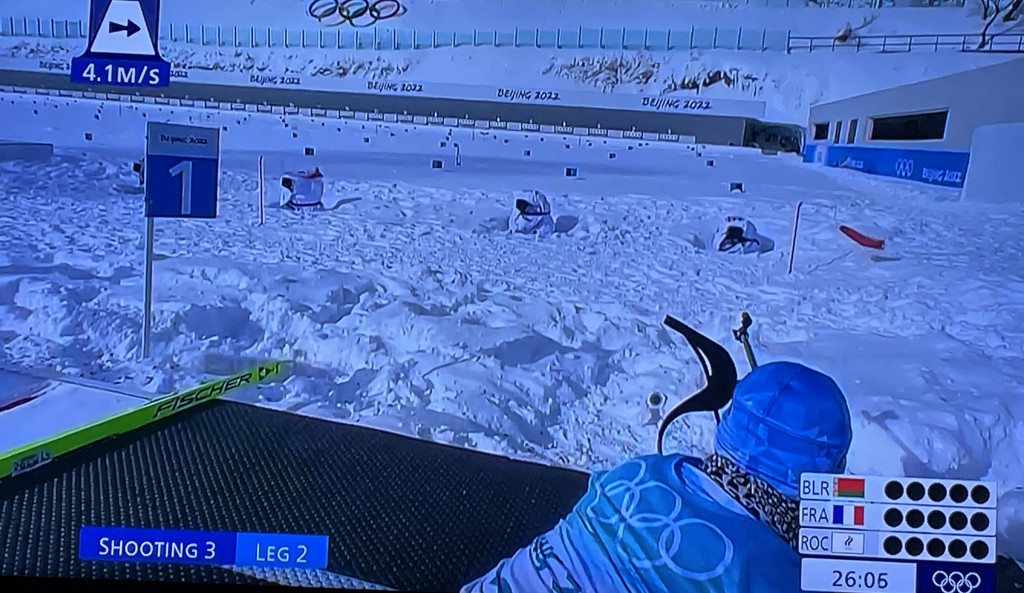 Fascinating Biathalon. The athletes have to get their shots in those tiny far-away targets…in the wind…and brutal cold…in-between cross-country skiing! Photo by Karen Salkin.

And now, here are some of my thoughts on the 2022 Winter Olympics, in absolutely no particular order:

~ Let me begin with the aforementioned Freestyle Skiing multiple Half-pipe medalist, David Wise. He said, “Set high hopes and expectations low.” That’s a great motto for all of us.

~ The two women I’d most like to be friends with are multiple bobsled medalist Elana Meyers Taylor and speed-skating medalist Brittany Bowe.  I guess everyone feels the same way because they were voted flag bearers!  Lovely ladies. Elana is always upbeat, no matter what life throws at her, and Brittany is one of the absolute most unselfish people I’ve ever heard of! In case you missed my January tweet about her incredible kindness, she gave her own spot in one of her only two Olympics races to Erin Jackson, who had a mishap in the US Olympic trials. That’s unheard of. (And Erin won the Gold!!! I feel she should have thanked Brittany in all of her post-skate interviews, though. She would not have had that opportunity without Brittany’s unique kindness.)

~ The ISU needs to stop allowing females to do quadruple jumps. Period! Doing them hurts these young girls’ bodies for the rest of their lives. (Some people think they should just make the minimum age to compete higher, but I think mine is a much better decision.)

Another instance of that stupid (I’m sure) mandated stance, this time by one of the studio hosts, Lindsay Czarniak. I actually took this pic to show her dreadful wardrobe, so it’s doing double-duty here. Who dressed these people???Photo by Karen Salkin.

~ The stupid stance that all the studio reporters used, with their hands folded in front of their belly buttons, was soooo annoying. Obviously, the NBC powers mandated that to their on-air employees, but it all just looked wrong. And a tad cult-ish.

~ There is usually at least one athlete with a big fun personality at the Olympics, like skater Adam Rippon last go-round, but I didn’t really see any this time.  Norwegian biathlete JT Boe gave the most amusing interview after winning one of his many medals, in not even his native language, but he was about it.

~ Why did the Cross-Country Skiing commentators never once mention Marit Bjorgen??? She’s not only a five-time Olympian, but her total number of medals is a record fifteen, the most by any athlete in Winter Olympics history!!! They kept harking back to everyone else they could possibly think of, but nary a word about this amazing champion! I seriously don’t get the glaring omission. (I should have tweeted to ask them about it, but again, I had no time to tweet.)

~ It was offensive that not once did they give us the entire results from a competition. They told us the top three, but sometimes not even further down than that! Not even for the American athletes involved.

~ And some sports, specifically Biathlon and Cross-Country Skiing, hardly or never mentioned the lower-down American competitors!!! Yes, most viewers care about only the medal contenders, but these athletes’ families and friends and team members would have wanted to at least hear their loved ones’ names during the Olympics they were sure to be watching. Shameful of the NBC peeps.

~ But they sure did give tons of coverage to the US traitor, Eileen Gu! If you don’t know the story, she’s an eighteen-year-old champion Freestyle skier. (Which means she does tricks, not goes down a hill.) She grew up, and still lives, in San Francisco, and competed for the United States until a couple of years ago. Her mother is Chinese so now she chose to compete for that country at the Olympics. I totally understand when someone who wouldn’t make the US team competes on behalf of a different country, because they wouldn’t get a crack at international competitions otherwise, but Eileen would have been the number one choice in America, so she just shunned us. I wonder how she’ll be treated by her fellow students at Stanford next year. 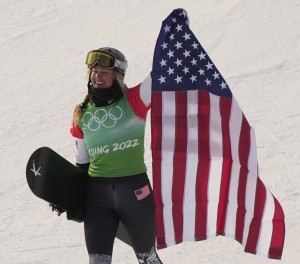 Snowboard Cross two-time Gold Medalist Lindsey Jacobellis. (Do you think the initial “K” on her board is a message to me?)

~ I’m soooo happy for Snowboard Cross two-time Gold Medalist Lindsey Jacobellis. She had done something silly when she was about to win the Gold in 2006, so she wound-up with the silver medal back then. Then she didn’t even make the Final in the next two Olympics, and wound-up in a sad fourth place last time. So that she not only prevailed to win the individual Gold but also the Mixed Doubles Gold in Beijing was a joy to witness. Talk about determination!!! She’s been at the top of her sport all these years, and has stayed at it.

~ I’m also happy for three crazy-determined extreme sports dudes who all came back from horrible situations—I have no idea how any of them were able to do it! Canadian Max Parrot came back from cancer to professionally snowboard again! His countryman Mark McMorris did the same from a very debilitating accident while doing the sport, and American Big Air Free-skier Colby Stevenson came back from the same-intensity car crash. And they were all so pleasant and grateful, (as they should be.) I loved them all. And now all three are Olympic medalists!

~ Luge is a sort-of stupid sport, in my opinion. But hey—whatever floats your boat. Or sled. 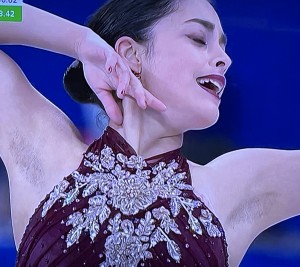 How could her coaches have let her perform with this stubble??? Photo by Karen Salkin.

~ Mr. X and I were shocked to see dark stubble on the armpits of one girl skater from Canada. (She was the only one from there, so you can look her up, if you’re curious. I don’t want to name her because she’s young.) I honestly thought shaving well was Figure Skating 101.

~ But I was crushed for Brown student Vincent Zhou to have missed his entire competition because he tested positive for Covid after his participation in the team skating event. I hope he shows the world what he’s got in the upcoming World Championships next month!

~ Once again, NBC showed us just a handful of skaters in their final-day Gala. It should have been at least twenty performers!!! What a shame.

~ And they had former US Champ Ashley Wagner commentate on those skaters. I’m sure she was trying hard, but she just kept saying she was so proud of each of them. Their careers have nothing to do with her, so it’s not for her to be proud of them! She needs to come up with other things to say, if she ever even gets hired again.

~ Those Norwegians sure are wonderful in Nordic events. The Cross-Country and Biathlon competitions were among my favorite of the Games! 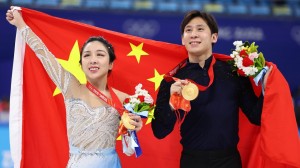 ~ I love that the winners of the very last Figure Skating competition this time, (and one of the last of the entire Olympics,) were the Chinese pair, Sui Wenjing and Han Cong. The pressure on them, in their home country, especially China, was beyond enormous. So for them to come with that glorious program, and right after three perfect Russian pairs, to boot, was amazing. Truly. (But God forbid NBC would have shown them getting on the ersatz stand right after the competition, with the entire assemblage cheering for them! I hate that network for that omission!)

~You guys will never guess my favorite Olympics sport to watch. Ready? It’s the “crosses”–Snowboard Cross and Ski Cross. I could watch those all day!

~ It was heartwarming to witness thirty-five-year-old Shaun White end his Olympic career. And the dude still came in fourth! I know he wanted to medal—again—but just competing and coming in so high up was amazing. And we got to see him pass the proverbial torch to the young guys.

And now, the sun has set on the 2022 Beijing Winter Olympics. Photo by Karen Salkin.

I really have so much more to say on the subject, but when I arrived at this point in writing this article, insane Putin invaded Ukraine, and the situation is so horrific that my mind just can’t concentrate on anything else right now.

If I’m up for writing the rest of my thoughts in the next few days, I’ll either do a second Olympics Wrap-up, or put them in the Comments below. I hope you’ll all share your own thoughts there, as well. I really personally know only a handful of other people who watch the Olympics, (which is a shame,) so I’d love to see what everyone else has to say on the subject.

Now on to France for the Summer Olympics in 2024!