At the beginning of the year, I bumped into a female I met a few years ago, who had been a fan of my show. She looked a million times better now, although I couldn’t really see any major differences in her appearance; she had the same hair, same body, same make-up, and dressed the same.

So, what made her younger-looking now? Her neck! She had had it “done,” and let me tell you, it was sooooo much better than it was before. But, she had to have the surgery twice, which could not have been fun, and the whole shebang cost her so many more thousands than I’ve ever made in a year!

And it got me worrying about my own neck area; I have a tiny chin to begin with, and I’ve gained weight since I broke my back a couple of years ago, and therefore, can’t exercise for awhile. I’m so worried that her basic situation will happen to me when I have the back surgery and then lose the weight. As it is, all my weight goes straight to my neck anyway. Fun, eh? 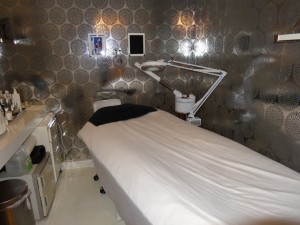 A basic facial room at the glamorous Deify. Photos by Lauren Clarke-Bennett.

I tell you all this not to complain, (and I definitely didn’t want to bust my own beauty deficits to the public!,) but to share something potentially fabulous that a friend of mine, Lauren, discovered at Deify Laser + Beauty Lounge in New York. She knew that I’m terrified of any kind of surgery. (And, of course, getting the titanium rods implanted in my back comes before anything elective.) I had actually made a mental note, when I saw the new-necked woman in L.A., to look for alternative therapies in that area ahead of time.

So, earlier this month, I accompanied Lauren to the Limelight building in Chelsea to see what the Deify had to offer in that department. (She was getting a basic facial.) And when I saw their many services, I thought they were going to have to work on my jaw because it had dropped to the floor! I couldn’t believe most of these things existed!

They do feature the usual beauty experiences, like hair and nails, but their host of laser treatments is what got to me. I knew I wouldn’t be in town long enough to complete the recommended series of four to six sessions spaced three to six weeks apart, but I did want to try it out and see if I wanted to continue when I was in New York again. So, I went ahead with the first one, and hope to be back in the Big Apple soon. Obviously, you don’t see results without the entire group of sessions, but Lauren thought she saw an improvement in me after just one and a half. (Don’t ask about the half—the traffic caused me to miss most of my second scheduled one, but they were kind enough to squeeze me in for a little bit of work anyway.)

First of all, it basically doesn’t hurt, except a bit on the forehead, which my tech, the fabulous Diana Pops, was smart enough to do at the end. (We did it on my whole face, rather than just my neck, because I figured I may as well go all the way, a philosophy many guys wish I had had in place back in the day!) Second of all, it’s actually kind-of relaxing. You just lie there, in comfortable surroundings, with girls with beautiful skin themselves doing all the work! What could be bad?!

To expound on that last point, I must say that just about every female who works there, from the owner, Melissa Cavanaugh, to the girls who check you in, has wonderful skin. That gave me trust right away. As I’ve said, (and written,) many times before, would you go to a manicurist with bad nails, a hairdresser with bad hair, and—worst of all—a dentist with bad teeth??? Of course not, so seeing an aesthetician with bad skin would not be great, either. And these ladies all look great.

None moreso than Diana Pops. Besides the great skin and overall good looks, she’s darling! She reminded me of my Austrian friends, Alex and Simone, who are the kindest, most supportive people in the world. I actually started crying on the laser table, telling Diana about them, and she didn’t even laugh at my pain, like everyone else does! How sweet is that?! And her great skin makes her look ten years younger than she is! That’s who I want working on my looks, let me tell you! 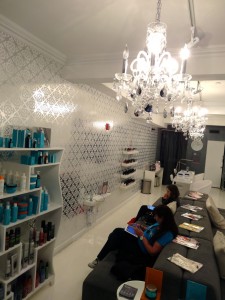 Now, I have to tell you a few things about the whole spa area. It’s all silver and white and soothing. I felt like I was in a movie! It’s upstairs at the historic Limelight building, which was first a church waaaay back in the day, (the stained glass art is still up, thank goodness,) then a disco, (can you imagine,) then recently a marketplace, and now a bunch of upscale stores.

You sign in on iPads, rather than with pen and paper, and then relax on the classy couches. But not for long because I have a feeling they’re always on-time with your appointments. I noticed in my two visits that they’re all really punctual there, and never want to make the next client wait. Admirable of them, especially in crazy busy NYC!

I’m sorry that I can’t give you the definitive word on this Laser Skin Tightening Treatment yet, but I promise I will in the months to come, when I have the whole set of them. In the meantime, if you’re headquartered in New York full-time, and go to Deify for the series, we’d all love to hear from you. If unlike me, you don’t want to admit that you had it done, I understand. Just tell me that your comment is private.

But, never one to keep beauty secrets to myself, I promise to keep you posted as mine progress. I have a great feeling about the results. And I’ll be happy to share!