I arrived in New York last month just in time for the launch party celebrating Isaac Mizrahi’s new handbag collection. Let me just sum up the event this way: I wish I still taped my TV show because there were so many stories from this day!!! It would be so much easier to talk about than to write about with the full gusto that I lived it. But I’ll give it my best shot. 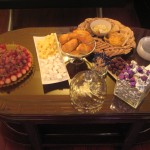 The spread at Christo NYC.

The day began with a visit to Christo NYC, on classy Fifth Avenue, for hair and make-up. As part of the event, Christo was making us beautiful to attend it! I still don’t know exactly why–I hope it was that they wanted to hook-up certain of us “littlest celebs” (and one very big one!), rather than that they picked the worst-looking of us to make us presentable! (I don’t even know why that thought entered my mind!)

Christo’s salon was very lovely and sooo NYC! I loved the feeling I had there. They almost couldn’t get rid of me! Possibly because he’s Greek, he had a lovely spread of snacks for us, like hummus, fruit, chocolates, and my favorite–spanikopita!!! (Greek spinach pies for those of you who are less worldly than I.) It was really very thoughtful.

Christo asked each of us what we were wearing, to have a clue as to what style would be right for the evening. Some of the other girls were adventurous and said anything goes. I, on the other hand, said I wanted the long straight hair I came in with, just clean! And to my surprise, they went along with it, with no abuse! How refreshing! 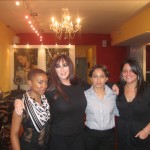 The Christo staff who made Karen presentable: Kenecia, Rosa, and Christina.

After Christina Castellano shampooed me, and Rosa Miranda did my blow-out, I moved on to Kenecia LaShae Wright for make-up. (And special thanks to the super-pleasant and welcoming reception-host, Steven, for helping me out with everyone’s names.) I was so relaxed by that point that I didn’t interfere in any of it. I didn’t even look in the mirror till it was all done! And Kenecia did a great job, which is rare in my experience. I didn’t even think of fixing my make-up, which I’ve always done, even on movie sets. 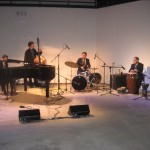 The jazz combo that set the mood for all this celebrity mingling!

So, all beautiful and ready, my pals and I arrived at NYC’s newest party venue, Stage 37, on W. 37th and 10th Ave. It was just a giant warehouse, with a bar on one side, a lovely jazz combo situated on the other, and a giant phalanx of TV screens in the middle. A few tables and chairs wouldn’t have hurt. 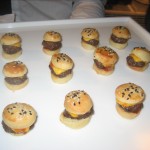 For once, though the passed snacks by Creative Edge Catering were really great, especially the mac ’n cheese in parmesan cups and mini cheeseburgers, (served with exquisite linen cocktail napkins, by cute, pleasant waiters), the celebs outshone the vittles! Trust me on how rare that is for me to state. There were several I didn’t give a hoot about, like the Olsen twins, but I had four stand-outs. (Hint: I’m saving the best for last.) 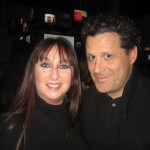 Firstly, the man of the hour, Isaac Mizrahi himself! Even though I’m outgoing and talk a lot (which any of you who’ve seen my show are aware of,) I never walk-up and bother celebrities I don’t personally know, (except for when I first stalked met Adam Lambert, but he wasn’t famous yet.) But, luckily for me, my friend Lauren has no such problem. She just goes right up and asks them to take a picture with me for my various columns. I cringed when she went up to Isaac, but he was absolutely darling! He even looked at the camera for her to see if it was on the correct setting! How lovely and patient of him. And shamefully, I would not have guessed that at all. 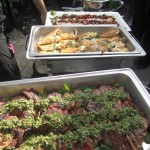 On the way out of Cristo’s earlier that day, I saw a cute blonde young girl who had her hair in curls, and figured she was one of the other guests for that night. We started talking about our ’dos, and said we’d see each other at the party. I introduced myself and asked her name. I almost fainted when she answered, “Nastia.” I said, “Lukin???” It was the current Olympic gymnastics all-around champion, Nastia Lukin!!! I told her that I must’ve just been into myself at the salon to not have known it was she!!! I’m still ashamed of myself over a month later! She was so not full of herself and was darn right adorable. We acted like old friends when we re-connected at the party.

As a crazy Gossip Girl fan, I was thrilled to meet Kelly Rutherford, who plays Lily Van der Woodsen Bass Humphrey. I’ve known of her for quite awhile because we had an old mutual friend, and when I mentioned him she was so fun and complimentary about him. I loved her honesty! Not everyone remembers their beginnings. 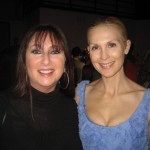 Karen with Gossip Girl mom, Kelly Rutherford, who’s as classy as the character she plays.

Towards the end of the party, I saw a gorgeous man in a beautiful suit standing near me, and my heart stopped–it was one of my big crushes, James Tupper! After being so sexy on the late, lamented Men In Trees, he’s the only reason to watch this season’s Mercy. On the former, he met his lady love, the very talented Anne Heche, who was there with him.

I had just finished telling my friend, Tattie, (don’t ask) that if Lauren were around, she’d be taking a picture of us. No sooner had the words left my lips than Lauren appeared, inquiring that very thing! I absolutely love James, (isn’t that clear by now), but wanted to be polite and include Anne. She was very sweet and put me in the center, something I probably wouldn’t do with Mr. X’s female fans. Unless they weren’t the least bit good-looking. Oh no–maybe that’s what Anne was thinking abut me! Bite my tongue.

Anyway, when the pic was snapped, James and I had a long conversation about children. He told me that their son is now 7-months-old, and said, “It’s the greatest thing I’ve ever done.” After I said, “Ahhhhh,” I told him the greatest thing I’d ever done is not have kids! To my delight, he laughed heartily, and wound-up having the same reaction to most of what I said! I love a man with a great sense of humor! 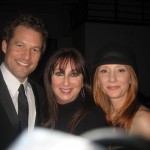 Karen with James Tupper and Anne Heche. (She thought of cutting Anne out and using this as her Holiday card!)

We met up again a few minutes later because I decided to let him in on what I was telling my friends there–that he’s on my Crush List! (Lauren said, “What a great idea–where’s the list? On your site?” I answered, “No; on my desktop!” So, one of these days, you just might see it up here.) Anyhow, he responded not with disdain, but curiosity as to his place on the list! The repartee went like this:

Me: “I forgot to tell you something, but don’t get nervous, I have my own boyfriend, but you’re on my Crush List.”

James Tupper: “But the important thing is: what number am I?”

(Hearty laughter all around.) [I didn’t have the heart to tell him he was 9th, “was” being the operative word here because I moved him way up to second the instant I got home!]

Really, what a great gift to meet an actor you admire and find out he’s also a delightful person. It was the perfect end to a perfect event.

And the night got even better when my beloved Yankees won the World Series a few hours later. I think this was the best night I ever had in NY!!! Outside of that January 14 early morning on which I was born there.