You may think that National Mincemeat Day is a weird one for me to be celebrating in this e-zine, but it’s not really. As those of you who were viewers of my former television show know, I can talk about anything to anyone. An old friend of mine, who used to come with me to many events, accompanied me to one where, without my prior knowledge, I was one of the attractions! I was seated at a table with my name on it, (literally,) and travel industry reps came to pitch me their all-over-the-world cities. As she watched me chat with all those total strangers, she exclaimed, “You have something to say to everybody!” Ever since she pointed that out, I’ve prided myself on that ability. 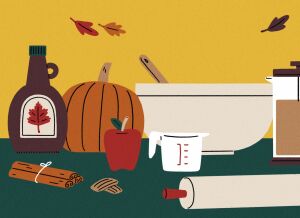 So National Mincemeat Day is just another one of those occasions. It may seem like an obscure topic, but I actually have a personal story to celebrate the day. So here it is, (and sorry, but it does not include a recipe, the lack of which you’re actually lucky about!):

When I was twenty, and had been seeing my boyfriend, Omar, for just about four months, I had already learned a lot of his family’s eating choices, as we spent so much time at their house. I knew that he loved his mother’s mincemeat pie, (which I had never even heard of before!,) which she made every Thanksgiving and Christmas.

So this was our first Thanksgiving together, and he came from Rhode Island to spend that four-day week-end with my family in Brooklyn. My parents already had plans to join my sister’s in-laws for actual Thanksgiving dinner, and didn’t really know them well enough to ask to bring two more to their tiny apartment. But Omar said that he was actually happy to stay home, just the two of us, being cozy in my family’s house. He got to watch football undisturbed, he ate whatever he wanted to all day, and best of all, (of course,) he got to hang out with me! What more could a man want from a Thanksgiving?

My parents were kind enough to make a giant turkey, and plenty of (deli-purchased, not homemade) side dishes, for us before they left for the day. 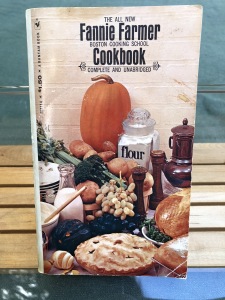 My original Fannie Farmer Boston Cooking School Cookbook. And yes–I DO still have it! Photo by Karen Salkin.

And I had planned a big surprise for Omar–I was going to make him a mincemeat pie…from scratch!!! Mind you, I was twenty-years-old, and had never cooked in my life! I had taken Home Economics in junior high, so I knew how to make muffins and macaroni-and-cheese, (barely,) but that was about it.

But I had a friend at Bantam Books who gave me every cookbook imaginable. I loved them because I was always fascinated with food and recipes, although I never made anything myself. As I told Johnny Carson in my first appearance on The Tonight Show, “My mother taught me how not to cook.”

While Omar watched at least one whole several-hour football game, li’l ol’ me was toiling in the kitchen, baking a mincemeat pie, from the iconic Fannie Farmer Cookbook, the recipe for which featured sixteen ingredients, (not even including the homemade pie crust, which, of course, I made, too!) Not the least of which was beef, of course. It’s mincemeat, right?

So after all those hours of baking, we finally sat down and had our two-person Thanksgiving dinner, which was delicious. And then, I triumphantly brought out my surprise for him–my fully-homemade mincemeat pie! I had never been prouder in my whole life. And then, after one bite, he let out a yell, and asked, “What is this? It tastes like meat!” 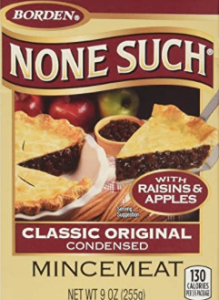 Panic-stricken, I defensively stated, “Of course there’s meat in it! It’s mincemeat pic!!!” So Omar asked me where the box was. And I said, “Box? What do you mean by box???” So he asked me how I made it. When I showed him the long recipe, he started laughing. He told me that his mother just opened a little box and put the contents into a pre-made piecrust with some water. And he loved hers! He said mine was so disgusting that he couldn’t even pretend to eat any more of it. So five or six hours of labor, and about $150. in ingredients, (not to mention forcing my poor little mother to shop for all that craziness!,) all to be a good girlfriend. And all down the tubes.

I should have learned my lesson from that debacle, but I made another cooking mistake for Mr. X in the beginning of our relationship. (If you’d like to be privy to that story, here’s the link to my YouTube video about it: www.youtube.com/watch?v=RqZEk2DNVts&t=36s.) So basically, I’m the smartest girl who ever lived—I got both my long-term boyfriends to ask me to never cook again! No problemo here.

My advice to any of you who want to celebrate National Mincemeat Day is to just look for that little box, and do not make the pie from scratch. Or better yet, just buy it from a pie store.

[Note: Yes, ladies and gentlemen, this is how we used recipes before the internet. That I knew where not only my cookbooks are in my cluttered abode, but where this cookbook holder is, confirms for me that I am the genius people refer to me as! You have no idea. I even know from whence they came! And despite my 100+ cookbooks, I use the internet exclusively for recipes these days. Except for Jello ones, of course—for those, I always refer to my most cherished cookbook ever—The Jello Cookbook!]