I must admit I’m scared out of my wits. As scared as I am, I just can’t stand having incredibly painful, numb hands, wrists, and fingers. I hate surgery of any kind, (as evidenced by my original nose,) but even worse to me is being knocked out, even if it’s not all the way. Trust me, there are a few procedures I would already have had done if I didn’t mind the whole process! 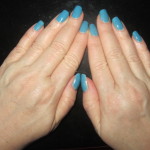 So anyhow, I’m not telling you about my hand surgery to get sympathy; rather, I just want to let you know that if there are no new columns in the next week or so, that’s the reason why. I’ve been trying to work extra hard to get ahead in my columns, so that I can keep everyone entertained while I’m lying in bed freaking-out during the recovery period; hopefully they will last until I’m able to think creatively again. (I also just may use this time to introduce a guest columnist or two, so I hope that will be interesting for everybody concerned.)

And even though I now use a dictation program so I can write without using my hands a lot, it’s not infallible. You can’t really make spelling mistakes with it, but it mis-reads a lot, and it misunderstands what I’m saying a lot. (Don’t you all?) And sometimes when I proofread, I don’t notice those mistakes because everything is spelled correctly. So, I still have to use both hands more often than I’d like, even though it’sninety percent less than usual. I’m still worried about typing that ten percent with just my left hand in the next six weeks or so. (Good thing I’m slightly ambidextrous, but I’ve usually used my left hand for just throwing a ball, and for the few minutes that I played guitar back in the day, as my tribute to Paul McCartney.)

Trust me, I’m not just wallowing in self-pity over my hand situation; the one I really feel bad for is Mr. X. (And not just for the obvious “loss of affection” reasons, if you get my drift.) It can’t be fun waiting on someone hand and foot for months on end, even if it is your loved one. I’m so grateful for him. And if I can just sleep through the next week or so, I’m sure we’ll both be grateful.

And lastly, I just wanted to point out to everyone that they should notice just how much they rely on their hands, so that you all will be as kind to them as possible. I know I’ll be kissing mine like long-lost friends when they finally get better. (Only my real long-lost friends know if that involves tongues, but they’ll never tell.)

[Note: Getting ready to be at said surgery in time is the only reason I’m not taking the time to change today’s column to my thoughts on last night’s travesty at the Yankees-Red Sox game. Suffice it to say that the Red Sox evil pitcher, Ryan Dempster, threw the ball at Yankee Alex Rodriguez four times, in an attempt to hit him on purpose, finally hitting him hard in the rib cage on the fourth try. It’s fine with me if you want to feel that a guy is guilty of whatever he’s accused of in the performance-enhancing drug situation, but it’s beyond thuggish to try to injure another player. It’s virtually assault!

And the home plate umpire, Brian O’Nora, didn’t even throw Dempster out of the game! He just gave him a warning, and gave the Yankees one, too, when A-Rod didn’t even do anything! He didn’t even say a word. But Yankee manager Joe Girardi got thrown out for pointing-out what a terrible decision that was! In all my years of watching the Yankees, I’ve never seen Joe that upset. O’Nora is just lucky that I  wasn’t there to get in his face because I’m already having surgery on my hands today; I might have used them! Even the game’s commentators, who are definitely down on A-Rod themselves right now, talked the whole rest of the game about how shocked they were that the ump did not eject that rotten pitcher.

I haven’t use the word “ugly” since I was a little girl, but now I must say that the Boston Red Sox team is the ugliest group of men I’ve laid eyes on in professional sports. Besides their filthy, nauseating, straggly Amish beards, (just whose idea was that?!,) they’re ugly inside, as well, which is really the only place it counts. I’ll be rooting against them now more than I ever have.]