When I began to write down my personal highlights of 2014, something that happened in my past came to me. My two best buds when I was young were Prescott and Ron, two little boys in Rhode Island. I was visiting them one December when Ron had to write an essay about the people in his family. Since I was staying with them, and we had such a great time together, of course he put me in the story. But his mother pointed-out that it was just because I was there in person, and that he would not have thought of me otherwise. Duh.

So, I didn’t want to do that with this column of happiness. When I sat down to write it, I immediately thought of the recent production I loved at the Pasadena Playhouse, Sleeping Beauty and Her Winter Knight, and of having the privilege of seeing Angela Lansbury perform in Blithe Spirit at the Ahmanson Theatre this month. But, then I realized that, like my pal Ron above, I might have been highlighting them because of their proximity to my writing this.

(And then, off the top of my head, I came up with seeing Adam Lambert again, and meeting Giancarlo Stanton!!! OMG, to those both!) 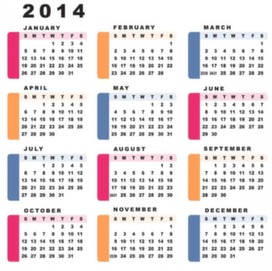 So, I went over the entire rest of this past year, day by day. Ah, the power of good record-keeping (which is rarely the case with me, except for appointment books, and the occasional journal entry.) And, I found at least one real highlight a month to share with you. And you know what? The four I just mentioned did, indeed, make the cut! They weren’t just because of the recentness.

So, in my ever-present quest to be grateful, and count my blessings, here are my personal highlights of 2014, in chronological order, (although those aforementioned quartet really are the top ones!) (And, if you’d like more deets on any of them, just put the main words in the “Search” box, because I’m pretty sure I wrote about most of them!) Here we go:

January–I started off the year with my pal Joanne Geffen’s party, which always gives us a Happy New Year right off the bat.

Then seeing Cirque du Soleil at the romantic Santa Monica Pier, (with Mr. X, no less!) continued that great 2014 feeling.

[Note: I know many of you were really expecting me to say my January 14th here, but this time it was not special at all, and was actually kind-of depressing.]

February—My favorite time in a restaurant all year was my belated birthday dinner with one of my all-time favorite friends, and personal idol, Angie Dickinson!!! I love that woman, who’s still as gorgeous as she’s always been!

The Beatles anniversary-of-coming-to-America party at the home of Debbie Supnik, who has known them, especially Paul McCartney, since they first came here!!! Her personal stories of the Fab Four were amazing!

And let’s not forget my favorite sporting event of all time, the Olympics! Yay!

March—I went to Vegas with my great East Coast friend, Lauren Bennett. In the past twenty years, I’ve rarely gone anywhere except New York, so it was a treat to go to Vegas with one of my most fun friends, if even for one night. What a bonus of living in LA to be able to do that so easily!

April and May—The last hurrah at my house in Brooklyn, before I had to sell it. [This is the only one that’s bittersweet, (rather than just sweet,) but it’s the end of more than one era, so it still counts as a highlight.]

June—The Etihad Airways party at the most awesome estate in Beverly Hills! It’s still the best event I’ve ever attended!

The San Antonio Spurs won the NBA championship! I love those mostly-old guys, and rooted for them all the way.

My perennial favorite party of any year, Fred Deni and Jim Crystal’s annual pre-Fourth of July fete. They feed us like kings, and then we can stand anywhere on or near their house, and watch the Santa Monica College fireworks. What can possibly be more fun, especially with Mr. X in attendance?!

July—Two of my favorite anniversaries—first with Mr. X on the 7th, and then with LA on the 27th.

August—I had so much fun at all the Emmys suites, especially because I got to introduce my newest, (and most fun,) contributing writer, Alice Farinas, to them!

September—It’s always a highlight of any year to get to spend a bit of time with my favorite singer of all time, Adam Lambert, but when I bumped into him at the Pasadena Playhouse production of Kiss Me Kate, both at intermission and again at the after-party, it was more special than ever because it had been a few years. I love that boy!!! And have since the second I heard the first note come out of his mouth in The Ten Commandments, The Musical at the Kodak Theatre a decade ago!

A major highlight of 2014 was the massive re-design of this very e-zine, ItsNotAboutMe.TV! My webmaster, Lou, did it all at the end of the month. It had been a long time coming, and all the positive reactions to it made it even more special. And guess what? We’re still not done! There are many more tweaks to come, so stay tuned for those. (And feel free to give me suggestions, in the Comments section below.)

October—Even though I’ve seen a lot of movies so far this year, (to vote for the SAG Awards in late January 2015,) St. Vincent was the movie of the year, to me. I loved seeing it in the beautiful Academy Theatre, and hearing Bill Murray speak after was icing on the cake!

And meeting Giancarlo Stanton the very next night (at the big Restoration Hardware party in West Hollywood) was this year’s OMG moment for me! (He later became the most monetarily-compensated athlete ever, in the history of the world! So, maybe some of you other big league players should look me up! I’m just sayin’.)

November—This was my juiciest month of the year, in general, because I had a fun event every night! And I finally got some opportunities to catch-up with a few old pals, which always helps my soul.

December—Which brings us back to the two events I mentioned at the beginning of this column! After reviewing all of 2014, these were definitely my favorite theatre pieces of the year: Sleeping Beauty and Her Winter Knight at the Pasadena Playhouse, and Angela Lansbury starring in Blithe Spirit at the Ahmanson Theatre. What a perfect ending to this, and any, year!

Before I went over my year to write this, I would have thought my year was not very good, mainly because of giving up my childhood home, and all the problems around that situation. But, this exercise really cheered me up, and even reminded me of why I always try to be grateful. So, I recommend doing it, to all of you. Just go through your appointment books, or journals, or diaries, (or even emails if you have to!,) and realize how it really is a wonderful life, especially at this time of year.