Thanksgiving isn’t the only time I give thanks; I try to do it daily, and always at year’s end! If it wasn’t an absolutely rotten year, I consider it to have been a great one! I’m constantly grateful for the one-of-a-kind Mr. X, my precious Clarence, my funny little mother, the patient Lou who manages this site, assorted nutty pals, relatively good health (knock on wood,) and YOU!!! I hope next year I can add…being my old skinny self again, though I’m not holding my breath. Well, maybe just for pictures or to close my jeans! 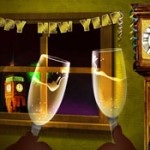 This is a still of Jacquie Lawson’s animated New Year’s card. You can join for the smallest fee ever at www.jacquielawson.com and send as many as you like. A word of caution: don’t just forward ones that you receive from others; they have personalized greetings, so they’ll have someone else’s name signed. Awk-ward!

I also want to welcome the latest additions to what my friends and I lovingly call my “guy collection,” which has gone through a lot of changes over the years. I have high hopes that I’ll always have sports-watching company in the future with the 2009 births of Benjamin Infield, Marcus Josselyn, and Noah West. Can’t wait to have fun kids around again (in five years from now, though,) since Ronnie Hazel, Terrance Jones, and Alex Hazel are now in their upper teens! How did that happen???

Speaking of my guy collection, the other day I came across some internet survey about which male celebrity you’d most like to kiss on New Year’s Eve. There were thirty-four choices and without even telling Mr. X who was on the list in general, I asked him who he thought was the overall #1 choice. He got it right immediately–Adam Lambert!!! I guess I’m not the only one who loves that boy! (Not Mr. X! All the people who voted for Adam on the survey! Mr. X thinks he’s amazing, too, though–I just didn’t mean that he wants to kiss him.)

Adam had actually been my #1 choice, too, until I looked at the whole list and saw…Maks! Maksim Chmerkovskiy, from Dancing With The Stars has ended the year as my #1 celebrity crush! I still don’t understand how that happened, because I used to hate him, but I’m sure he’s thrilled to hear it. I know Mr. X is thrilled because he always says I’m “too much woman for one man.” (He used to mean personality-wise, but now I think he just may be referring to my weight! Charming.)

Okay, here’s the last important thing of the year to impart to you guys, so pay attention. I’m pretty superstitious, especially about things that bring good luck, like always knocking on wood if I even think something good! (FYI–you can always knock on your head three times, if no wood is around.) There’s one ritual I do every New Year’s Day and another I do EVERY MONTH! At the risk of having you all think I’m completely bonkers (like you didn’t already?), I still want to share them with you, my loyal readers, hoping some of it works for you, too. (Unless you’re wishing something bad for ME. Bite my tongue! Which I did as I wrote that. How does Mr. X stand it???)

Okay, the special New Year’s trick is to eat black-eyed peas on January 1. They can be canned, frozen, fresh, whatever. (Is there even such a thing as fresh ones?) You can eat as many or few as you like, cold, hot, anyway. I just heat them up, throw on some seasoned salt, and choke-down about half a cup of those suckers. It’s once a year–you can stand it.

This one I kind-of hate to tell you, but I’m hoping you all deserve some good luck. Here goes: it’s called RABBIT. There are a couple of ways to do it. First up, the specific wish. On the last night of every month, as you drift-off to sleep, think of the wish you want to come true and don’t talk. In the morning, the first thing you must say is “Rabbit.”

The other way is for good luck that whole month, so I do them both. When you wake-up on the first of each month, kind-of pop-off the end of the bed (I just schooch down to the end with my butt and gently propel myself off) while saying “Rabbit” three times. (I’ve heard it as 1, 2, or 3 times, so I just go with 3 because that covers all bases.)

I know you guys are probably just scratching your heads over all this info, but trust me on this one. I’ve been doing it since I was a little girl and I really do believe in it. I used to put a sign by my clock to remind myself, but now I just put a little stuffed rabbit there instead. So much more fun to wake-up to than paper.

Try it and see. It’s worth a shot. Best of luck with it, and please let me know how it works-out for you.

And most importantly, I wish you all, and this whole crazy world, an absolutely wonderful 2010.