This is an interesting awards show in that the only people who choose the winners are other actors. Not other celebrities, mind you, but the masses of other, mostly unemployed, actors. I feel that so many thoughts come into play with these votes: who do you not want to get ahead of you, who was your rival coming-up and got successful while you’re still down in the trenches, who’s your actual pal/castmate/friend with benefits, who’s ass do you want to kiss, who do you want to be able to tell you voted for them should you meet them one day, perhaps even on a set. (Yeah, from my mouth to God’s ears, in my case.)

Every winner says this award means the most to them because it’s voted on by his or her peers. Yeah, right–I’m sure they wouldn’t rather get an Oscar!!! They’d trade in eight SAG awards for just one Oscar, and they know it.

I’m not a fan of the statuette being called “The Actor,” either. Kind-of pretentious. But I really hate that they say, “…by a female actor…” How affected can they get? Please just call us actresses because that’s what we are! The people who invented that term for these awards seems to think that male actors are the thing to be, and we’re just female versions of them. If not, why don’t they call the men “male actresses?” Come on.

Anyway, the whole shebang is a little weird because everyone wants to dress-up, but not too much, so they can save their best look for the Oscars just four weeks later. (This show is also just two weeks after the Golden Globes.) And everyone tries to speak better now that they’re “act-ors.” The whole thing is strange to me. But I’m grateful for this show because it means that we actors and actresses get to see tons of movies free, and better yet, in many cases, get to hear movie stars speak about their “process.” And find an occasional gem like Javier Bardem.

So, enough background; here are my quick impressions of the SAG Awards and attendant Red Carpet moments:

Keeping with my comments above, Steve Buscemi and his Boardwalk Empire cast won, I believe, because actors vote for bad-looking ones to give themselves hope! 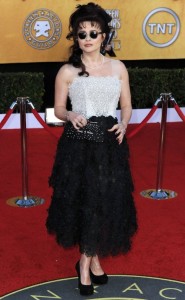 Regarding Helena Bonham-Carter: that chick can dress! Not.

I voted for Supporting Actress winner Melissa Leo because she deserved it, but I’ve been disappointed in her acceptance speeches. And, she didn’t even acknowledge her on-screen son, Christian Bale, when he tried to congratulate her! Strange.

Jon Hamm is so not funny, and he should stop trying to be.

James Franco is such an adorable, honest, charming guy. My admiration for him grows all the time.

There were certain presenters that I didn’t understand the presence of. Angle Harmon, Jason Bateman, Rosario Dawson, Josh Duhamel, and Donald Sutherland haven’t had any projects for years, have they? Why would they be there? Usually, it’s current stars, so I just have to ask: what’s up with that?

Of course I voted for the cast of Modern Family, which has no weak links, but when they won, they couldn’t come up with anything amusing to say!!! I guess it proves that comic actors aren’t necessarily funny without their writers. I love that Betty White won, even if people possibly voted for her because of her age. Ernest Borgnine was the only person there older than she! I love people respecting their elders, and only hope that all of us can grow-up to be like they are now. Mr. X once got to work with Betty and was in awe.

Speaking of Ernest Borgnine,when they showed the retrospective of his career, I was shocked that he still looks the same! Unbelievable. And, since he wasn’t attractive to begin with (probably the reason they gave him this award, because it goes along with my basic premise from the beginning of this column,) he’s actually gotten better-looking as an older man. [Note: I’m totally kidding about why he got the award. He 100% deserved it for his long and varied career]

And speaking of that tribute, Tim Conway’s introduction speech of Ernie may have been funny waaaaaay back in the day, but it just sat there now. Shame, because I had always heard that Tim was a riot back then.

But at least it was appropriate to have someone who worked with Ernest at his most famous intro-ing him at the SAGs. Usually, they come up with some hip and happening young actor to do the honors, which is just wrong. 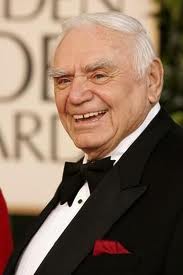 Last note on Mr. Borgnine–I, shamefully, had never thought to appreciate him before, until a recent event. I watch a lot of old movies, but was never attracted to his films, not even Marty. (It just looked too sad.) But, a couple of months ago, he was on the What’s Up With That segment of SNL, being one of the stars that the fake host ignores. All of the other celebs in that perennial skit sit there with looks of shock and disdain, which is what they’re supposed to do. But Ernie just had a big old grin on his face the entire time, and couldn’t help tapping his toes to Keenan Thompson’s character’s inane singing. (BTW–It’s the best bit on the current shows.) I immediately loved Ernest Borgnine for enjoying that skit so much! And his SAG speech was great–better than all the others.

They should have let Hugh Laurie win for dramatic TV actor because then at least we’d have had some entertainment! The rest of the speeches were duds. And why were they all thanking the teamsters? Was someone gonna get whacked if they didn’t?

Claire Danes looked so uncomfortable in her dress. She needed to stand-up straight (well, she always needs to do that,) and pull the top up! Christian Bale handled his speech very well. He made the real Dicky Eklund very comfortable about coming up on stage to surprise him, which Dicky should not have done, but supposedly was prodded to by Mark Wahlberg. I think we’re all just glad that Christian didn’t yell at him for ruining his concentration, if you know what I mean. [Note: I know his rant at a set-hand last year has been the butt of jokes since it happened, but, as an actress myself, I totally understand where he was coming from. I think all actors can.]

Colin Firth, winner of Best Actor for The King’s Speech, forgot to mention co-star Guy Pearce, who plays his brother, in his thanking of the cast! I thought for sure he’d rectify that when the whole cast came out again for their ensemble win. Strange, especially because he had lauded the guy so much when I saw them both speak after an industry screening. I guess this falls under the heading of “oh well.”

And lastly, as jokey as my musings might be, I always take voting on these awards very seriously, and make sure to see every performance that’s nominated. If I don’t, (which happens only in the TV categories,) I leave that section blank. And I think long and hard before I cast my vote. So, as amazing as Christian Bale was in The Fighter, and as much as I wanted him to get noticed for it, so we can all put his tirade on a set last year behind us, I just had to vote for John Hawkes in Winter’s Bone. And I saw that one on a little screen in my lap on a plane! So, how powerful must his performance have been on the big screen??? I didn’t even know he was an actor; I seriously thought he was some redneck guy they picked out of a country bar or something. He was chilling. I just hope that all this recognition gets him more and better acting gigs, like what Frozen River did for Melissa Leo a few years ago.