I’m still absorbing the shock of the L.A. Clippers trading their star, and former #1 draft pick, Blake Griffin, to the lowly Detroit Pistons on Monday. How is that even possible? This whole town is reeling. 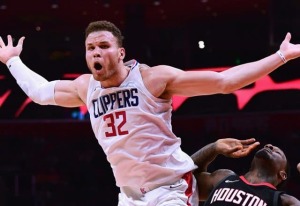 Blake Griffin, appearing to say, “WTF?” to his trade.

I don’t think that anyone saw it coming. He was their “franchise player,” for goodness sake! Who are the Clippers without Blake Griffin?!

All that being said, I’m not exactly a rabid fan of his because he’s had, how shall I put it, not the most exemplary behavior over the past few years. Blake is actually a far cry from that shy young guy I was sort-of the first to welcome to L.A. in 2009.

Yes, you heard that correctly. I do have an early Blake Griffin story. Here ‘tis: 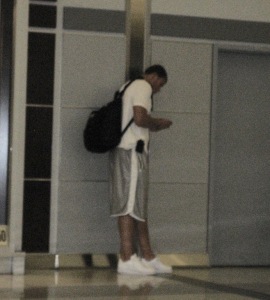 Blake Griffin at JFK in 2009. Photo by Karen Salkin.

In the summer of 2009, after a trip to New York to entertain my little mother, I arrived at my gate at JFK’s United Airlines for my return flight home to L.A. It turns-out that the airline neglected to call just a couple of us passengers on that scheduled flight, to let us know that the flight would be delayed for take-off. About two hours delayed!!!

So, I walked into a ghost town of a boarding area. The weird thing is that I’ve always whiled away my wait in the private lounge when I was flying Business (as I was that night) or First Class. But I just forgot to do so that day. And as I arrived, I spied a really tall, lost-looking young guy walking ahead of me. When we got to the snack counter, where I was right behind him, with no one else around, I asked, “Aren’t you Blake?” He said he was, and seemed so shy, and sort-of in a fog. And sort-of surprised that someone recognized him, especially in New York. (Of course, we were those two passengers whom United had not notified about the delay!) 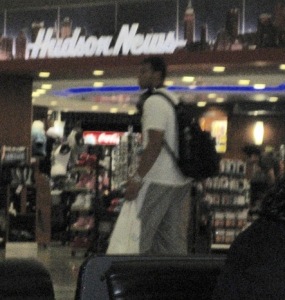 Blake Griffin at JFK in 2009. Photo by Karen Salkin.

I expressed surprise that no one was bothering him—after all, he had just been the #1 draft pick for all of professional basketball!!! That’s a really big deal, to you non-sports fans. He said that one or two people in front of the terminal had seemed to know who he is, but that was it.

We chatted for a bit. He seemed kind-of apprehensive about the near future. He was such a far cry from the confident, almost cocky guy that he is now. If we put the two personas together, of then and now, they would seem like Patty and Cathy on the old Patty Duke Show! (In case you’re not familiar with that classic television show, one’s demure and the other is the life of the party.) 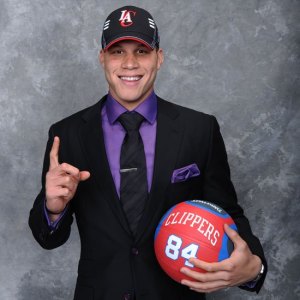 Blake Griffin, when he was drafted first in the 2009 NBA draft.

He asked if I go to the games, and I said that I occasionally did, and I’m sure I’d see him there. I told him that Michael Roth, one of the bigwigs at the Staples Center, where the Clippers play, is wonderful, and that he should look for Michael if he needs anything. My one regret is that I didn’t think to give him my card in case he needed anything because that may have made him feel better, to at least know one non-Clippers-related person in town. He seemed so fearful of the future.

And then, not wanting to glom onto him, I just walked away and sat down in the waiting area. In a bit, he sat down a few rows away from me. Since we were the only two people there, I kept wanting to go over and chat some more, to make him feel more welcome in my town, but he had ear buds in, so I didn’t want to bother him. But I did call a few guys back home, including Mr. X, and said, “Blake Griffin is on my plane!” But each one of them said, “Who?” I had to explain his new status in the world of basketball. 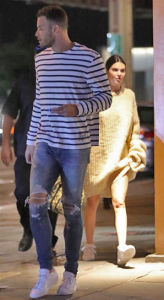 Boy, have times changed. Now everyone in L.A., and basketball, in general, knows the name “Blake Griffin.” But not always for the right reasons. He’s had a rash of injuries over his career. He had two children out-of-wedlock with a former college basketball player, (who previously had a baby with a pro quarterback in town.) He punched one of the team’s equipment managers, injuring his hand, which resulted in being unable to play for over a month. It’s always seemed to be something with him. Needless to say, the powers-that-be weren’t always thrilled with the guy’s behavior.

But outside of all of that, he was doing well again this season, despite injuring his knee and being out again for over a month. In his first game back at the end of the year, he helped the Clips beat their arch-nemeses, the L.A. Lakers. And he continued to do great from there. 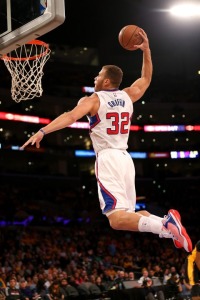 On top of that, he’s the second-leading scorer in franchise history. And the Clippers had recently re-signed Blake to a five-year, hundred seventy-three million dollar contract! So why in the world would they trade him now??? (And how did he not have a no-trade clause in there??? We all know he wanted to be a lifetime Clipper! How did his agent not insist on that being a part of the contract?!)

They’re not getting anyone special in return, except for maybe Avery Bradley, who was a stand-out on the Boston Celtics last season. I really like that guy, but player-and-star-power-wise, he’s no Blake Griffin.

So, I just hope that Blake, (and I!,) can get over this new development in his career. And that there will be someone at the airport in Detroit to warmly welcome him to his new city, as I was when he was on the way here to begin his NBA career.