Trending
You are at:Home»JUICY GOSSIP»JUICY GOSSIP/KAREN’S THOUGHTS: MY TIMES AT THE PLAYBOY MANSION
By Karen Salkin on October 2, 2017 · JUICY GOSSIP, KAREN'S THOUGHTS

MY TIMES AT THE PLAYBOY MANSION

Just as I began writing this, a publicist asked if I could share some of my memories of the Playboy Mansion with a writer for the Los Angeles Times!  I agreed, but with a bit of trepidation because what I had to say was less than complimentary.  And I was already using my words here, in my own e-zine.  But always eager to help-out a fellow journo, I semi-looked forward to the opportunity.  And then the timing didn’t work out to talk to that reporter, which is just as well, because now you all get the exclusive on it! 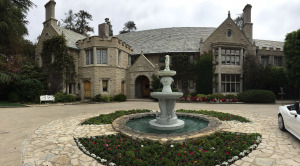 So, what follows are my private thoughts on my many times at the Playboy Mansion.  [Note: This is not one of my tributes to a deceased person I’ve known, in this case Hugh Hefner, because I was not a fan, and I can’t be phony.  So, it’s just a story instead, to at least commemorate his death.]

Just like when my mother died, the whole shock of it wasn’t just about losing her—it was the end of an era—no more constant trips to New York, no more thinking up ways to entertain my little mo all the time, no more house I grew-up in, no more seeing all my east coast buddies all the time. Half my life had changed forever.

And so it is for so many people with the recent death of Hugh Hefner—no more Playboy Mansion, no more big dinners and parties, no more mystery surrounding the legendary location. The real story on that crumbling edifice is about to come out. Everywhere! But here first!

I was a semi-regular there for a little bit about twenty years ago. But I had visited the Mansion a few times before then. 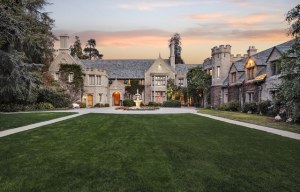 The long entrance from the gate to the front door of the Mansion.

The very first time I laid eyes on the Playboy Mansion up close and personal was when I had just returned from half a year living in Malta. I was due to be in a movie on that Mediterranean island, but I was in a rib-cracking car accident instead.  But one of the people I made friends with over there was Kate Feiffer, the daughter of playwright Jules Feiffer, so when he was having a party at the Mansion, Mr. X and I were included.

I put on my amazing Norma Kamali dress, which was basically a bunch of red strings with a shiny bikini bottom, and headed on over, so excited.  But even then, as a young girl, I was a bit disappointed in the dinginess of the place.  But I was thrilled to be there, in general, and felt that my introduction to the Playboy Mansion meant that I had arrived in LA!  And, when one of the bartenders recognized me, (even though this was before I started doing my television show, Karen’s Restaurant Revue, and thus, being somewhat famous,) that really cemented the deal for me!  (He had dated a short-lived pal of mine, and had asked me out behind her back, so he better have known it was me!)

My second visit kept-up the “red” theme; we were each required to have our photo taken on a red couch, which was placed outside for the occasion.  Anything went, in the attire category, but most of us were dressed-up.  I wouldn’t repeat my red Kamali, of course, but I had lots of scarlet in my wardrobe at the time, so I was all set. (As opposed to what color dresses are in my closet these days—black, to look thinner, and blue, to distract everyone away from the other parts of my anatomy that are not my eyes!)

After that night, Mr. X was done with the place forevermore.  I assumed that I was, as well, but then a few years later, at the height of my television popularity, I was invited back.  Repeatedly.  For Sunday “Dinner and a Movie” nights.  And I went.  Repeatedly.  Not for the company, (which was basically loathsome, of course,) and shockingly, not even for the food, which was almost as horrible as the creepy old men there.  You’ll never in a million years guess why I went. Ready? For the sound system in the screening room!!!  It was the best! 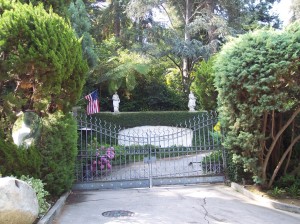 The entrance. The intercom is that “hole” in the rock on the left.

So, this is how those nights worked:  After we rolled up to the giant fake rock in front of the gate, upon which is a semi-hidden microphone that we state our names into, (which I still get a kick out of doing,) we were let in. And then we entered the moldy, smelly, run-down Playboy Mansion, by which I was actually repulsed.  Even though I was still young, skinny, and according to many, sexy, I always wore baggy almost-clown-like clothing because I didn’t want even one of those gross, old, far-from-gents to try to hang with me.  And guess what—they did not!  Not a one of them!  While most normal guys in this town thought I was cute no matter how I dressed, those disgusting perverts had eyes for only the near-naked tramps.  I loved it!  There was actually not even one person there with whom I was ever interested in speaking!  I realize now how sad that situation was.

Hefner never even knew I was there.  He was all about himself, and thinking he was all that.  He did join us for dinner, on occasion, but usually showed-up just in time for the film.  So, the rest of the assemblage had a giant group dinner, either in the dining room or the garden; I was always happy when it was outside, to avoid the “grandparents’ house smell.”  Very rarely there would be someone I knew and at least sort-of liked, such as James Caan and Art Metrano, who were both very nice and fatherly to me, since we had a mutual lovely movie star friend.  But that was it.  I just always made sure not to sit at a table with any super lowlives, such as the degenerate who ran something called Screw Magazine.  (I feel that I need to take a scalding hot shower now, for just typing that title!) 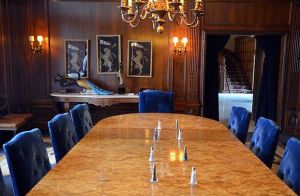 Then we moved into the “screening room.”  It was far from the traditional sense of the concept, which is a private mini-theatre.  No, this was just basically a living room, with mattresses and couches that were all revoltingly soiled, so that those aforementioned repugnant old men could canoodle with the young half-naked women.  There were just a couple of single chairs, and, no matter how uncomfortable they were, I always left dinner early to make sure I arrived in that room with time to claim one.

As soon as the movie was over, I was out of there. And that was that. Except for one Easter, when I was more than happy to join that fete! I love a good Easter E-word Hunt, and I knew this would be a phenomenal one. How could it not be when the e-words were hidden on the grounds of the Playboy Mansion?! But for me, it quickly devolved into an unfair contest. Being the competitor that I am, (and the all-around fun gal,) I wound-up finding the most e-words, of course. And let me tell you—it was thrilling.

But Hef didn’t really know me, except to say hi, (because he wasn’t the one who personally invited me there all the time—his minions did that task for him,) so he didn’t want me to win, because the prizes were big ones, like TVs! He wanted to give them to his close pals. So, he let couples and families combine their finds, and crowned one person in those groups as the individual winners, which I really was! It wasn’t fair, but them’s the breaks. Hugh Hefner was as creepy as his surroundings. 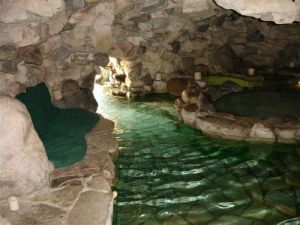 Which brings me back to finish describing the condition of the Mansion to you. I had always heard about the “grotto” and the “zoo,” etc. The zoo was just a bunch of smelly empty cages, but the grotto was at least pretty. There was blue water, and you swam into a closed-to-the-sun area. It was nice, but I felt even it was a tad foul, just because everything else was.

One more word on the ramshackle Mansion itself. There were a bunch of rooms with dirty shabby furniture, which was usually a mattress, a chair, and a small table on which stood a dim lamp and—get ready for it—a box of tissues!!! Not for if you sneezed, but if you had to wipe your hands (or anything else) after sex! It was all so odious that I can’t even portray it to you in all it’s full sleaze.

So, there you have it—an honest portrait of the Playboy Mansion. Sure, it might have been something else in its heyday, and that might have been fun to witness. And I have a feeling we’ll never see the likes of it again. But I hope that the new owners will fumigate the entire property, even before they tear it down, (which is what I’m predicting they will do. And soon!)

Here’s my penultimate note on the topic:  While looking for pictures of the Mansion on the internet, to accompany this story, I came upon this well-written, well-expressed article which I feel you all should read.  It’s an interesting take, and maybe part of the reason I did not like the man, whose house I was so frequent a guest at: www.elle.com/culture/a12638096/exactly-what-kind-of-sexual-revolution-did-hugh-hefner-inspire.  And it will explain why I couldn’t title this column Hugh Hefner, RIP.

And now, my very last note on this once-glorious estate: I just could not bring myself to publish pix of how bad it had gotten in that house. But if you are curious about it, here’s a good article to take a gander at: www.vice.com/en_us/article/dp4b8a/i-went-to-the-playboy-mansion-and-it-was-kinda-depressing.