I feel like I often ignore Father’s Day. Of course, part of it is that I haven’t had a father since I began this e-zine, so it’s not really in my consciousness.

Another part is that it just never seems to have the luster that Mother’s Day does. 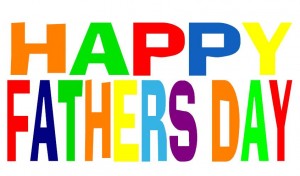 And growing up, there wasn’t much that my father wanted in the way of presents. All we ever got him seemed to be pistachio nuts! Now that I’m sort-of an adult myself, I realize that there might have been other gifts he’d like, but not even my mother seemed to be privy to them. She always got him Whitman’s Samplers because of a famous family story.

I just realized that I’ve never told it here before! I didn’t sit down to write this tale at all! I was just planning to say a few quick words, and then wish all fathers a happy day. But since I just mentioned it, I realize it’s a good Father’s Day story, so here it is:

My father was a little boy in Russia when his father went to the United States, with the plan to bring over his wife and son. My father was walking with his mother one day, when he was only four, when suddenly, his mom died right there, holding his hand.

He had to live with relatives for three long years, until his father could send for him. (I’m already tearing-up, from just that part of the saga.)

Finally, this young boy got sent off on his own, on a big ship to America. His relatives gave him a Whitman’s Sampler for the trip. My poor father had never had something as wonderful as a brightly-colored box of chocolates, and was thrilled!

But, being a generous young guy, (which continued throughout his life,) he went around the ship and offered everyone a piece first, before even thinking of taking one for himself. Alas, every single piece got gobbled-up by others, and he had none left for himself. 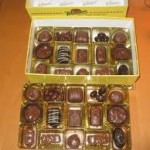 He went back to his quarters on the ship, (which was probably just a chair,) and went to throw the empty box away. As he tossed it, he heard something rattling around in there. Lo and behold, it was Whitman’s famous bottom layer!!! Having never had one before, he didn’t realize it was a double-decker box!

So, he wound-up with an entire half a box of chocolates for himself!

How wonderful is that story?! So, the most romantic things my parents ever did for each other is that my mother got always got him those boxes, for every occasion, and sometimes “just because.” And I can’t look at one without smiling. Although, trust me, I would have taken all my favorite pieces for myself first! On both layers!!!

So, to all the fathers out there celebrating this week-end, I wish you a memory as good as this one.