Trending
You are at:Home»GOSSIP»GOSSIP: HOW IS ADAM LEVINE THE SEXIEST MAN IN AMERICA???
By Karen Salkin on November 20, 2013 · GOSSIP

HOW IS ADAM LEVINE THE SEXIEST MAN IN AMERICA???

I’d like to see the people on People Magazine’s committee to choose each year’s “Sexiest Man Alive!” They must be one strange group to think that Adam Levine is sexy at all, let alone the sexiest man. Perhaps they just don’t know what sexy is.

I have nothing against Adam Levine. (As a matter of fact, back when I was doing my television show, Karen’s Restaurant Revue, I got a message from one of his relatives telling me that the whole family was fans of my show, so of course I’d like every member of that clan!) But there’s no way he’s sexy. 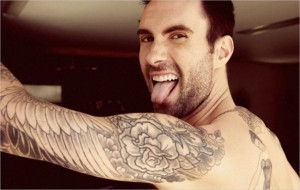 These are the things about him that make him not sexy in my opinion: he’s skinny, has a little head and a gross beard, his tattoos are disgusting, (I know that many females think that tattoos are sexy, but I believe they are in the minority, or creepy themselves, and either way, Adam has way too many of them,) he speech is a tad slurred and strange, and he has a high-ish Mickey Mouse speaking voice. And I’m sorry to say this, but I don’t even think he’s that talented musically! (He’s talented, but not as much as many others, and his music just doesn’t do anything for me.)

And the boy cannot dress. It’s just creepy to continuously go on national TV in basic T-shirts, which usually look a little grungy, to boot.

Yes, he’s been popular for the last several years for being a mentor on The Voice, and having some witty repartee with colleague Blake Shelton, but it’s usually Blake with the clever quips, which make him much sexier than Adam. He’d be a better candidate for the Sexiest Man title!

Speaking of which, just rolling out of bed this morning, I thought of a lot sexier man, just off the top of my head. (I’m using the term “sexier,” but really, to me, Adam Levine isn’t sexy at all, so any man who’s even a little bit sexy is, by definition, sexy-er.) Yes, musicians are often thought of as sexy, and some are, but on the whole, athletes, dancers, and actors are way sexier.

And often intelligent men and comedians are even sexier than those. And don’t forget about kind ones. A combination of a well-groomed man, who’s witty and intelligent and in shape, with no tattoos, is what I like best. For me, throw in a small earring and a bracelet, and that combo can’t be beat. (On a personal note, I just realized that two sentences ago, that’s the description of Mr. X, but he eschews all jewelry except for a watch. But his sexiness doesn’t need the adornment, so I’m okay with that. But, I swear, it wasn’t even thinking about him when I was writing this; I just noticed that description after I wrote it.)

Here’s my short list of candidates that are occurring to me as I write this:

And that’s just off the top of my head this morning! If I was sitting in a room for months, with a committee, I could come up with even more, of course.

When I was running hip-hop clubs a dozen years ago, at least a quarter of the regular guys around town who showed-up were sexier than Adam Levine!

People Magazine’s choice this year brought to mind a line that Cathy Moriarty’s character delivered in the film Raging Bull, one which Mr. X and I quote all the time. Robert DeNiro, as her husband, boxer Jake LaMotta, was in a jealous rage over something nice she had said about one of his opponents. As he was threatening her over it, she said of the guy, “I’m not saying good-looking, I’m saying popular.” And that’s what I say about the choice of Adam Levine as Sexiest Man Alive; he’s not sexy, he’s just popular.

What do you think of the choice? And of mine?!