Trending
You are at:Home»GOSSIP»GOSSIP: HAPPY ANNIVERSARY TO MR. X AND ME!
By Karen Salkin on July 6, 2012 · GOSSIP

HAPPY ANNIVERSARY TO MR. X AND ME!

Tomorrow is Mr. X and my anniversary. Again. We seem to be lasting longer than all the other Hollywood couples, (which actually isn’t that hard to do,) so yay us! We have so many stories associated with the date, July 7; most funny/mysterious, but all too long, or private, to recount here. 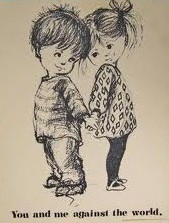 I remember this tiny greeting card from when I was little. Inside, it says, “They haven't got a chance.” Now, I finally know the meaning.

So, please allow me to take this occasion to laud my beloved beau one more time, especially in this most stressful of years. And, if you don’t already, you’ll understand just why my late mother always referred to him as her “favorite relative.”

As my mother’s pals can attest to, this guy did more for my mother over the years than almost anyone. And most from three thousand miles away! All she needed to do was pick up her phone and hear his voice saying, “Los Angeles calling,” and her day was made.

As much as my little mo looked forward to my three-or-four times a year visits, they couldn’t hold a candle to her excitement at the prospect of seeing Mr. X. And then he would spend every day entertaining her, from finding things to show her on his laptop, to singing and dancing for her, to buying her every item that could possibly make her life easier. But her favorite thing was when the two of them would gang up on me. She was in all her glory in those very many moments, trust me.

I’ll never be able to thank him enough for all he did for my mother, and for me when we lost her on Xmas. I couldn’t have made it this far without him. Even in the midst of his own incredible pain at the loss, he still managed to make everything easier for my entire family. And his closing eulogy at the funeral uplifted the entire assemblage. Everyone mentioned it to me after, saying they could see why Maybelle loved him so much. His honoring her, in ways both serious and amusing, was everything she deserved; she would have loved it. (And, just maybe, did.)

Now to happier topics about him.

I’ve written of some of his bon mots before, but just yesterday, he came up with a new instant classic. I‘m dealing with my broken back and he‘s living with a torn meniscus. (That’s in his knee, for those of you who are lucky enough to not be versed in orthopedic issues!) So, for the first time ever, we were both limping along, which gave me horrific visions of the (I hope) far-off future. I asked him, “What are we going to do when we’re in our eighties???” He answered, “I’m sure we’ll be in touch.” How could I not love the guy?

For more bon mots of those, (he’s got hundreds of them,) here’s the link to my anniversary column from two years ago: www.itsnotaboutme.tv/news/2010/07/07/gossip-happy-anniversary-to-mr-x-and-me

There’s so much more to say to, and about, him, but I’ll save those for another time.

So, Happy Anniversary, Mr. X. And, take that, TomKat!