The World Choreography Awards is one of my absolute favorite events of each year! I brought my friend Marc this year for the first time, and he likened it to the Oscars! But said it was even more fun.

Host Heather Morris in the center, with some of the dancers. Photo by Karen Salkin.

It was held in the Saban Theatre in Beverly Hills once again, but this time with a new host, Glee’s Heather Morris, who did a good job of moving the show along. (I would have enjoyed seeing her dance, too, though.) 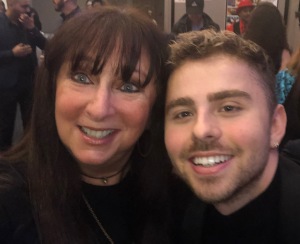 I didn’t write even one word of a note during the show because I was so riveted to the stage all night. There was one fascinating performance, video, presentation, or tribute after the other. And before, during intermission, and after, there were so many interesting attendees to chat with.

On that note, one of the hallmarks of this night is the magical mingling. Nowhere else do I see such an upbeat, happy assemblage as I do at the WCAs. Marc even commented that it was a good-looking crowd, with many younger people than we usually see at upscale events such as this one. And I really appreciate that most people dress-up for the occasion, as they should! The whole evening is like a fashion parade! I never know where to look first. (Or even second or third.) 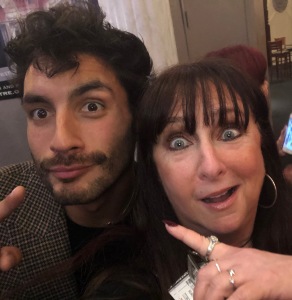 Robert Roldan and Karen Salkin. They were apparently both in shock to be hanging together! Photo by Karen Salkin.

I usually don’t approach people I’m a fan of, (even though everyone should, as long as it’s an appropriate situation, like not when they’re about to take a bite of food while out to dinner with their fam,) but the World Choreography Awards makes me comfortable enough to do so. And dancers are always the nicest people. So, when I saw World of Dance’s Michael Dameski, who should have won his season, (and everything else in life!,) I just had to tell him how incredible he is. (More on him in a moment.)

I also had to accost Robert Roldan of So You Think You Can Dance, to tell him that he’s the krump-dancing Mr. X’s favorite dancer, which is not easy to be in this crowded art field. I already loved him, too, of course, and after how nice he was that night, even moreso. 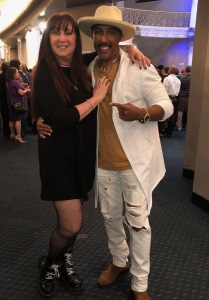 Karen Salkin with Marvin, one of her favorite former hip-hop club dancers. Photo by INAM staff.

And I always enjoy running into people who used to come to my nights at hip-hop clubs back in the day, as I always do at this event. It warms my heart that some of us are still hanging in with the dance community.

And that community makes the most enthusiastic audience ever. This particular one squealed with delight for every single nominee, performer, and even presenter! (I was tempted to run up on stage, just to get some love.) It’s all understandable because we were treated to many incredible moments along the way.

The show featured some of the most truly talented people in the world, beginning with presenter Rachel Bloom, the creator, writer, and star of Crazy Ex-Girlfriend. She is hands-down the absolute most multi-talented girl I’ve ever witnessed! So it was really fun to see her in person, even if she just talked. (She is preggers, after all.) 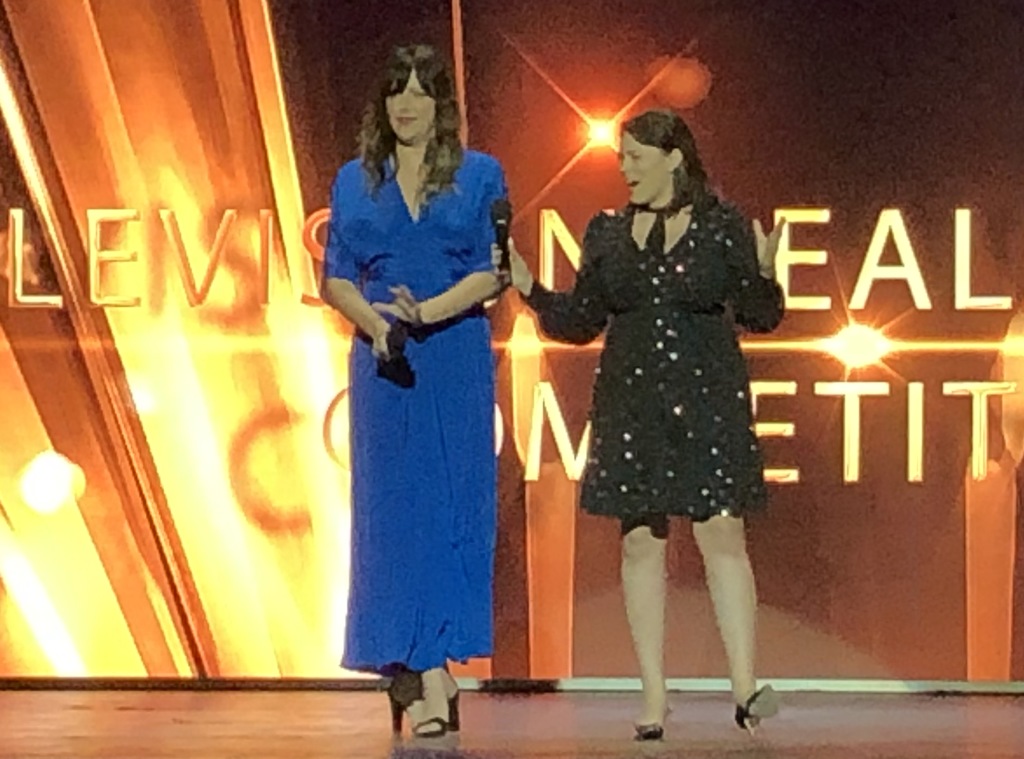 Rachel Bloom on the right with her show’s choreographer, Kathryn Burns. Photo by Karen Salkin.

And then there’s the ever-impressive Mark Ballas. Even though I’m sure that we all discovered him together as a pro on Dancing With The Stars, there’s so much more to him than that. Not only did I see him star in the Broadway musical Jersey Boys a couple of years ago, I also saw him play with his former band, Almost Amy, (with his fellow ballroom dancer and bestie, Derek Hough,) several years ago. But all of that paled by comparison to his stunning guitar performance at these World Choreography Awards. On top of all that, he was playing along to…a video in which he starred (with his wife in their singing duo, Alexander Jean, and accompanied by and dancing with, violinist Lindsey Stirling,) that he also won a Choreo for choreographing!!! It’s really astonishing how multi-talented that guy is.  He dances, choreographs, acts, sings, and plays a mean guitar. My talent is…talking!  (And let’s not forget–lauding the talents of others!) 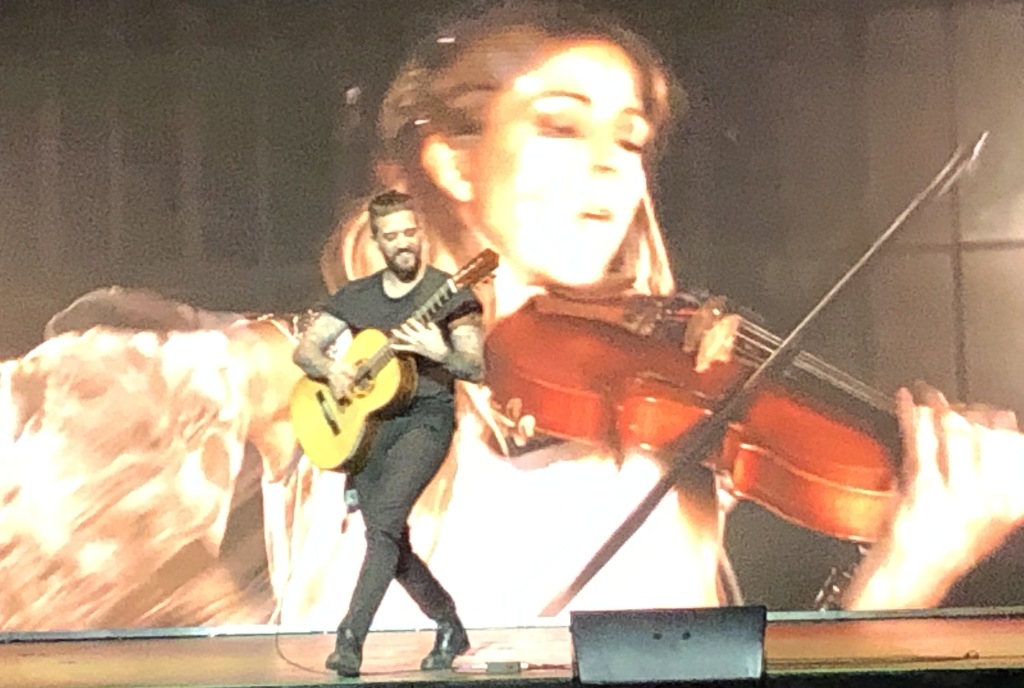 And I’m not done yet—another highlight was World Champion Latin dancers (and real-life couple) Karen Forcano and Ricardo Vega, the most truly amazing dynamic dance duo, who won a Choreo award earlier in the evening for their not-to-be-believed routines on last year’s World of Dance. And luckily for us, they repeated one of them on stage this night; that was five nights ago and my jaw has yet to close!!! As fantastic as they look on TV, they were downright dazzling in person. And I was shocked to see that Karen, (whose name I adore, of course,) is such a little tiny thing, too. 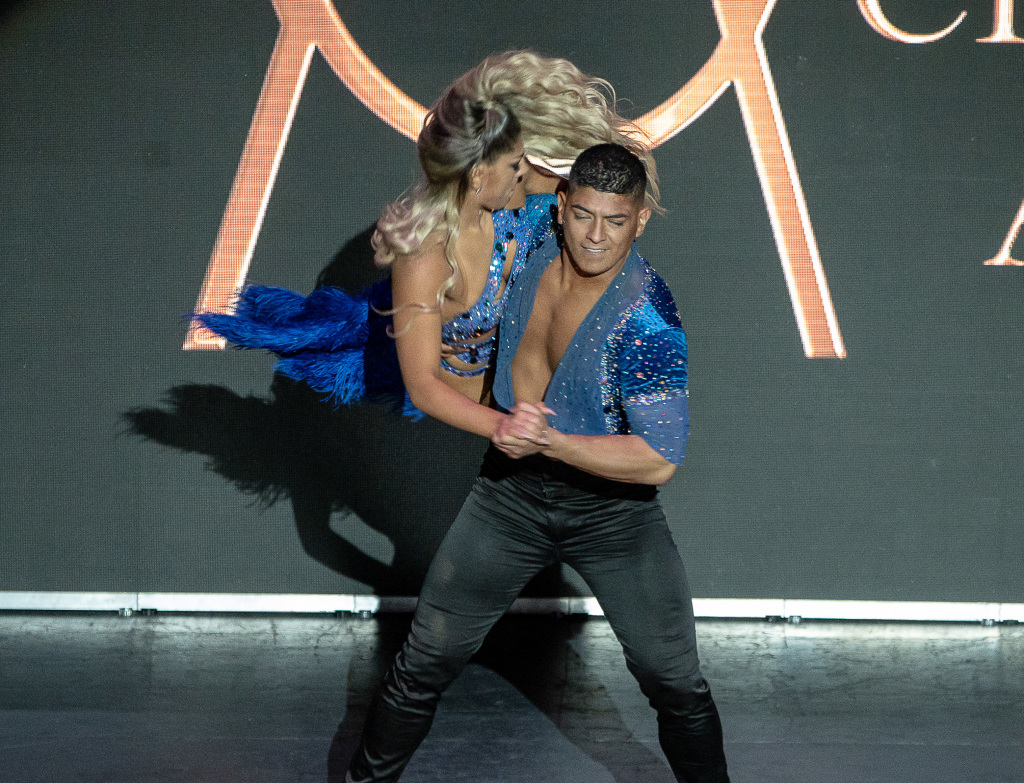 Karen Forcano and Ricardo Vega. Photo by Steve Sasaki, as is the one of Michael Dameski at the top of this page.

The act that beat them on Season Two of World of Dance is none other than the aforementioned My New Best Friend, Michael Dameski, whose number was another of the highlights of the World Choreography Awards this year. It was the calmest and quietest performance of the evening; you could have heard a pin drop. Except for the gasps, of course. I seriously almost could not breathe watching the beauty he was creating right before our eyes. (That’s Michael dancing in the picture at the top of this page.) 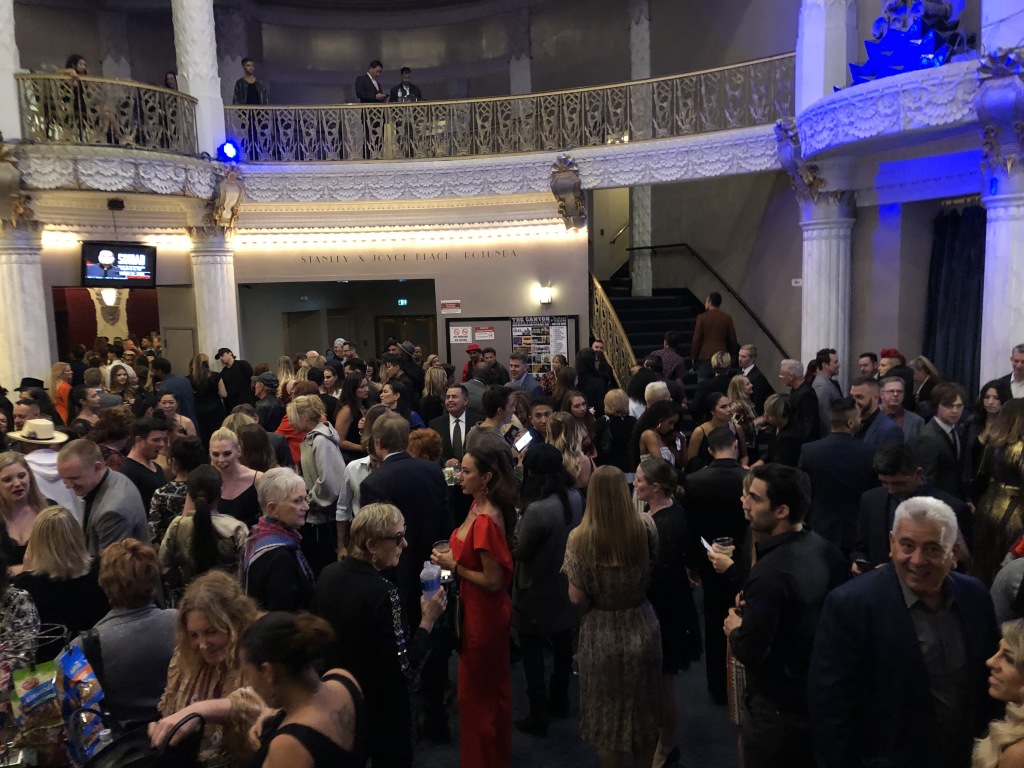 The mingling. Photo by Karen Salkin.

One of the most special moments of the night was the presentation of The Next Frontier of Dance Governance Honor to Glorya Kaufman, a wonderful Los Angeles philanthropist who has done so much for all aspects of dance over the years. That segment was introduced by legendary choreographer Anita Mann, who was rocking perhaps the hippest outfit of the night. Nigel Lythgoe told us about all of Glorya’s great work in one of his notoriously lengthy speeches. Only this time, that length was warranted because the list of Glorya’s kindnesses is looong! I appreciated her acceptance speech because it was just like listening to a lovely great-aunt from whom we can learn so much. 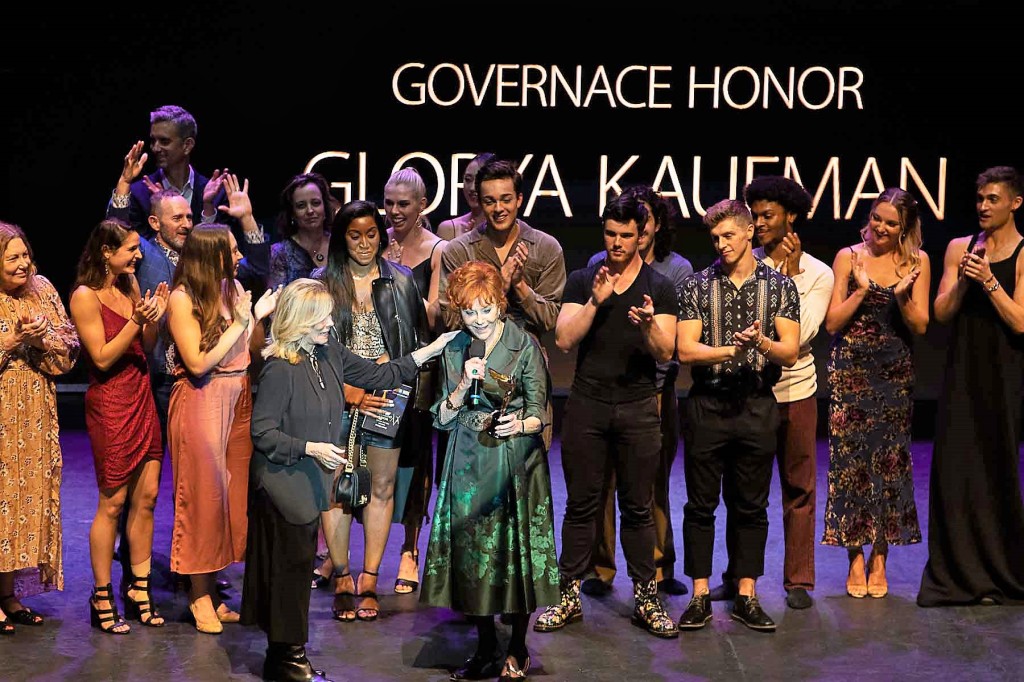 Glorya Kaufman in the green dress in the center, with Anita Mann next to her, in black. Photo by Steve Sasaki.

I really do have to give major kudos to, and thank, World Choreography Awards creator Allen Walls and his co-producer, Cheryl Baxter-Ratliff, for this once again marvelous-on-every-level event. I can’t imagine that putting this successful show together is an easy gig, but I’m sure they do it for the love of the dance, which is so admirable.

I promise you all that if you’re in Los Angeles next year at this time, you do not want to miss the 2020 World Choreography Awards. It’s open to the dance-loving public, so mark it on your Fall calendars now, and I hope to see you all there!

For all of this year’s winners, and to always keep the info on hand to learn about next year’s event, please check here: www.worldchoreographyawards.com.