Okay, guys, this is my last Celebrity Sightings column for 2010. Living in Los Angeles, with three month-long visits to New York each year, of course I spy celebs on just about a daily basis. But I give you just the highlights of them, and ones I think you’ll be interested to hear the whereabouts of, even though most of them were just pushing their upcoming films. And as usual, the most recent one is first. 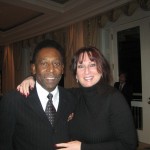 12/9/10 Brazilian soccer great Pele at a party at the Beverly Hills Hotel to introduce Invel, a line of active wear from a company in his homeland. After sitting through fans lining up for him, he actually got up to take pictures with me! He squeezed me tight, in a cute way, and when I thanked him, he took my hands, put them together, and kissed them in the most charming way.

12/4/10 My absolute new favorite person in the world, Javier Bardem, holding the audience enrapt during his post-screening Q-and-A for Biutiful, the absolute best film of the year. I always respected him as an actor, but I had no idea just what a superlative, in every way, man he is. Even with his self-confessed weird-looking head, I would be in love with him, if I weren’t already in love with Mr. X. And that’s saying something!

12/3/10 Choreographer extraordinaire Wade Robson getting his family out of the car at the Montana Avenue Holiday Open House in Santa Monica. He looks exactly as he does on TV.

12/2/10 Justin Timberlake, being one of the most boring post-screening speakers ever, at one for Social Network. I was shocked by how boring he was, when he’s so charming and funny on Saturday Night Live.

But he did have one interesting thing to say, and the scene was really fascinating to me to witness. Here’s why: Justin was talking about how great the film’s use of music was. He was describing how intense it was at one point and said that it made the scene so exciting, “like the bank robbery scene in Heat.” And, sitting right next to me, was Ray Buktenica, the actor who played the bank manager who got punched-out by Robert DeNiro in that very scene! I felt like I was in with the in-crowd at that one!

12/2/10 Ian Anthony Dale, the handsome Asian actor in The Event, leaving the Arclight Theatre in Hollywood just as I was entering. He must have known how annoying I am!

12/1/10 Jake Gyllenhaal, being charming after a special screening of the worse-than-awful Love And Other Drugs on the Fox lot. It was nice that he took time off his tour of coffee shops with Taylor Swift to be there!