I had not realized how long it’s been since I published one of my Celeb Sightings columns! So I’m making up for that lack by making this a long one. 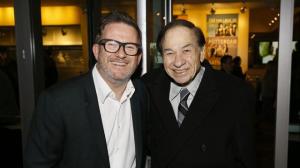 February was a juicy month, followed by a three-week dearth of celeb sightings. (Maybe winter was too cold, even in sunny Los Angeles, for them to go out much. Or, more accurately, too cold for me to go out!) But then it picks up again in the middle of March, and gets good from there.

So let’s do some Spring Cleaning and get right to them:

2/6/19  Legendary Disney composer Richard Sherman at the Ahmanson Theatre in downtown LA for the opening night of Matthew Bourne’s gorgeous ballet, Cinderella. I bumped into Matthew on the way in, and he was excited to tell me that our mutual friend, Richard, was already inside. I still cannot believe that I actually know those two talented icons!!! (Here’s my review of that wonderful dance: itsnotaboutme.tv/news/dancetheatre-matthew-bournes-cinderella.)

2/8/19  This was interesting—the only two celebs who were in attendance on the opening night of Witness Uganda at the Wallis in Beverly Hills were Leslie Odom, Jr. and Megan Hilty. I couldn’t imagine what their connection was, but it turns-out that not only had I forgotten that this duo had starred as besties on the musical TV show Smash, but they also went to college together! So, perhaps they’re real-life besties, as well. (You can read all about that sort-of real life musical right here:  itsnotaboutme.tv/news/theatre-witness-uganda.) 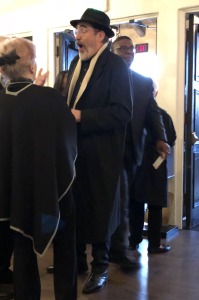 2/10/19  Alfred Molina chatting up a storm in the lobby of the Pasadena Playhouse on opening night of the musical Ragtime. I give him, (and all of us, actually,) credit for coming out in the rain that night. (Here’s my review of that revival:  itsnotaboutme.tv/news/theatre-ragtime-the-musical.) 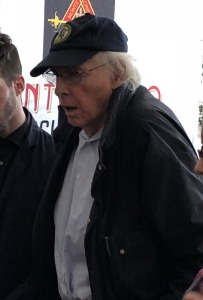 2/21/19  One-time Oscar-nominee Bruce Dern at Doris Bergman’s pre-Oscars luncheon and gifting suite in West Hollywood. I had lunch with him at this same event last year, so I was shocked to see him using a walker this time. I hope it’s just temporary, especially because I know he’s a runner. But I always love a person who still goes out and lives life despite setbacks. So, good on ya, Bruce! (For everything else that went on there, click here: itsnotaboutme.tv/news/gifting-lounge-doris-bergmans-2019-valentine-romance-oscar-style-lounge-party.) 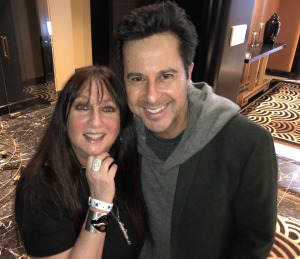 2/22/19  I was thrilled to bump right into adorable actor, Jonathan Silverman, at Rafi’s Gift Suite in Beverly Hills. Jonathan and I are old pals, who had not seen each other in a long while, so this was a really fun reunion. (And who else did I see there?  Click here to find-out: itsnotaboutme.tv/news/gifting-lounge-rafis-oscars-2019-gift-lounge.) 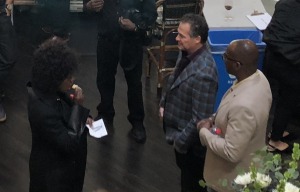 2/23/19  Viola Davis and her hubby at the GBK Gift Lounge in Beverly Hills. I loved her giant curly hair, but I don’t know how I recognized her without her nose running, (as it does in just about every role she’s ever done!!!) (You can read about the whole event right here:  itsnotaboutme.tv/news/gifting-lounge-gbks-pre-oscars-gift-lounge-2019.) 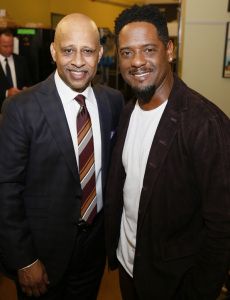 3/13/19  The nicest guy in show biz, Blair Underwood, leaving the theatre on opening night of Lackawanna Blues at the Mark Taper Forum. I had hung-out with him and his wife once before, so I wanted to say hi, but I didn’t want to inconvenience the friend I brought to the show (because I knew we would have a long wait at the valet.) So I didn’t greet Blair, but now I sort-of wish I had. (You can read all about that worthwhile show here: itsnotaboutme.tv/news/theatre-lackawanna-blues.)

3/15/19  This is a fun one. I had an amusing convo with hip-hop violinist Lindsey Stirling at the after-party for the first night of the dance festival, Moves at the Montalban in Hollywood. I told her this story: A few months ago, I was at an event where an artist did a watercolor portrait of me. She started with big blue eyes, so I was happy. For a minute. But as she went on, it looked less and less like me. When Mr. X saw it the next morning, he asked, “What’s this?” I answered, “A portrait!,” and then without skipping a beat, he asked, “Of whom???” After we laughed a bit, he told me that it looks more like Lindsey Stirling than me!  So one would think that we would have just put it away somewhere, but not anyone who knows us. Since then, we keep hiding it for the other one to discover in amusing places. Lindsey and her pals loved that we do that! But that’s why we recognized her right away—because she looks just like the portrait of me! (You can read about the entire inaugural dance festival right here:  itsnotaboutme.tv/news/dance-moves-at-the-montalban.) 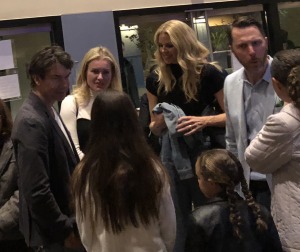 3/22/19  Married actors Rebecca Romjin and Jerry O’Connell so far out of town that I wasn’t even sure if it was them at first! But there they were, in Thousand Oaks, hanging-out in the lobby of the Fred Kavli Theatre at intermission of the opening night of Matilda the Musical. And they looked exactly like themselves.  And even more amazingly, the couple they were with were even taller than giants Jerry and Rebecca!!! (Here’s my review of that weird show: itsnotaboutme.tv/news/theatre-matilda-the-musical.)

3/27/19  Jodie Sweetin walking in the lobby with a child at intermission of Cirque du Soleil’s show Corteo at the Forum in Inglewood. I wouldn’t usually recognize her (because I’m not familiar with her, except for the few weeks she spent on Dancing With The Stars a few years ago,) but her face has been in the news recently because she’s a cast-mate of disgraced Fuller House actress, Lori Laughlin, who’s an idiot who spent half a million dollars to get her dumb daughter into college. And not even a prestigious one! (Here’s my review of that magical circus show:  itsnotaboutme.tv/news/theatrelive-production-cirque-du-soleils-corteo.) 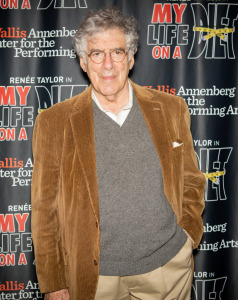 4/6/19  This one was a juicy, old school night. The opening night of Renee Taylor’s one-woman show, My Life on a Diet, at the Wallis in Beverly Hills, featured many of her show biz pals. She herself had been part of the cast of The Nanny, and in the audience were Sharon Gless (half of Cagney and Lacey,) Cindy Williams, (half of Laverne and Shirley,) and married actors Paula Prentiss and Richard Benjamin, who are each a half of their own Hollywood duo! But the biggest star there was Elliott Gould, who’s also my pal, so he’s half of our fun friendship! [Note: That’s Sharon Gless with Karen Salkin in the big pic at the top of the page.  Photo by Marc Winer.] (Renee’s show is now going on tour, so you might like to read my review of it right here:  itsnotaboutme.tv/news/theatre-my-life-on-a-diet.)

Nicole Richie. Why would she choose to wear this outfit to a classy opening night, where everybody was dressed-up?! Or anywhere, actually! (And get a load of that rude sticking-up hair-do! Did she have no clue that someone would be sitting behind her?!)

4/14/19  Oscar winners Reese Witherspoon and Marcia Gay Harden, (although not together,) at the opening night of the absolute worst show I’ve ever seen, Tiny Beautiful Things, at the Pasadena Playhouse. What a waste of time that was! Speaking of time, Nicole Richie showed-up twenty minutes after it began, and rather than being polite to the rest of the audience by just sitting in the back, she and the guy she was with chose to instead inconvenience everyone by climbing over half their row to get to their middle seats. But in this case, they were the smart ones because they didn’t have to sit through this entire snoozefest! (It was so bad, I decided not to waste one more second of my life on it, so I passed on writing a review.)

4/17/19  Jeanine Mason, who not only was the winner on Season 5 of So You Think You Can Dance but is now starring on the CW show, Roswell, New Mexico, at opening night of Falsettos at the Ahmanson Theatre in downtown LA. (In case you’re curious, here’s my review of that musical:  itsnotaboutme.tv/news/theatre-falsettos.)

4/27/19  Michael Trevino, who plays Dr. Kyle Valenti on the above-mentioned Roswell, New Mexico, at the after-party for a weird show he was starring in in Santa Monica. He’s actually the one who told me that Roswell had been renewed by the CW. (Here’s my review of that play he was doing:  itsnotaboutme.tv/news/theatre-crime-and-punishment.)

5/2/19  Legendary film director Peter Bogdonavich being honored at the LA Jewish Film Festival in Beverly Hills. Although he looked pretty frail, he spoke really well and shared some interesting show biz stories with the assemblage.

5/6/19  Don Cheadle ordering a vegan hot dog from a food vendor at the George Lopez Celebrity Golf Classic in Toluca Lake. He’s so much shorter and more slight than I would have ever imagined! And right after that, George Lopez came right by me, driving his own golf cart! So I double-dipped on Celeb Sightings that day!