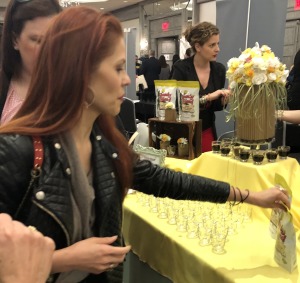 This past month was such a juicy one for Celeb Sightings that I had to let you know about all of them before we get into another month. They began right off the bat this year, on New Year’s Day!

So let’s hurry and get started:

1/1/19  This was such a fun one that I wish I had gotten a pic of it!  But it was at a private brunch at someone’s home in Playa Vista, so I didn’t want to intrude on anyone.  It was a reunion of television series regulars Ray Buktenica and Paul Michael Glaser, who starred together back in the day in the TV movie, Wait Till Your Mother Gets Home.  I loved listening in on their confab about those fun times. 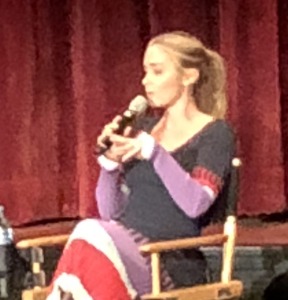 1/4/19  Dancing With The Stars pro Anna Trebunskaya, Green Book’s Linda Cardellini, and rapper Soulja Boy, having fun at the Secret Room Events Golden Globe Gifting Lounge in Century City, (although not together.) (If you missed my write-up of all that fun, you can still read about it right here: itsnotaboutme.tv/news/gifting-lounge-secret-room-events-style-lounge-in-honor-of-the-2019-golden-globes.)

1/5/19  Emily Blunt speaking after an industry screening of her film Mary Poppins Returns at Disney Studio in Burbank.  She was very appreciative of the standing ovation we gave her. 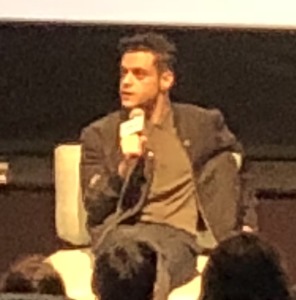 1/8/19  Rami Malek, who had just won a Golden Globe two days before, speaking after a big screening of the film he won for, Bohemian Rhapsody, in West L.A. 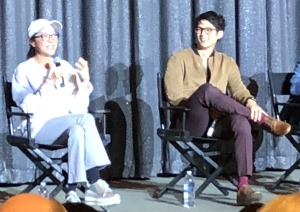 1/10/19  Michelle Yeoh and Harry Shum, Jr. doing the Q-and-A after a screening of Crazy Rich Asians in West Hollywood.  It was weird because Harry is on screen only about two seconds at the very end of the film, (during the credits even!,) yet he’s involved in so much publicity for that film.  That is, indeed, crazy! 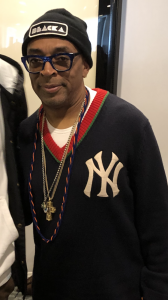 1/11/19  I bumped right into Edward James Olmos at the Van Nuys DMV, of all places!  (I’ll tell you all about my getting-my-new-drivers-license-pic shenanigans in my next YouTube video.  You won’t believe it!  Or maybe, actually, you will!)

P 1/12/19  Spike Lee, John David Washington, Adam Driver, and Topher Grace speaking after an industry screening of their film, BlacKkKlansman, in West Hollywood.  You’ll never guess which one of those men was the only entertaining one.  Ready?  It was…Topher!  He was actually a riot.  The others were a snoozefest, especially Adam.  But Spike was great afterwards, mingling at the after-party and taking pix with just about everyone who asked, some even pretty rudely. [Note: That big photo at the top of this page, taken by Karen Salkin, is of Spike Lee high-fiving John David Washington and Adam Driver, with Topher Grace right behind him.] 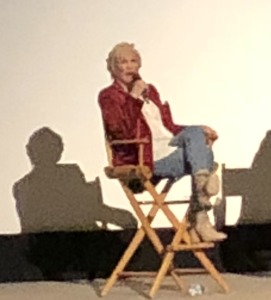 1/12/19  Glenn Close speaking (very charmingly) after a screening of her film, The Wife, in West Hollywood.  (Yes, you read that right—I did go to two screenings of major motion pictures in one day…and at the same venue!  Oysh.  In two different outfits with two different pals! With a brief stop at home in-between to change. I’m tired just thinking about it.) 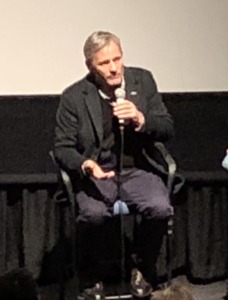 1/14/19  What a wonderful birthday gift to me!  After a screening in West LA of my new favorite film of the year, Green Book, star Viggo Mortensen spoke.  Delightfully, I might add. 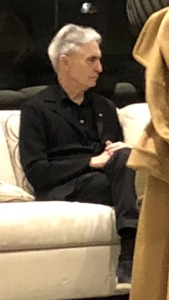 1/15/19  Two famous Davids, Arquette and Steinberg, at a screening of a short film presentation in Beverly Hills. The former is in the production, but I could not for the life of me figure-out what the latter was doing there. (And probably he me!)

1/16/19  Current TV show stars Eric McCormick (of Will and Grace) and Liza Weil (of How To Get Away With Murder) at the opening night of the play Linda Vista at the Mark Taper Forum in downtown L.A. (Here’s my review of that still-running show: itsnotaboutme.tv/news/theatre-linda-vista.) 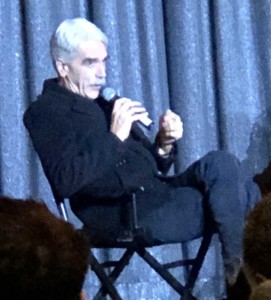 1/17/19  Sam Elliott doing the Q-and-A after a late-season screening of A Star is Born, in West Hollywood. He was entertaining enough, but I still don’t get why women of a certain age have always been so gaga over him. (See what I did there? Gaga—A Star Is Born?) 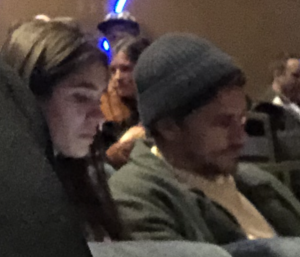 James Franco, with his girlfriend to his right. They’re so connected, right? Photo by INAM staff.

1/23/19  I saved the best for last. (Really only because it happened last.) I bumped right into James Franco and his young girlfriend at the box office at The Wallis in Beverly Hills on opening night of their new presentation, An Inspector Calls.  And then they wound-up sitting right behind Mr. X and me!  But they left before the after-party.  I had assumed he was friends with someone in the cast, but his early exit made me think I was wrong. (The show is currently running, so here’s my review, in case you missed it: itsnotaboutme.tv/news/theatre-linda-vista.)

With the Oscars and Grammys coming up later this month, with all the attendant fetes and gifting suites, along with several opening nights, February holds some promise for even more excellent Celeb Sightings. I’m looking forward to sharing my discoveries with all of you in the near future!