There were several juicy celeb sightings at the beginning of my recent stay in New York, but after that, it was slim pickins there. But it picked-up as soon as I got back to LA.

So, as with all things between the two coasts, (in my humble opinion,) Los Angeles won the Celeb Sightings war, in volume. But, I must admit, nothing beat the one I not only “sighted” in NYC on October 18, but met and chatted with a few times! OMG! Read on. [Note: The first three below are from NY, and the rest were in LA.] 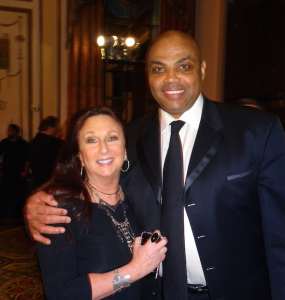 Karen Salkin (the extreme heat is what happened to her hair that day) and Charles Barkley. But look at the size of Charles’ hand! It’s bigger than Karen’s whole head! Photo by Lauren Clarke-Bennett.

10/13/16  Young model Bella Hadid at Cipriani 42nd Street, for the Global Lyme Alliance event, which was beautifully designed by Lawrence Scott, who donated his services to the cause.  If ever I had a wedding, he’s who I would want!

10/18/16  Okay, kiddies—this is the one I’m still fainting over! Charles Barkley! OMG! It was at the Broadcasting and Cable Hall of Fame event at the gorgeous Waldorf Astoria in midtown. I also chatted with Charle’s fellow basketball commentator, Kenny Smith, and recently-out-of-work talk show host, Larry Wilmore. (You can read about the entire evening here: itsnotaboutme.tv/news/new-yorktelevisionevent-broadcasting-cable-hall-of-fame-dinner.) 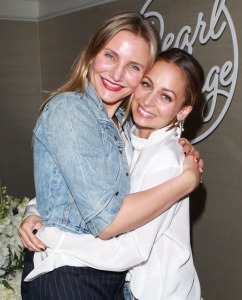 10/20/16  After seeing Don Lemon at the above-mentioned event just two nights before, I ran into him again in front of Carnegie Hall!  No one famous was performing that night, but the outside was buzzing.

11/4/16 Back in LA, Emma Stone spoke after the first industry screening of the annoying LaLaLand in Burbank. How that movie is getting rave reviews, and being nominated for awards, (outside of the Razzies, which it deserves in every category,) is beyond me.

P 11/5/16 Nicole Richie and Cameron Diaz speaking at Nicole’s women’s empowerment conference, Pearl xChange, at the London Hotel in Beverly Hills.  It was fun to see the sisters-in-law interacting for the crowd. (You can read all about it here: itsnotaboutme.tv/news/event-pearl-xchange-conference-2016.) 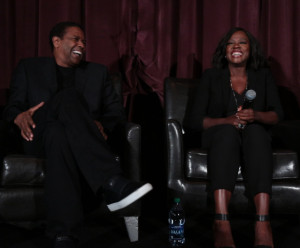 Denzel Washington and the Queen of Snotty Crying, Viola Davis.

11/5/16 At the first industry screening of Fences, (in one of the few real movie theatres left in town, in Westwood Village,) before its Christmas Day release, the entire cast, most notably Denzel Washington and Viola Davis, did a major Q-and-A afterwards.

11/9/16  Michael Shannon and Aaron Taylor-Johnson speaking after a West LA screening of their very confusing but beautifully shot (and cast) new film, Nocturnal Animals.  I loved it when no-nonsense Michael told the crowd that Aaron’s very evil rapist character is “the Donald Trump of the film.”  At least Hollywood, for the most part, got the election right! (A lot of good that does us, though.)

11/9/16  Later that same day, Michael Keaton spoke in West Hollywood, after an industry screening of The Founder, the film about Ray Croc, of McDonald’s fame.  I hope that Michael is okay because he was slurring the whole time.  He was doing that in the movie, too, but I had assumed that that was a character choice. 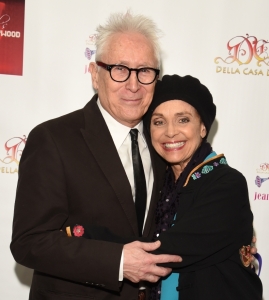 11/13/16 Very cute Ryan Reynolds at an industry screening of his film Deadpool in Century City.  Until then, I had no idea that he was involved in this project for years!  It was actually his idea to make it into a movie to begin with! (Did you guess who that was at the top of the page?  You are correct if you said Ryan Reynolds.  And just look at those muscles!  Photo by Karen Salkin.)

11/14/16 The most fun I had all month, (and possibly all year!,) was witnessing this fun mini-reunion of the sitcom, Rhoda!!!  Valerie Harper and Ray Buktenica looked thrilled to reunite at a party in Beverly Hills for artist Mario AC Della Casa.  I heard Valerie tell Ray that he made the whole night for her!  They both did that for me. (You can read my review of the whole party, including the fun story about Ray that Valerie shared with me, here: itsnotaboutme.tv/news/partyart-mario-ac-della-casa-party.) 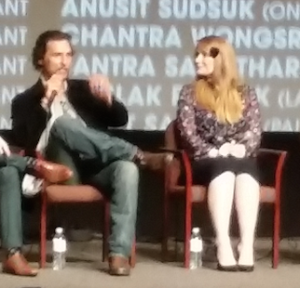 11/16/16  TV star Peter Gallagher was the lone celeb at the opening night of The Beauty Queen of Leenane at the Mark Taper Forum in DTLA. I don’t know why that was the case. (You can read my review of the play here: itsnotaboutme.tv/news/theatre-the-beauty-queen-of-leenane.)

11/17/16 Matthew McConaughey and Bryce Dallas Howard speaking after a screening in West Hollywood of their awful new film, Gold.  It’s a major turkey, just in time for Thanksgiving! 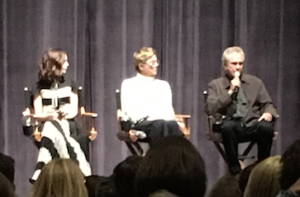 11/19/16 This was a fun one: after the first industry screening of Rules Don’t Apply, in Century City, a Q-and-A was done by Lily Collins, Annette Benning, and none other than the star/director Warren Beatty, who is almost as elusive as Howard Hughes, whom he plays in the film.

11/20/16 In Century City, a Q-and-A was done by almost the entire main cast of what I consider to be the best movie of the year, (so far,) Hidden Figures. There was Taraji P. Henson, Octavia Spencer, Janelle Monae, and Jim Parsons.  As you can imagine with this crew, it was a very entertaining conversation! 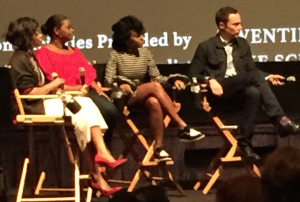 12/5/16 Even though I do not like Mark Wahlberg as a person, (because he blinded a man when he was a young criminal, and, to the best of my knowledge, has never apologized, although he did ask for a pardon!,) he was entertaining at the Q-and-A after an industry screening of his new film about the Boston Marathon bombing, Patriots Day, alongside prolific director Peter Berg and most of the rest of the main cast.