This has been a very juicy couple of months, in the “spotting celebrities” category. I’ve spied everyone from Oscar-nominated actors to comedians to big TV stars to music business icons. There’s even a major current Olympian. So, let’s get to this pretty fun group already! 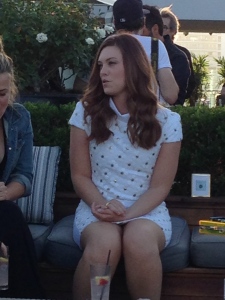 3/26/15 Ted Lange, George Chakiris, Freda Payne, and Margaret Avery all either giving or accepting awards at the Los Angeles Women’s Festival opening night gala at the Electric Lodge in Venice.  (You can read my full review of the event here: itsnotaboutme.tv/news/theatreevent-los-angeles-womens-theatre-festival-gala.)

3/31/15 This isn’t a celeb to anybody but us CW fans, but I was at a a party with Kaitlyn Black, who plays Annabeth on the sadly just-cancelled Hart of Dixie.  (It’s not a celebrity when you have to look up her name.)  Still, since she’s on my favorite show, I was happy to see her in person on the rooftop of the London Hotel in West Hollywood.  And out of the tiny town of Bluebell!!! 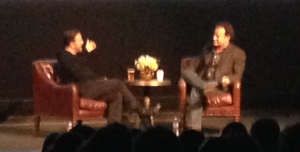 Ricky Gervais, on the right. Photo by Karen Salkin.

4/9/15 Ricky Gervais at Paramount Studios in Hollywood, speaking after a private screening of the series finale of his Netflix show, Derek.  I had never even heard of it before!  He was charming, but the guy interviewing him was brutal.  Ricky became my hero a few days later when he spoke out against that evil woman who killed an innocent giraffe.  I wanted to read exactly what he said about it, but his comments are attached to the picture, and I just had to scroll past it with haste, before I threw-up. 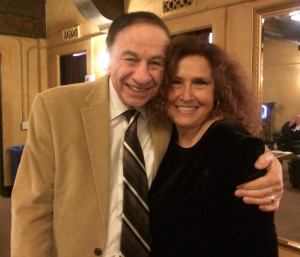 4/11/15 Castle star Nathan Fillion walking into the Hollywood Roosevelt Hotel in–guess what?–Hollywood!  (Duh.)  He was on his way to GBK’s suite for the MTV Movie Awards, that I had just left.

4/20/15  Here’s an interesting gang for you–Renee Zellweger, Melissa Manchester, Petula Clark, Jason Ritter, iconic songwriter Richard Sherman, and many more onstage at the Pasadena Playhouse, (and at the after-party,) performing for a very worthy cause, the Golden West Chapter of  the ALS Association.  (If you missed my review of this year’s One Starry Night, please read it here, so you won’t miss the event next year:  itsnotaboutme.tv/news/theatrecharityevent-one-starry-night-from-broadway-to-hollywood.) 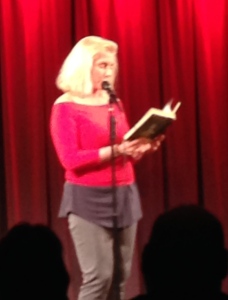 4/28/15  The occasion was heart-breaking, but Paul Ryan would be happy for me to share that Academy Award-nominated Sally Kirkland was at his funeral in the Hollywood Hills. He had planned it himself, so, despite many of our tears, it was a very heartwarming ceremony.

4/29/15  Debbie Harry being obnoxious at a stupid, mean-spirited event at The Grammys Museum.  (Don’t ask.)  She made everyone who was waiting for the elevator, (including me,) change to another one, so she could go up one floor by herself!!!  Let me tell you–I’ve been on elevators with Wilt Chamberlain, Sandra Bullock, Neil Simon, and other bigger celebs than Debbie, and not one of them even considered asking anyone to clear out for them!  What a creepy move on her part. 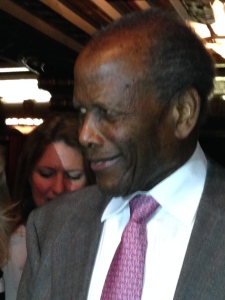 4/30/15 At least three generations were represented at Motown, The Musical opening at the Pantages Theatre in Hollywood.  There was everyone from Smokey Robinson and Motown founder Berry Gordy, Jr. to the younger generation of artists, led by Redfoo, to the rarely-seen-in-person acting legend, Sidney Poitier.  OMG!  To it all!  (If you missed it, you can read my glowing review of the fabulous show here: itsnotaboutme.tv/news/theatre-motown-the-musical.)

5/11/15  Susan Sarandon, speaking at an industry event at the theatre that’s billed as being “at The Ace Hotel,” but is really the very old United Artists theatre next door.  She was as charming, down-to-the-earth, and honest as you’d imagine.  (And the desserts weren’t bad, either.) 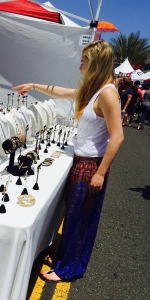 Gracie Gold, shopping at the fair. Photo by INAM staff.

5/14/15  Miss America 1955 Lee Meriwether at the opening night of the play Boxes at Theatre West in the San Fernando Valley.  What a beautiful woman she still is!

5/16/15  Saturday Night Fever’s Donna Pescow at the opening of Shakespeare’s Comedy of Errors at T.U. Studios in North Hollywood.  I had interviewed her on a really stupid shopping show I was hosting in the late ’90s, and I swear–she looked younger now!

5/24/15 Olympic figure skater, Gracie Gold, who’s also been a National Champion, all by her lonesome at the Hermosa Beach Fiesta. She was dressed sort-of beachy, as the rest of the crowd was, but she stood out because of her bright red lipstick, which was a tad weird for the occasion. (But maybe she was wearing it for the same reason I was rocking blue and red nails–to honor Memorial Day.)