April and May were strange months in New York in, (as my late show business manager used to say,) every which what way. And during the previous five weeks, I spied only one celebrity in L.A., and that was the day before I left town! Then I never saw any in New York until Mother’s Day, almost five weeks later! (Well, since I rarely left my house there because I was working so hard on cleaning-out my Brooklyn home, I didn’t have much opportunity because, let’s face it, few celebrities are making it through there!) But that one Mother’s Day sighting was so special that it will take-up most of this space, anyway.

The action picked-up after I had been back in Los Angeles for about a month. So, the west coast wins once again!

4/8/14 Robert Townsend at the Beverly Glen Center.  A woman pulled up in the one handicapped spot in front of the pharmacy, and got out, leaving Townsend in the car, texting away the whole time.  They didn’t say a word to each other as she got in or out.  It was sort-of strange, on all fronts.  No biggie, but odd. 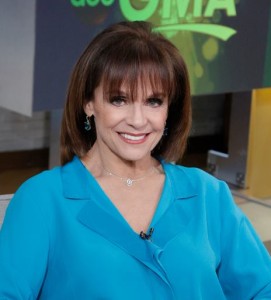 Valerie Harper on GMA, looking as beautiful as ever, two days after I bumped into her in Manhattan.

5/11/14 This was the best celeb sighting ever to me. It was Mother’s Day and I was down in the dumps in New York. I was working my butt off emptying out my precious little mother’s house in Brooklyn. (Actually, both are precious–my mother and my house!) I was happy to be there in the house with her spirit on that Mom’s Day, and I actually planned the trip that way–to spend my last Mother’s Day in her house. But the enormity of the whole process got to me. I had no help whatsoever from anyone else in my family, (there’s a shock, eh?,) and it was too much. My friend Lauren, who’s the kindest person to begin with, offered to drive in from the Hamptons with her husband, pick me up in Brooklyn, take me to the city for Mother’s Day dinner right near their house, and then drive me back and stay overnight so I wouldn’t be alone. Have you ever heard of such a thing?! I readily accepted, and the exact timing of the situation could not have been more perfect. Here’s why: she let me out of the car in front of her building so I could walk her dog for a minute before dinner. As I was doing so, who should walk right by me than two people I’m mad about–Valerie Harper and her lovely husband Tony Cacciotti! I hadn’t seen them since she started going through her health issues last year, and now here they were, right in front of Lauren’s house! It was a Mother’s Day miracle! And remembering her brave battle with cancer put into perspective what I had been going through in New York. I really do think that that happy encounter helped me get through those next three horrendous days until I left my childhood home for the last time. 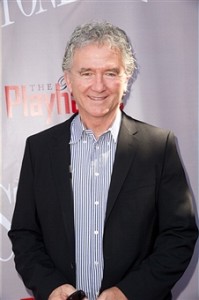 6/8/14 What a mix of celebs at the opening night of Stoneface at the Pasadena Playhouse!  I guess star French Stewart is popular with his show biz peers!  Among the attending luminaries were Two and a Half Men star Jon Cryer, venerable film director Taylor Hackford, and Dallas‘ perennial nice guy, Patrick Duffy. I had no idea that Patrick was so tall!!!  Handsome man.

6/10/14 Quincy Jones, Buzz Aldrin, (with whom I sat!,) Linda Thompson (the ex of Elvis, Bruce Jenner, and David Foster,) Australian singer Dannii Minogue, and Homeland‘s Shaun Toub at the the Etihad Airways Gala at Beverly House, featuring a wonderful performance by none other than Harry Connick, Jr. It turned-out to be the most magnificent party ever! (If you missed my write-up of this amazing event the other day, you can read the deets here: itsnotaboutme.tv/news/event-etihad-airways-gala.)