The end-of-year celebrity sightings were an odd assortment; it was slim pickins in November for my entire month in the Big Apple, so only the first sighting comes from the east coast this time. But things picked-up the second I returned to LA, right in the airport! Like ships passing in the night, as I arrived, the second guy on this list was leaving. Check them both out, and, of course, the others, as well. [Note: the last sighting listed is actually the first one of the new year. Glad it got off to a celebrity start right away!] [Bigger note!: I wrote the 12/18/12 sighting way back then, when no one even knew they were seeing each other, but didn’t have time to publish it until today. And yesterday, they announced their engagement! Who knew that a cup of coffee would lead to a life-time commitment?!] 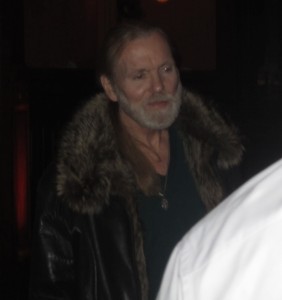 Gregg Allman arriving to perform at the Waxman dinner in NYC. Photo by Karen Salkin.

11/15/12 Gregg Allman and Peter Frampton entering the Park Avenue Armory in NYC, prior to performing for the concert portion of the Samuel Waxman Dinner. They looked so fragile, especially Gregg, but, boy, were they powerhouses on-stage!!!

12/6/12 Dancing With The Stars pro dancer Val Chmerkovskiy walking towards me at LAX at around noon. Judging by the fuzzy ear-flaps on his winter cap, his head looked like he was headed to New York, but his tee-shirt with no jacket left a tad of confusion. He looks exactly like he does on TV, btw!

12/9/12 Castle‘s Susan Sullivan and MSNBC stalwart Lawrence O’Donnell at the opening night of Other Desert Cities at the Mark Taper Forum. (If you missed my review of the play, you can check it out here: www.itsnotaboutme.tv/news/2012/12/11/theatre-other-desert-cities.) 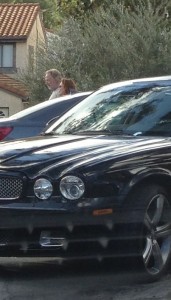 It's tiny, but there are Timothy Busfield and Melissa Gilbert at the Glen Center. Photo by a mysterious photog.

12/18/12 At the Beverly Glen Center, (which people often refer to as the “Top of the Glen,”) Melissa Gilbert was spotted with Timothey Busfield, getting their caffeine fix at Starbucks.

12/19/12 Original Star Trek head Vulcan, Leonard Nimoy, having dinner next to me at Il Piccolino in West Hollywood. Without my glasses on, he actually looked kind-of young! I think it’s due to his very full head of hair.

1/3/13 Former Laker, GM of the Los Angeles Clippers, and 2006 NBA Executive of the Year, Elgin Baylor, waiting for his really nice car at the valet at a financial building in Century City. At first, I thought he was the valet, because he was the only one at the valet station and he was counting out a lot of dollar bills. I was wondering why he was letting me sit there without taking my car! But when I got a closer look, I realized who it was. He can take my car anytime, anywhere he wants to!