So, after a month in New York, the first month of 2012 turned out to be a juicy one for celebrity sightings back home in L.A. Let’s get right to them.

1/6/12 My first celeb sighting was my old pal, Bruce Vilanche, as he was arriving in New York and Mr. X and I were finally leaving after a horrific month-long stay, during which time we lost my precious little mother. It was good to run into someone she thought was so funny to remind me to try to laugh again. (By the way, he loved the airline, and we were not fond of it at all, even in the supposedly better seats.) 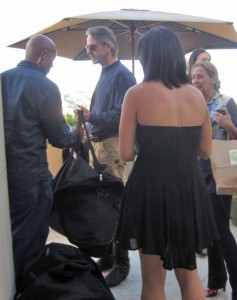 Photo of Jeremy Irons at the GBK Suite by Karen Salkin.

1/13/12 I really didn’t notice many celebs at this year’s first crop of suites, but I did spy Kevin Dillon, of Entourage fame, at the Secret Room at the SLS Hotel in Beverly Hills. Then, just down the street, in front of the L’Ermitage Hotel, standing there like a little girl waiting for a friend, was Mayim Bialik. She looked so much better in person than as a nerd supreme on the hilarious Big Bang Theory, that I wasn’t even sure it was she at first, until she followed me up to the GBK suite, where her party finally arrived. Later, on the roof, at the actual event, I ran into Oscar winner Jeremy Irons. That was an exciting sighting. 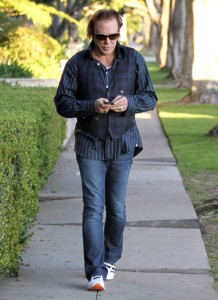 1/13/12 As I left the Golden Globes gifting suite at the L’Ermitage Hotel on Burton Way in Beverly Hills, and walked a few steps down the block to my car, there was only one other person walking down the street, towards me. It was Mickey Rourke! Texting all way, I might add. I was shocked to see, and happy to report, that he looks about a zillion times better in person than in the media. He looked slim in his tight jeans, and actually kind-of normal.

1/14/12 I cancelled my birthday party this year, even though it was on a Saturday for the first time in about a bazillion years, because of my recent sadness. [Note: see the first sighting above for deets, if you want them.] So Mr. X and I chose to spend a low-key day on the Third Street Promenade in Santa Monica, along with the hoi polloi. There was a strange assemblage of people on one corner, and it was to be a part of a television show that I haven’t heard of since the ’90s, The People’s Court, with host Harvey Levin, of TMZ fame, hosting them. He’s much shorter than I would have thought, if I had ever thought about him at all, which I haven’t.

1/14/12 So I chose Craig’s in West Hollywood for my Bday dinner this year, and was seated near two old school theatre world celebs I used to know–married-forever couple Carole Cook and Tom Troupe. About to sit near us was local news reporter Joel Grover, who’s the guy who broke the story about dirty restaurants in LA, thus forcing the letter system into existence. So, I’m assuming that Craig’s is on the A-list, if Joel’s eating here. Happy Birthday to me! 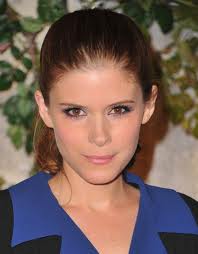 1/25/12 Kate Mara having lunch on the patio near me at Lemonade on Beverly Boulevard. I had never been there before, and hated it, [my scathing review in the next couple of weeks,] but she and an animated older woman seemed to be enjoying their lunch, leaving me to ask, “Why?”

1/27/12 Eric Idle at just a regular person night (as opposed to opening night, which I guess we both missed this time,) at the Mark Taper Forum to see the excellent Clybourne Park. He was hanging with a group of pals right near me in the lobby at halftime.