I’ll be spending the rest of the year in New York with my little mother, (and Mr. X, too, of course!,) so this is my last Celeb Sightings column of the year. I promise to bring you all the ones from December at the beginning of next year. 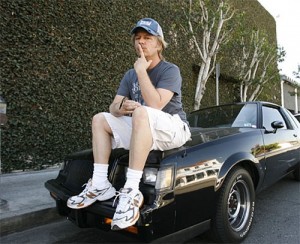 David Spade atop his car. Photo from Driverside website.

10/14/11 David Spade driving behind us on Pico Blvd. at lunchtime. His car was really weird. So weird that I didn’t think it could be a celebrity, and that perhaps we were wrong. And then I realized that because it was so mysterious, it was perfect for a celeb! It was a souped-up boxy old car; jet black, no markings, strange tires, tinted windows. It was kind-of like my little mo’s old American vehicle, that a Triple A guy dubbed “the workhorse.” But I don’t think that that’s what David had in mind when he picked his car out. [Note: I’m so proud of myself!; courtesy of website Driverside, I confirmed that his car is indeed akin to my mother’s! They’re both Buicks, with the workhorse being a 1997 LeSabre, and David’s being an ’87 Grand National.]

10/21/11 Dennis Farina at a Big Apple screening of his new film, The Last Rites of Joe May. None of the other screenings that I’ve attended in New York have had the q-and-a after, so I was shocked to see how dreadful the moderator, Daniel Holloway from Backstage Magazine, was. I think Mr. Farina was a tad surprised himself!

10/27/11 Chuck Shumer, United States Senator from New York, and Zachary Quinto, the Star Trek actor who recently “came out,” on my plane from New York to LA. They were in First Class and I was one row behind them in Main Cabin Select. (Note: not that I’m ever snobby, but I did hate not flying in a bigger airlines’ Business Class.) I bumped into Mr. Shumer a couple of times outside the rest room, (I guess we Brooklyn natives have small bladders,) and he gave me warm smiles; he just seemed so pleasant. I really wanted to talk to him about Brooklyn, and him having my little mo as a teacher in Junior High, but that wasn’t the place. Zachary was rocking a skull cap and black-rimmed hip glasses and was the epitome of hip. I don’t think he ever uttered a word to anyone, but rather just read and stared off into space, looking either confused or just deep in thought. 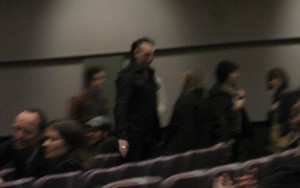 That's Marilyn Manson moving up the aisle faster than we could capture him.

11/10/11 Tilda Swinton, Julia Ormond, and Marilyn Manson at a Beverly Hills screening of Tilda’s already award-winning film, We Need To Talk About Kevin. Interestingly, Marilyn was with a dead-ringer for his now-off girlfriend, Evan Rachel Wood. 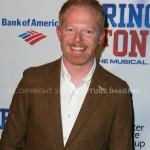 11/11/11 The opening night of Bring It On, The Musical at the Ahmanson Theatre had celebs for every age category: Sally Struthers for the seniors, Kent Boyd, (the runner-up on last season’s So You Think You Dance, with whom I actually spent a day earlier this year) for the juniors, and Modern Family‘s Jesse Tyler Ferguson and Dancing With The Stars pro Kym Johnson for the in-betweens. One extra bit of gossip: Kym’s date was with a much older gent, not the younger guy I used to see her around town with. 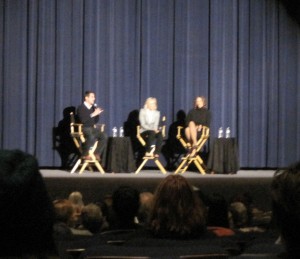 Glenn Close, center, with co-star Janet McTeer on the right.

11/12/11 Glenn Close speaking after at an industry screening of her new period film, Albert Nobbs. In comparison with how masculine she looked on the screen, she looked a little less manly in-person. But only a little, mind you.

11/12/11 Desperate Housewives‘ Kathryn Joosten with Kendra Wilkinson and Hank Baskett appearing for a great cause, lung cancer awareness, at The Soho Project’s Masquerade at the London Hotel in West Hollywood. 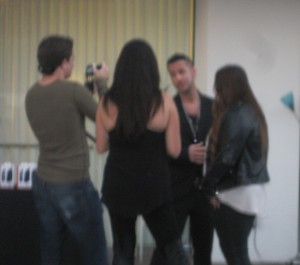 The Situation, facing us.

11/18/11 I’m not a fan of either, but it was still kind-of interesting to see Soulja Boy (of the Crank That dance) and The (moronic, full-of-himself) Situation at GBK’s suite for the American Music Awards, held at Beverly Hills’ SLS Hotel. The Situation looked as goony in person as he does on TV!

12/3/12 Brenda Vaccaro in Beverly Hills, at the office of our mutual eye doc, John Hofbauer. We went to the ladies room together and she amiably broke down our Screen Actors Guild health insurance plan for me because I’m a nescient in that category. (And oh so many others!) I complimented her on her absolutely gorgeous skin, (seriously, she has the skin of a twenty-year-old!,) and she said, “That’s my mother.” I think that’s what I’m going to start saying when people tell me I’m funny.

12/2/12 This turned out to be a juicy day for celebrity sightings because, after the one above during the day, I not only spied two more at night, but we literally had to squeeze by each other at a crowded regular person event! We were all at the Montana Avenue Holiday Walk in Santa Monica, and even though it’s always a lot of fun, I was surprised that anyone really famous would put themselves out there like that. First I bumped into Laura Dern, who looked lovely, by the way, with her daughter, as she was leaving a crowded boutique. Right after that encounter, outside the store, Meredith Baxter Birney went by me, holding hands with her girlfriend, and looking as freaked-out by the crowd as I was!

12/7/11 Viola Davis being honored as a Woman of Style at the Divine Design Gala at the Beverly Hilton. Our mutual great pal, and favorite acting teacher, Dr. William Hutchinson of Rhode Island College, had asked me to say hi to her for him, and I was the only one in her proximity zone when she walked-in, but I never like to bug anyone who’s entering or exiting an event, so I figured I’d wait till later, which, of course, never came. But she was a vision in white, while most of us wore black, as usual!