As many of you know by now, I spent most of the summer sleeping in medical facilities in New York with my little mother, who’s doing a million times better now, by the way. [Note: I’m working on a primer for anyone else who finds themselves in that position, which I hope that none of you ever do.] So, naturally, there was not a lot of time for celebrity sightings, except when my sister and I walked down the boardwalk in Coney Island, (where my mother and I were staying,) to see Aretha Franklin in concert on August 5th.

Once it turned September, though, all that changed and my Celeb Sightings are back in full swing. Here are the highlights of the month: 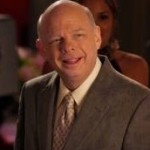 9/8/11 On the way home from Fashion’s Night Out in New York’s Meatpacking District with my friend, Betsy, while waiting at a red light in Lower Manhattan, far away from the madding crowds, we spied Gossip Girl‘s Wallace Shawn just waiting to cross the street with a woman I assume to be his spouse. Being major gossip girls ourselves, Betsy couldn’t believe she was seeing him just standing there, like a normal person.

9/14/11 While not a celebrity herself, Jill Smoller, the sports agent for Serena Williams and Kevin Garnett, who was very visible at the recent US Open filling in for her uppity client when the rest of the final eight girls were protesting having to play in too wet conditions, was on the plane back to L.A. with us. I was surprised she was joining me in Business Class and not up there in First. Maybe Serena isn’t as generous as she tries to make out that she is. I’m just sayin’. 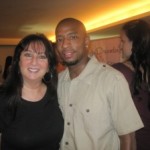 9/15/11 I was thrilled to run into a former cast mate of mine, Antwon Tanner, at the Secret Room Emmys Suite at the L’Ermitage Hotel in Beverly Hills. When we co-starred in the movie Brothers In Arms a few years ago, he was the only actor who was nice to me on-set. The hair and make-up people had made me look even worse than I thought possible, when they were really supposed to make me look like the fancy, rich Mayor’s Wife in this nonsensical western, so the rest of the guys basically ignored me. Until the premiere, that is, when I was able to look like myself. (And you guys thought Charlize Theron looked bad in Monster!!! She’s got nothing on me!) I’m glad to report that Antwon is just as darling as he was back then. 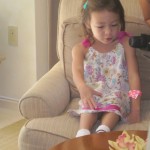 9/15/11 Not yet even a known working actress when she also made an appearance at the Secret Room Suite, (see above,) four-year-old Aubrey Anderson-Emmons was still getting a bit of attention because she’s so tiny and cute. She had just joined the cast of Modern Family this season, as the age-advanced Lily, the adopted daughter of Cam and Mitchell, and thus has been instantly thrust into the spotlight. And FYI—she’s much better-looking in person that she’s coming across on TV. (I know, I know—that may be a weird thing to say about a four-year-old, but she is an actress, dontcha know.)

9/16/11 Mel Brooks was lunching al fresco at a happening eatery on Canon Drive in Beverly Hills with a gaggle of cronies. I really dislike the place, on oh so many levels, so I’m not naming it. But it was good to see Mel out and smiling again after having a really rough go of it the last few years since losing his beloved wife, Anne Bancroft, in 2005.

9/17/11 While the GBK suites are known for attracting many celebs, I spied three with whom I’m really familiar during my time at their Emmys Lounge at the W Hollywood: Robert Morse, (who’s now on Mad Men, though he’ll always be J. Pierpont Finch to me,) Archie Punjabi of The Good Wife, and Glee‘s female football coach, Dot-Marie Jones.

9/23/11 While there was many a celebrity at the Macy’s Passport Presents Glamorama fashion show at the Orpheum Theater in downtown Los Angeles, my two favorites were Ceelo Green on-stage, with whom I chatted in the parking lot post-party, and fabulous figure skater and fashionista Johnny Weir in the audience, whom I was thrilled to also get to talk to after not having seen each other since the days of the late Champions On Ice. (And let me tell you, Johnny’s one guy who calls when he says he’s going to!!!) Also spotted: John Hamm and Jennifer Love Hewitt, though not together. You can read more of my thoughts on the event here: https://www.itsnotaboutme.tv/news/2011/09/28/fashion-event-macys-passport-presents-glamorama-2011/ 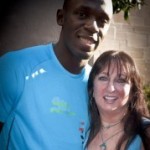 9/27/11 I finished out the month with a bang—the best celebrity athlete I’ve seen, and met(!), in quite awhile. Usain Bolt, the fastest man in the world. He was absolutely darling and even understood the Patois that I spoke with him. You can read the whole story here: https://www.itsnotaboutme.tv/news/2011/09/30/sports-meeting-usain-bolt/