Trending
You are at:Home»BREAKING NEWS»BREAKING NEWS/CELEBRITY GOSSIP/KAREN’S RANTS: WHAT IS THERE TO BE DONE ABOUT WILL SMITH?
By Karen Salkin on March 29, 2022 · BREAKING NEWS, GOSSIP, KAREN'S RANTS

WHAT IS THERE TO BE DONE ABOUT WILL SMITH?

There’s soooo much to say about this year’s strange Oscars, and I was planning to say it all right now. 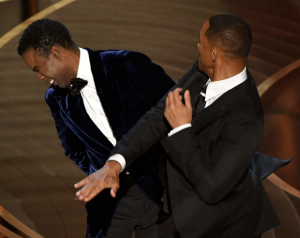 The slap heard ’round the world!

But Will Smith ruined so much for so many with his selfish thuggishness, (including me, by making double the work for me in these past two days,) that I have to postpone my entire show review until tomorrow, to address just his insanity in this article.

He dragged the Oscars down to street level with his oh-soooo classless display. I think that just about everyone else in the world knows that you don’t street-brawl on live TV, ever.

In case you don’t know what happened at Sunday night’s Oscars, (which seems impossible,) presenter Chris Rock made a joke about Jada Pinkett-Smith’s shaved head. He said, “Jada, I love ya. G.I. Jane 2, can’t wait to see it,” referencing the 1997 film where Demi Moore shaved her head. 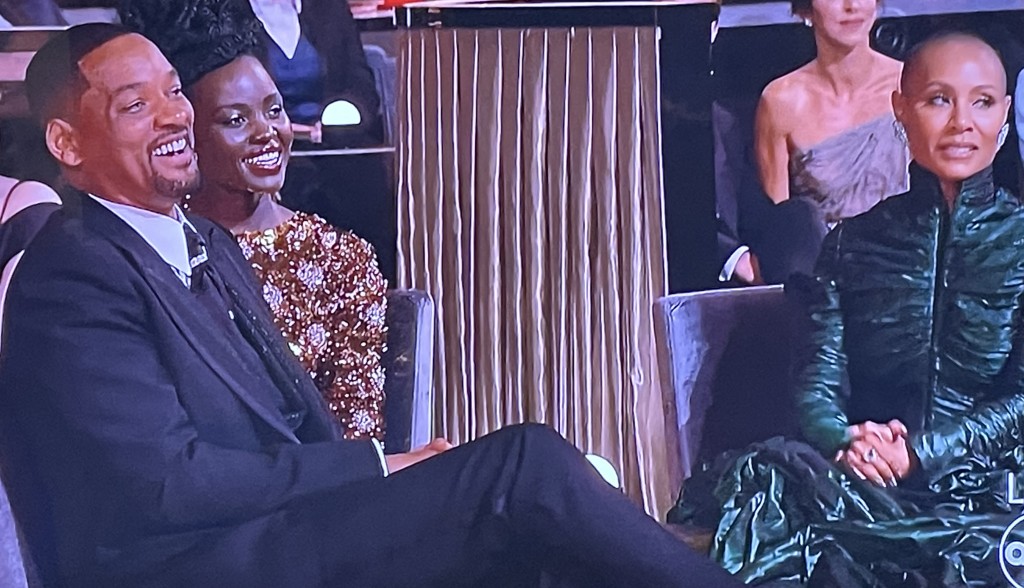 Will Smith, laughing at Chris Rock’s joke, (while his wife disapproves of it,) minutes before rushing the stage and slapping him. Photo by Karen Salkin.

It was probably the most benign joke that Chris has ever told. It wasn’t insulting at all, so when Will Smith jumped on stage and walked over to Chris, Chris was laughing along with the rest of us. We all thought it was what we show biz folks refer to as “a bit.” And then Will hauled-off and slapped him! For reals. It was horrible.

Will said he was defending his wife, but he had even just laughed at the GI Jane joke! Heartily! He laughed, and then sauntered on to the stage. Which means he had plenty of time to think it over and stop himself. So he can’t even lie and say it was in the heat of the moment because there’s all that video proof that it definitely was not.

I sure wish they had some footage of what happened in the minute between him happily laughing at Rock’s joke, then strolling on up there to be violent. My guess is that the always-controlling Jada told him to do that for her.

But they seemed absolutely fine when earlier in the telecast, Regina Hall, one of the three hosts of the show, intimated that they swing. She was doing a repulsive bit about swabbing male celebrities’ throats with the back of her tongue, (more on that tomorrow,) and was calling some men up to the stage for that bit of disgustingness. After she chose a few of them, she said, “Will Smith, you’re married, but you know what–you’re on the list, and it looks like Jada approved you. So you get on up here.” He declined to go, but both Smiths were laughing and applauding the whole time.

That bit harked back to the fact that the duo had to finally admit that Jada had been having an affair for years, with Will adding that they were not monogamous. And then, over the years, they’ve tried to walk back from all that. So, if they had to have a beef with someone at the Oscars, why not get angry at Hall for dredging-up their private lives in such a public forum??? That’s so much worse than the basically nothing joke that Chris made, so why didn’t Will defend his wife’s virtue at that point?

Conversely, they were both all smiles earlier, when one of the female hosts joked about making-out with Will! Photo by Karen Salkin.

And what if Smith had smacked Hall for her joke? Would the reaction of the assemblage and the producers, and the world, for that matter, be the same as it’s been for his assaulting a man?

As I tweeted when it happened, Smith should have been arrested for assault! After all, Chris has millions of witnesses!!! And he could have been seriously injured. If that hard slap had knocked him down, he could have hit his head and gotten a concussion, or worse. But he has turned the other cheek, and declined to press charges. Heck, I have a feeling that he’ll even be the one to apologize!!! (Although he definitely should not.)

And let me be the first to point-out, (because I haven’t seen it mentioned anywhere in these past two days,) that Chris Rock did nothing to retaliate! I have no idea how he held himself back; if someone assaulted me, weak as I am, I would have hit him back, pronto. But Chris stood there, in shock, with his hands behind his back, and didn’t even swear back at the foul-mouthed Will Smith, who cursed at him like he was any place other than the revered Oscars. 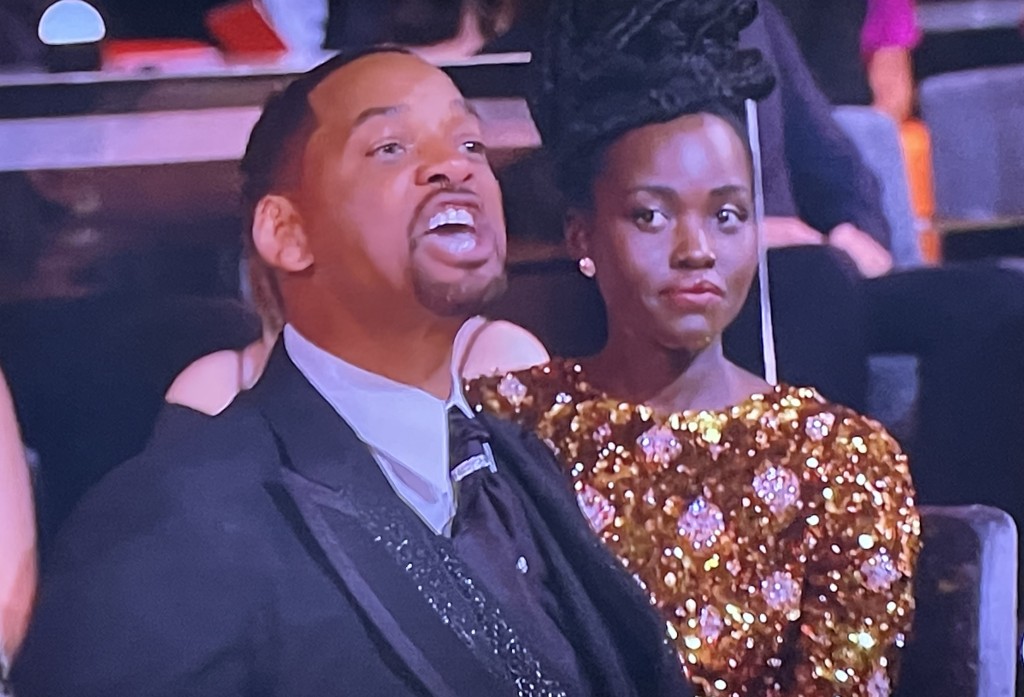 Will Smith, cursing Chris Rock out once he got back to the his seat in the audience. Note the shock on the face of Lupita Nyong’o. Photo by Karen Salkin.

When the slap happened, the sound was so loud that I, thinking it was a staged comedy bit, was impressed that the sound people could time it that exactly. I went back over it several times trying to figure-out how it had been accomplished. I deduced that somehow, Will had hit Chris’ microphone on purpose, as a gag. So when I moved the show on, and saw him screaming a profanity at Chris from the audience, I was in shock!

How did Will Smith have no control over himself, especially in such a public place as that??? He could have just gone backstage when Chris’ award presentation was over, and yelled at him. Was Smith not aware that he was up for an Oscar in a little bit???

By the way—nobody in the world knew that Jada has alopecia!!! I’m sure Chris Rock has better things to do than learn about whatever-the-heck goes on in that weird family. If he knew, he would have just made a joke about someone else. 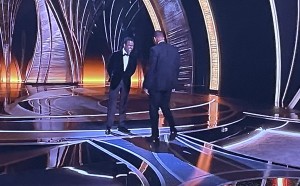 Chris Rock still thought that Will Smith was doing a “bit,” up until he got slapped. He’s still laughing at this point, and saying, “Uh-oh.” Photo by Karen Salkin.

Those two Smiths are so desperate for Hollywood to love them; they just can’t take being so reviled, which they are even moreso now.

Here’s an update since this horror show occurred:

The Academy of Motion Picture Arts and Sciences say that they “strongly considered” kicking Will Smith out of the Oscars ceremony after he slapped Chris Rock, and have now launched a formal review into the incident.

The statement they released yesterday reads, “The Academy condemns the actions of Mr. Smith at last night’s show. We have officially started a formal review around the incident and will explore further action and consequences in accordance with our Bylaws, Standards of Conduct, and California law.”

It’s good they’re doing that because the Academy’s Standards of Conduct state that it is “categorically opposed to any form of abuse.” But I have a feeling they’ll do nothing, except maybe kick him out of the Academy itself, if he’s even already in there.

All that being said, I’m torn over what they should do about this horrible situation. On one hand, he should have been thrown-out on the spot. And I do feel that he definitely needs to be stripped of his Oscar. Behaviors have consequences. 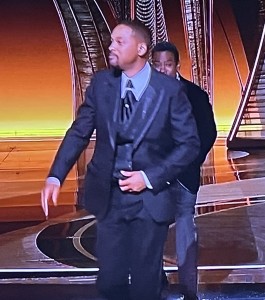 Will Smith walking back to his seat, after assaulting Chris Rock live on-air, looking satisfied with his rotten self. Photo by Karen Salkin.

But on the other hand, I would also feel terrible if an Oscar, (especially a deserved one, as in this case,) would be taken away for something outside of the voting on the performances. I voted for him for the Screen Actors Guild Awards, because even though I am soooooo not a fan, his work deserved it this year. Especially up against one of the weakest crops of actors ever. (For examples of stronger fields, Morgan Freeman would have won in any other year for Driving Miss Daisy, but he had to lose out to one of the most  incredible performances ever–Daniel-Day Lewis in My Left Foot. And Robert DeNiro had to win for Raging Bull, while John Hurt was also worthy for his astonishing portrayal of The Elephant Man. But this year, the other four nominees’ performances were just up to the standard of what movie stars should be doing, not anything above and beyond.)

Meanwhile, where have Smith’s publicists been in all of this?! Why haven’t they released some sort of “mea culpa” statement, even though we all know how insincere it would be. [Update since I first penned this article: Now we know where they were since the incident—crafting an apology to Chris supposedly from Smith, which he finally issued late yesterday. Too little, too late, in my opinion.]

Will Smith ended his acceptance speech later on that evening with, “I hope the Academy invites me back.” Let’s all hope they never do. (But I predict that Rock and Smith will be presenting, or even hosting, together next year! Bite my tongue. And that the show will go back to having a proper stage that won’t be as easy to jump on to!) 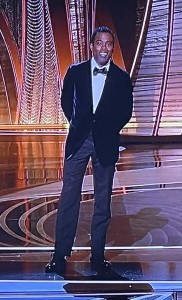 Chris Rock standing on stage in shock after getting bitch-slapped by Will Smith. Photo by Karen Salkin.

We do know one thing—all the talk show hosts are scrambling to book both those dudes, and anyone else who was in that front area of the audience the other night.

There’s one more truly sad and shameful aspect to this debacle. I always hear African-Americans say that they have to behave better than everyone else, which should not be the case, at all. But, if that does have even a modicum of truth, we all witnessed Will Smith shaming not only himself and his family, but his race, and setting their progress back decades. So now expect another “Oscars So White” next year.

I could go on and on about this slap topic. But Will Smith has wasted soooo much time out of all of our lives that I have to just move on now, and finish my review of the entire Oscars presentation. So I have to end this one here.

But please follow me on Twitter, @MajorCelebrity, to make sure not to miss the rest of my bon mots on this topic; you never know what else may occur to me at any time.

Update: With a day to think it all over, I predict that Will Smith, per his PR people, will enter rehab very soon, for both anger management and PTSD from his father abusing his mother. Most of us will see through that ploy, but I do hope the Academy lets him keep his Oscar, because it was voted on before the slap. But they really need to kick him out of the Academy and ban him from future Oscars. That’s the best solution for all.