So, the summer began and I was in hot, humid New York.  I had been working on clearing-out my little mother’s house in Brooklyn, pretty much all by myself, but with a little help from my friends, and with a broken back.  I looked like a used dishrag; my hair was fried, my nails were wrecks, my brows sad.  I knew I had to get better-looking to arrive back in L.A. and get back to partying already!  Enough with the Cinderella work!

So, I channeled my new go-to saying that came to me during those hardest of times in New York: WWCD?  That’s right, “what would Cinderella do?”  So, I conjured her going from the house-cleaning chick to the belle of the ball, and I knew that’s what I needed to do, as well.  But, with no fairy godmother anywhere in sight, what’s a girl to do?  Why, get oneself to Manhattan’s Angelo David Salon for a summer refresher, that’s what!

As many of you have read over the past year or so, I’ve been there a couple of other times (which you can read here: www.itsnotaboutme.tv/news/2011/06/03/new-yorkbeauty-angelo-david-salon and  www.itsnotaboutme.tv/news/2012/04/04/beautynew-york-angelo-david-salon-updates ) with great results.  I always felt like a new woman, and trust me on this one, never before have I needed that feeling so much.  So, off I went, and was rewarded with a truly lovely experience. 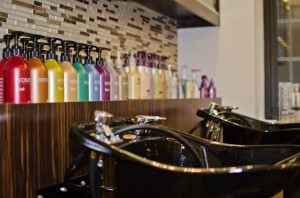 I just love this colorful picture that I requested Anna take! All photos by Anna Kader.

My east coast photographer and I got the same warm greeting we always get there. I was in desperate need of fresh hair color because the New York sun just does a dulling number on me. This time, I was hooked-up with Rita Cara, whom I had never met before. She was in the same vein as the rest of the personnel there, very pleasant and positive, and complimentary about my hair, not making fun of what the previous stylist had done. And even though my locks are now waist-length, she agreed that I needed just a trim, rather than a full-out cut. And she made my bangs so perfect that I couldn’t take my eyes off myself, even when doing some grueling packing the next night! And she did it all so simply and easily, with no grand flourishes. She didn’t make it about her; for once, it really was about me! 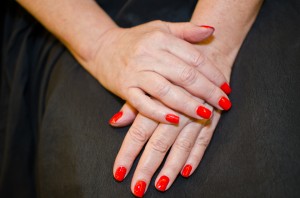 These were the shiniest nails ever!

I was reminded how accommodating the staff is about their clients’ time. While Marianna was doing a gorgeous, shiny manicure, (I chose Essie’s Fifth Avenue, mainly as a tribute to being in New York, but also because it’s a bright tangerine, which is still the hot color of the season,) Rita came up behind me (not in a scary way!,) and put a glaze on my hair. And I was once again double-teamed for the blow-dry, this time by Rita and Sianna. (I loved them but also missed my old bud from last time, Ivan.) I was so relaxed all day that I was practically asleep! (If the salon ever closes, they could all work for embalmers!)

Anna was so inspired when she saw my color that she sat right down and Rita did hers, too! It looked the richest I’ve ever seen it, and she was happy she got talked into doing it. (Shouldn’t everyone know to trust me by now???)

We finished-up our time at the salon by having out brows done by Julie Tussey. She does it all–tint, pluck, snip, and wax. It’s a potpourri of brow procedures!!! But do let her know if you’re in a rush; otherwise, it’s like a pajama party in her room. Anna and I went in together and Julie wound-up doing our make-up, too, since we were having such a good time dishing the Today Show, where Julie had just done a client’s make-up the morning before. Go with a pal, if you can, and you’ll get what I mean. 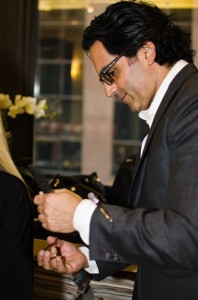 Angelo David himself, in action.

The best part of the day, to Anna, was seeing owner Angelo David’s handsome face. She came up to me and whispered, “What a handsome boss!” He had his dance card full of clients that day, but he still managed to spend a minute or two with us, as did host Cesar, and manager Carlos, both as upbeat and helpful as ever.

Just like last time, we didn’t want to waste our newfound good looks, so the only place to go was across the street to Cipriani Dolci, (in Grand Central Station,) for bellinis. (What else?) Anna had never had one before. (She’s Russian, so she’s used to blinis, not bellinis.) But she had three! Full strength! I went with almost virgins, because I like drinks in my own image. 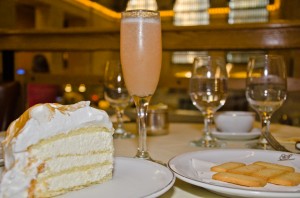 But this visit was even better than the last because we joined the adorable manager, Marco Arconte. How I missed his gorgeous face last time is a mystery to me! This guy has it all; looks, intelligence, charm, and a perfect sense of business. If ever he opens his own place, I plan to be first in line to dine there.

One last salon note, that came to me while I was watching ever second of Wimbledon coverage when I returned to L.A.: I actually feel bad to Rafael Nadal to point this out, but he could really use Angelo David’s couture hair additions, which they’re known for. He always has so much hair, but whenever he bent over, I noticed that he’s losing a bunch on top. He’s too young and handsome for that. So, Rafa, if you’re reading this, when you’re in New York for the US Open later this summer, get thyself to one of the salon’s private rooms and check it out. You’ll be as happy as Anna was with her color!