I couldn’t take a trip to New York and not visit my favorite hair salon there! I had been to the Angelo David Salon in the other three seasons, but never in the Fall, so I wanted to complete my all-season impressions of the experience. [Note: I had also never been there so close to a week-end before; they were absolutely packed, so I suggest you definitely make an appointment and try to not just show-up.]

Since it’s located right across from Grand Central Station, it’s really an easy subway ride from just about anywhere in the city. Just try to go during off-hours, if you can. (And definitely stroll through the shops in the station after to show off your spruced-up tresses.) 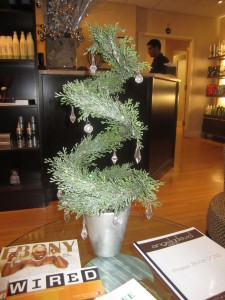 The festive waiting area, with a tiny glimpse of Ivan Torres in the background. Photo by Karen Salkin.

I was thrilled that I got stylist Ivan Torres again!!! (I could have, of course, requested him, but since I was time-constrained, I was willing to leave it to chance and go with whichever capable tonsorial artist was available at that early hour.) I first met him there in March, when he was just a newbie, and I was thrilled to see that even though he had moved up the ranks, he was the same fun, unaffected guy he was at the beginning of the year.

My favorite thing about Ivan, besides his talent, of course (!), is that he compliments the work of others. I asked if he thought I needed a trim, which I didn’t think I did since I had just had one a month before in Los Angeles, and Ivan said that I didn’t because I had a perfect cut! How’s that for a good, honest stylist???

With no drama, he got right to the color, which was perfect! He also did a gloss, which impressed even Mr. X, who sees my hair every day, so is usually immune to subtle changes in it. (And he may not even be that fond of it since he sees more of it than he wants to when he vacuums it up from the carpet. I have so much hair that you could make a small wig out of just the everyday sheddings!)

Betsy, my New York assistant who’s a total girly-girl like me, and has the most fun observations that she delivers in a wonderful deadpan way, came with me. (This is more amusing if you could hear her cadence, but, for example, as we walking along in Grand Central, she asked, “Know who I think is cute?” She’s twenty-one, so I expected “Justin Bieber” to be the answer. Without skipping a beat, she just matter-of-factly said, “Cops.” If they’re the Aspen force, I must say that I agree.) 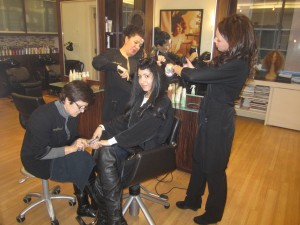 Betsy, getting tons of attention! Photo by Karen Salkin.

My favorite part of the day, (and hers, too!,) was looking around the corner of Ivan’s station, where I was seated, to Betsy’s side of it, and seeing her being attended by three women at once! It was like something out of The Princess Diaries! (In truth, I can only imagine a scene like that because I never saw that movie. But it was at least the scene from The Wizard of Oz where Dorothy and her pals were getting all dolled-up to meet the Wizard.) Pretty newcomer Joanna Gatanas was blowing Betsy’s hair, with Rita Cara pitching-in, while, at the same time, Marianna Kryekurti was doing her nails in gold! It was a perfect picture. She loved her nails and the way they made her super-curly hair straight but with waves at the ends. Very hip and young. 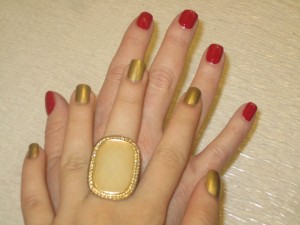 Betsy and Karen's manicures. How adorable is this shot??? Photo by Betsy Abramova, whose idea this shot was!

Speaking of young, when Marianna was doing my nails, (in three locations, no less, because she follows you around and does the manicure to accommodate you and your hair person,) I knew I wanted to go red, since the next day was December. I looked over all her bottles of Essie Polish, and immediately chose the best red. And it turned out it was named after me–Forever Young! Another instance of perfection at the salon. Betsy and I were marveling at just how shiny Marianna gets them! How does she do that??? 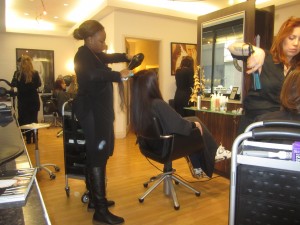 For part of the manicure time, Rebecca Jerome did my long, luxurious shampoo, and later on she blew it out, without even complaining about how long it takes to blow my hundred pounds of hair!

Then Ivan came back and put the finishing touches on my tresses, with the flourish that only he can deliver. 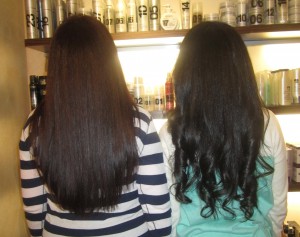 Karen and Betsy's results. Guess which is which? Photo by Angel Poyssick.

Post-beautification, Betsy and I relaxed in the waiting area for a bit, by their adorable little holiday tree that provides just the right touch, before heading over to the Holiday Fair at Grand Central across the street. It was perfect because we ran into some people who’ve seen me only in LA, and, thanks to the Angelo David Salon, they didn’t have a clue that East Coast Karen is usually a mess compared to West Coast Me. So, thanks Angelo, Ivan, and company, for helping to keep my double identity a secret!!!