Until my recent James Bay obsession, the song that has gotten to my soul more than any other is Sammy Davis, Jr.’s I’m Not Just Anyone. I first heard it when I was very young, and, to this day, it hits me where I live. And it’s not even the words—it’s Sammy’s amazing voice! He was one of the absolute most talented people who ever lived, and a lovely human being whom I’m proud to say I knew for the last few years of his life. And when he laughed at what I was saying, that was almost as much music to my ears as his singing voice was! 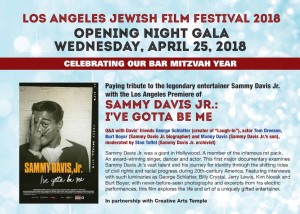 But I often forget that he was Jewish! So when I found-out that this year’s LA Jewish Film Festival was opening with the new documentary, Sammy Davis Jr.–I’ve Gotta Be Me, I was a bit surprised at first. But then I remembered that he’s a member of my tribe, which means that I doubly want to be there! And I suggest all Angelenos join me, no matter your ethnic persuasion.

The festival takes place over eight nights, (which, it just hit me, is like Passover and Channukah!,) beginning this Wednesday, and is centered in and around Beverly Hills, with many convenient theatre locations, including in the Valley and Westwood Village. More on the whole shebang in a moment, but first I must laud Sammy Davis, Jr. a bit longer.

I have so many of my own memories of Sammy, both as a fan and later a brief pal, so this film is of special interest to me. And it should be the same to his zillion fans around the world. But we in L.A. are the lucky ones who get to be the first people to see it. 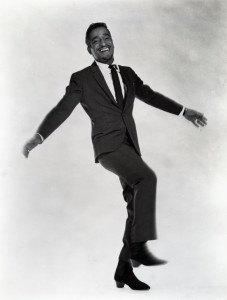 I really do consider Sammy Davis, Jr. to have the greatest voice ever. He was actually probably the greatest overall performer, too. The guy could sing, dance, act, and be funny.

And he was really nice to me. He welcomed me into his home as though we were old friends. I also enjoyed spending time with his lovely wife, Altovise, and their young son, Manny, whom Sammy was always happy I was taking out for a fun adventure. I loved it when he asked, “What are you kids up to today?” Manny was just adorable back then; it’s strange that he’s more grown-up than I am now! I can’t wait to have a reunion with him on the opening night of the LA Jewish Film Festival.

I got a sneak peek of this documentary recently, and I must say that it captures so many aspects of Sammy’s illustrious career. And life. There are a lot of events in there that I was not aware of; I was happy to be so enlightened.

But the highlight for me will be seeing excerpts from Sammy’s first on-screen appearance, in the 1933 short film, Rufus Jones For President, on a big screen. Those pieces are not to be missed! I’ve seen those numbers several times throughout my life, but never on a big screen. I can’t wait for the LA JFF opening night, just for that!

And this film is just the start of the Jewish Film Festival! It closes with another documentary, which features one of the most clever titles ever, If You’re Not in the Obit, Eat Breakfast. 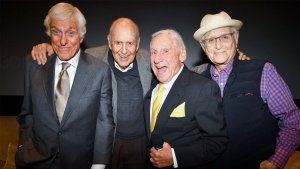 Dick Van Dyke, Carl Reiner, Mel Brooks, and Norman Lear from the documentary, “If You’re Not in the Obit, Eat Breakfast.”

And Carl Reiner is due to be there, doing the Q-and-A, which is bound to be a riot.

In between the two are some good choices, as well. The 1935 version of A Midsummer Night’s Dream, directed by Austrian Jew, Max Reinhardt, is of particular interest to this classic film lover. I’m actually very excited about all the opportunities this festival is affording us this year. So I hope to see all of my Los Angeles readers there throughout the week. We’ll all enjoy together!

For more info and the schedule of screenings, please go to www.lajfilmfest.org.